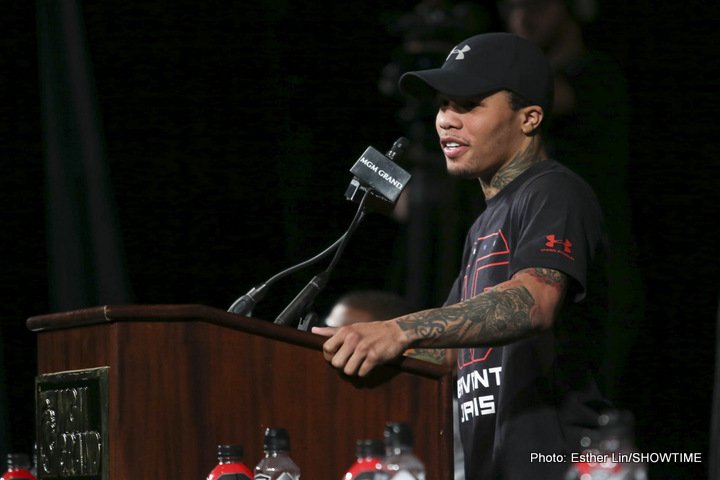 By Allan Fox: In a huge blow to Floyd Mayweather’s promotional company, IBF super featherweight champion Gervonta Davis (18-0, 17 KOs) came in 2 pounds over the 130 lb. limit on Friday at the weigh-in for his title defense against #7 IBF Francisco Fonseca (19-0-1, 13 KOs) for their fight on Saturday night at T-Mobile Arena in Las Vegas, Nevada.

Davis coming in over the limit means he’s been stripped of his International Boxing Federation title. Fonseca, 23, has a chance to win the now vacant IBF super featherweight title. Fonseca isn’t expected to win the fight, however. Davis is just a much better fighter. With Davis’ weight advantage, he’s likely going to stomp Fonseca tomorrow night.

Davis, 22, appears to have misjudged his weight for the fight, because coming in 2 lbs. over the limit is not a small mistake with the weight. He had to have been having a hard time the entire week trying to take the weight off.

Now the big question is what does Davis do? He can try and get a quick shot at the IBF title if he can still make the 130 lb. limit or he can move up to 135 to start campaigning as a lightweight. At 5’6”, Davis would be small for the lightweight division. WBC lightweight champion Mikey Garcia is 5’7”, and IBF champ Robert Easter Jr. is 5’10”. WBO champion Terry Flanagan is 5’9”.

Davis might not have the size to fight in the lightweight division. As such, he’s going to need to find a way to get his weight back down so he can continue to fight in the super featherweight division. At Davis’ age, he’s likely going to be putting on more and more weight as time goes by. Davis is going to wind up at lightweight whether he likes it or not. He’s still growing, and he’s not going to be able to keep his weight down at the 130 lb. limit by draining himself.

Having one of his Mayweather Promotions fighters holding a world title was a big feather in the cap of promoter Mayweather Jr. He takes pride in his fighters, and he took a special interest in guiding the career of the 22-year-old Davis. But for some reason, he didn’t make the weigh and now he’s got to start all over trying to win back the IBF belt if that’s what he wants to do.

Davis won the IBF title earlier this year in stopping champion Jose Pedraza in the 7th round. Davis defended the title once in beating Liam Walsh by a 3rd round TKO on May 20. It was an impressive performance from Davis, who looked like a star in the making for the 130 lb. division.

Unfortunately the long title reign that Mayweather has envisioned for Davis ended abruptly today after just one successful title defense.