Broner: “I will be champion again” 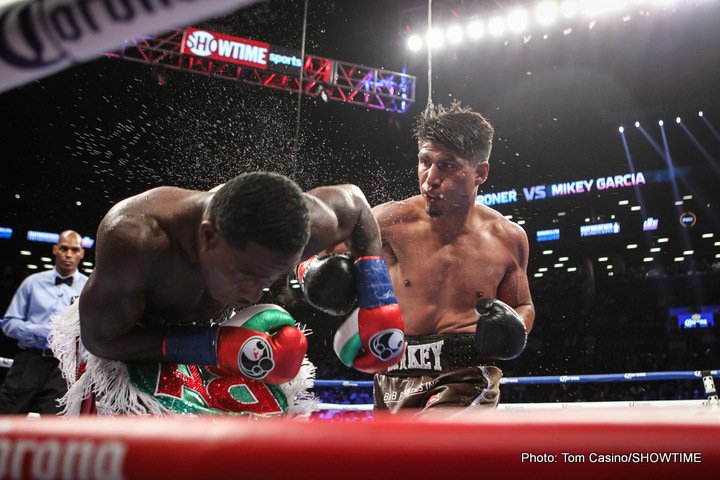 By Chris Williams: Adrien “The Problem” Broner (33-3, 24 KOs) isn’t fazed by his loss to Mikey Garcia (37-0, 30 Kos) from last Saturday night. Broner says he’ll fight Garcia again if he wants to. He’ll fight him in California if he wants to do a rematch. If not, Broner is going to sit down with his adviser Al Haymon and map out which direction to take his career.

Broner, 28, chose not to attend the post-fight press conference following his 12 round unanimous decision loss to Garcia at the Barclays Center in Brooklyn, New York. Broner lost the fight by the scores 116-112, 116-112 and 117-111. The judges’ scores were fair. There’s no dispute about Garcia being the better man. What Broner didn’t like was how Mikey ran from him in the later part of the fight. Broner understood why Garcia did that. He had a big lead, and he was going to sit on it to win a decision. It wasn’t the way you like to see fighters compete, especially when they’re to become a big star. Garcia did not fight like a guy that was trying to take his career to the next level to win fans. The boxing fans at ringside were booing the lack of action from the 8th. It wasn’t because of Broner that the fans were booing. He was the one pushing the fight.

“You win some you lose some,” said Broner to Fighthype after his fight with Garcia. “No, he ran. We’ve been there before. I’ll be champion again. This is part of boxing. At the end of the day, not everybody is undefeated like Floyd Mayweather. When it comes to history and the greats, not everybody is undefeated. Everybody go 1, 2 or 3 losses. It’s what you do after the loss,” said Broner.

Garcia didn’t run in the first part of the fight. He was building a lead by landing power shots. Broner was using his jab, and he wasn’t throwing enough of his power shots to win the rounds. That was a mistake on Broner’s part, and I’m sure he would be the first to admit it today. He knows what he did wrong. If he gets a second chance to fight Garcia, I’m sure he’ll fix the mistakes and try and avenge the loss. Garcia isn’t going to fight him again. Let’s be honest about that. Garcia is going back down to 135. He already said that last night at the post-fight press conference. There won’t be a rematch with Broner, which is too bad because we won’t get a chance to see what changes “The Problem” can make to try and avenge his defeat.

“For sure, he was definitely going on the decline, but he was up on the scorecards, so he played the game,” said Broner about Garcia. “I ain’t mad at him. I’m happy for him. I’ll be world champion real soon. I just turned 28. My career ain’t over. I got a long ways to go. We going to go to the drawing board with Al Haymon. We’re going to do what’s best for me,” said Broner.

This is definitely not the end of Broner’s career. He’s still in the prime of his career at 28. Broner’s loss to Garcia was more of a combination of bad tactics, and weight loss. Broner didn’t have the power on his shots that we’re used to seeing. The only thing you can blame that on is the weight. Broner took too much weight off for the fight.

As I said before, Broner should have rehydrated to 160 for the fight. He looked like he was no more than 145 on the night of the fight. In comparison, Mikey looked a lot thicker than Broner. He was bigger and stronger because he did a better job of managing his weight for the fight. If I had been working as Broner’s trainer instead of Michael Stafford, I’d have had him at 160 on the night of the fight. He’d have had a lot more muscle and power to go after Mikey with his shots and hurt him. Broner’s muscles looked stringy from too much weight loss. He looked more like a basketball player than a boxer. I don’t know if it was Stafford that was working with Broner on losing weight for the fight. Whoever it was, they let him get too low. Broner should have been much heavier in my opinion. Mikey won the fight from the weight, not from his boxing skills.

Garcia was fading near the end. The power on his shots dropped off dramatically, and he must have realized it, because he started moving a lot. We saw the same thing from Garcia in his fight against Orlando Salido in 2013. Garcia started out strong in that fight too, but then by the 7th, he had lost the zip on his shots and he started to take punishment. At the end of the 8th, Garcia’s trainer Robert Garcia pulled him out of the fight. His nose was injured. Salido’s nose was injured too, but his trainer didn’t pull him out of the fight.

“If I fight tomorrow, everybody in this mother –[expletive] hall will still come and see me,” said Broner via Fight News. “At the end of the day I’m still AB, I’m still about billions, I’m still the ‘can man,’ I’m still a fighting mother-[expletive] and anybody still can get it,” said Broner.

Broner will still bring in the boxing fans when he fights again. That’s the reality. The fans like to see Broner fight because he’s talented, exciting and he puts in a good performance every time. This isn’t the end for Broner just because he lost to Garcia. Broner will be looking to bounce back and win a world title.

Broner didn’t say who he wants to fight next. He said that he’ll be talking to Al Haymon to make that decision. Broner has options. He can fight the winner of the Terence Crawford vs. Julius Indongo fight. Broner can move up in weight to welterweight and compete there. Broner can also move down to lightweight a 135. Stafford says Broner could have made 135 if he wanted to. It wouldn’t have been a problem for him. That might be a good division for Broner. He could fight the winner of the Jorge Linares vs. Luke Campbell fight or go after WBO champion Terry Flanagan or IBF champion Robert Easter Jr. He’s friends with Broner, so it’s not likely those two will ever fight each other.

”If he wants to rematch in California, we can do it,” said Broner about Mikey Garcia. ”t the end of the day, I’m still a four-time world champion at four different weight classes and I’ll still be in the history books.”

The only way Broner and Garcia ever fight each other again is if Broner builds his career back up, and starts making some big things happen. Garcia is going to need to move up to 140 sooner or later. There aren’t any big names for Mikey to fight at 135. That’s more of a foxhole for Mikey. It’s safe for Garcia to stay at 135. If he moves up to 140, the boxing fans will be expecting him to fight Crawford or Indongo. I don’t think Mikey wants to do that.

“Yeah, I’m good. I didn’t take no punishment,” said Broner. “He was the better man tonight. Mark my words; I will be world champion again real soon. I can’t say I’m proud of my performance.”

Broner got out of the fight looking unmarked last night. I didn’t see any swelling or cuts on Broner’s face. Mikey doesn’t hit hard enough at 140 for him to do damage.

“Mikey put on a hell of a performance,” said Mayweather Promotions CEO Leonard Ellerbe to ES News Reporting. “Congratulations to Mikey and his team. He showed that he was the better man tonight.” 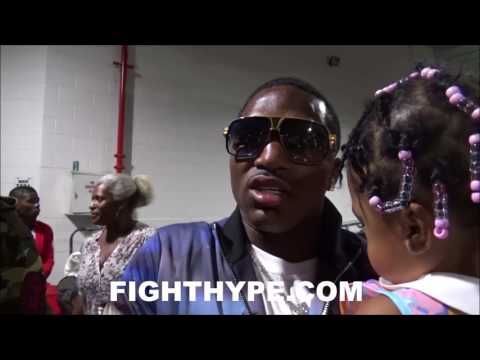 
« Spence says Broner will bounce back from defeat