The eye of the Brook 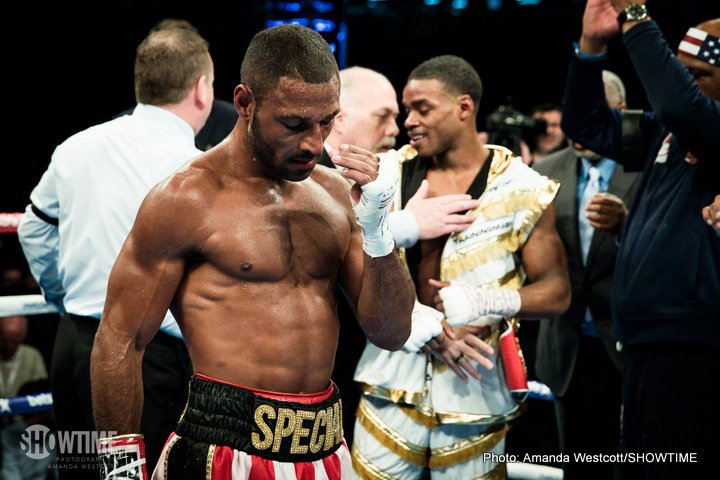 By Adam Godfrey: For two fights in succession, former IBF Welterweight World Champion Kell Brook elected to take on men considered within the top ten pound-for-pound punchers in the world. First up was Gennady Golovkin, who looked nailed on to face British contender Chris Eubank Jr. (more on that later) before Brook stepped in at the last minute.

Golovkin blew Brook away within six rounds, the man stepping up in weight simply unable to handle the power of a well-established, dominant Middleweight. Brook fought well at times in his losing effort, and did his reputation no harm despite the hammering he received.

Following that loss, not an ignoble one by any stretch of the imagination, Brook underwent invasive surgery to fix a broken eye socket, viciously inflicted upon him by Golovkin. Speculation as to Brook’s next move was to be rife. Many felt that he would vacate his IBF title if the prospect of coming back down in weight was too much of a burden. This would result in him beginning to campaign at the 154lb Junior Middleweight division. Or he could press for a voluntary (in other words, soft) defence of his Welterweight title to ease his way back in at his career division. Others still felt that retirement may be an option, such was the severity of the injury sustained by Brook. No sporting accolade is worth losing one’s eyesight over, of course.

Instead, Brook showed once again that he is not one to duck a challenge. To the contrary, Brook elected to honour his mandatory IBF opponent and defend against the much-vaunted American knockout artist Errol Spence Jr. Any suggestion that Brook was a fighter with questionable heart should have stopped definitively at that point; Brook’s willingness to throw himself from the frying pan into the fire is becoming increasingly rare in the world of Boxing.

Although his eye had purportedly healed and was unlikely to cause a problem (a titanium plate had been inserted to give it stability), certainly it would be put to scrutiny against the hard hitting American in a way that it was unlikely to be against anyone else in the division.

Brook edged the first half of his fight against Spence, but was gradually broken down by his foe, and by the end of the tenth a familiar and disheartening sight for Brook fans unfolded; periodic pawing of the eye, this time the left, and a fighter suddenly on his skates. Brook remained competitive enough that the referee was unlikely to step in and end the fight, but there was a sense of inevitability that Dominic Ingle, Brook’s long-time trainer, would step in or Brook would end the fight himself, which he eventually did in the eleventh upon a knee.

Cue much debate as to whether Brook had quit, whether he was justified to if indeed he had refused to continue, and what the future would hold for him now he lost two fights in a row by TKO.

My view is simple. If Brook decided not to continue, nobody should hold that against him. He hadn’t simply had the will beaten out of him as had Willie Monroe Jr, Daniel Geale and Curtis Stevens had against Golovkin. Nor was he perplexed and frustrated by his opponent’s skill, emotions that got the better of Nicholas Walters when he quit against a rampant Vasyl Lomachenko. The circumstances around the Brook stoppage by Spence were unique, in that he had inflicted upon him exactly the same injury through which he had already suffered once before and had only recovered from mere months previously. It is possible that Brook has an issue with brittleness of the bones around his eye. It would be a huge and very unfortunate coincidence if the recurring injury is simply down to bad luck. But no doubt Brook had learned a lot about the potential long-term damage that can be caused to an orbital bone being punched ferociously once it has already been broken. His doctors, his surgeon and the team that rehabilitated him after surgery the last time around would surely have given him all the advice and knowledge that he would ever need. Brook is a dedicated Boxer, but also a dedicated family man, who presumably would like to see his children with both eyes still functioning.

To hear the denigration of both the decision to pull out of the fight and the man himself is both disappointing and very worrying. Boxing is a brutal sport where people get punched in the face, but it is also one where there are very few serious injuries considering its violent nature, and it is the responsibility of both the fighter and the fighter’s team to stop the duel if a serious injury is likely to occur. This is for the good of the sport itself and for its perception, as well as to those who partake. Fans do not want to see a fighter going to hospital with a career or life-threatening injury, and it is very strange to hear commentators suggest that Brook’s pride is more important than his health. It is not.

One fighter who should know better than others the damage that can be inflicted upon a person who is unwilling to or physically cannot quit is Chris Eubank Senior. In September 1991, Eubank fought Michael Watson in a rematch following their first fight several months before. Early in the 12th, after Watson had already received massive punishment, Eubank finished the fight by unleashing a flurry of blows against which Watson could not defend himself. Watson slumped into the corner, and for eight minutes was left unattended by any medical professional. He endured six operations to remove a blood clot from his brain and has spent the rest of his life trying to claw back a semblance of normality, but still struggles to walk or speak.

What’s more, his own son has put a beating upon an opponent so severe that the other fighter ended in a coma. In 2016 Junior subjected Nick Blackwell to such a ferocious pasting that the Trowbridge based fighter suffered bleeding on the brain and was also medically induced into a coma. Blackwell has since made a recovery of sorts, but has retired from Boxing.

To hear, therefore, Chris Eubank criticize Brook’s heart is infuriating, and it might be worth him remembering that the only reason Brook was ever in the ring with Golovkin to get his eye socket broken in the first place is because Chris Eubank Jr. seemingly lost his nerve when his own fight against Golovkin was within touching distance. Golovkin v Eubank seemed nailed down until Eubank Sr. began making ridiculous demands, which suggests that his son, the challenger, was a bigger draw than in reality he was. The cynics among the Boxing fraternity could even argue that he was protecting his son from the likely battering that awaited him at the fists of the Kazakh Champion, and that Brook refused to duck the challenge after ‘Team Eubank’ folded under the pressure.

Boxers are warriors and they compete in a sport where the risks are enormous. Most of us will never understand the lengths these men go to for their sport. But for the most part, they are not idiots, and nor should they be treated as such when they make a difficult decision for the good of their health.