Jermall Charlo a BIG threat to Canelo and Golovkin 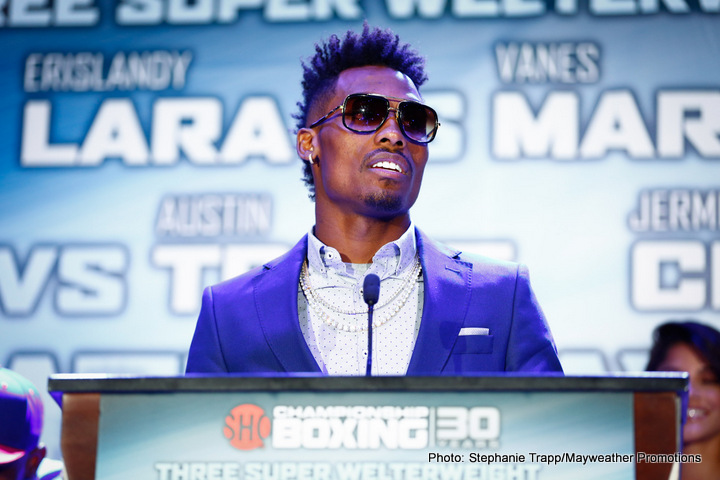 By Jeff Aranow: Former IBF junior middleweight champion Jermall Charlo (25-0, 19 KOs) recently moved up to the 160 pound division, and he’s already the biggest threat to Gennady “GGG” Golovkin, Saul “Canelo” Alvarez and Danny Jacobs. Jermall is ranked No.2 by the World Boxing Council at 160, and he could soon by facing #1 WBC Jorge Sebastian Heiland in a WBC middleweight title eliminator on July 29 on the Adrien Broner vs. Mikey Garcia card. That’s next month.

Charlo is likely going to call out the winner of the Canelo-Golovkin fight immediately after the fight if he beats Heiland to become the WBC 160 lb. mandatory challenger. It’ll play well having Charlo call out Canelo and Golovkin on July 29. Charlo will be knocking on the door of Golovkin to get a title shot against him or Canelo if he beats Golovkin in their fight on September 16 at the T-Mobile Arena in Las Vegas, Nevada.

The WBC is making it easy for Charlo to go after Golovkin by them giving him a #2 ranking in the middleweight title. This is the same thing that the WBC did in the past in giving Golovkin a high ranked with their organization when Canelo Alvarez was their WBC middleweight title. Unfortunately, Canelo vacated his title rather than fight Golovkin.

The fallout from that move was pretty bad for Canelo, as lot of boxing fans criticized him without end for giving up his belt in order not to fight Golovkin. It would be surprising if Golovkin makes the same move to avoid fighting Charlo if he becomes the No.1 WBC contender in the near future. It just doesn’t seem like a move that Golovkin would make. However, Golovkin’s trainer Abel Sanchez has been doing a lot of talking about Golovkin moving up to super middleweight at the end of the year.

I don’t know why Golovkin would want to move up to 168. Some boxing fans would suspect that GGG is running from Charlo? If Golovkin is going to move up to super middleweight, he should ideally do it after he faces Charlo. Golovkin also has unfinished business with Danny Jacobs, who he barely beat in his recent fight with him last March.

Charlo is like a faster, more powerful and a lot more talented version of Tommy Hearns. Charlo is a middleweight version of Hearns. Charlo can do everything boxing great Hearns was able to do, but a lot better in my opinion. Golovkin would need to do a lot more than just jabbing if he wants to survive to the final bell against Charlo. Golovkin won’t win if he fights Charlo in the same conservative manner that he did against Jacobs. GGG has got to do a lot more than that for him to beat someone like Charlo. Golovkin will need to actually get in there and go to war with Charlo. If he doesn’t, Golovkin will get taken out with one of Charlo’s bombs.

Thus far, not much is being said about the 27-year-old Charlo, but you can bet that there will soon be a lot being said about him. The hard hitting Charlo has one-punch power with either hand, and he’s got excellent hand speed to go along with that power. Charlo recently destroyed a very good fighter in Julian “J-Rock” Williams in 5 rounds last December.

Williams is someone that would likely give Canelo, Golovkin and Jacobs’s real problems with his punching power and boxing skills. It wasn’t a small thing that Charlo was able to destroy Williams so easily. That was very impressive what Charlo did.

For the boxing fans that have only heard of WBC junior middleweight champion Jermell Charlo, Jermall Charlo is the harder hitting twin brother. Jermell hits hard too and has tons of talent, but he’s not the same brute that Jermall is. There’s a world of difference in how the two of them fight. Jermall is like a panther the way he springs on his opponents and quickly takes them out.

Jermell is more methodical with his approach to winning his fights. Jermell likes to set traps before he unloads with his big shots. Jermall just goes out and smashes his opponents to the canvas as fast as he can. Jermall’s coming out part was his 3rd round knockout win over Cornelius Bundrage on September 12, 2015. No one had thought that Charlo would obliterate Bundrage the way he did. It was shocking.

The winner of the Canelo vs. Golovkin fight is going to need to make up their mind whether they want to keep the WBC title, because if they hold onto that belt, they’re going to have to fight Charlo before long. It might look better for the Canelo-GGG winner to give up the WBC belt BEFORE Charlo becomes their mandatory challenger rather than afterwards. The boxing fans will think that Canelo or Golovkin is ducking Charlo if they give up the title after he becomes the mandatory. It’s going to look bad for Canelo and Golovkin either way if they don’t fight Charlo.

You can’t ignore someone with that kind of talent. In the case of the 35-year-old Golovkin, he should try and get it over with as fast as possible by fighting Charlo right away. The longer Golovkin waits to make that fight the more it helps Charlo. Charlo has got another good 10 years ahead of him in his boxing career. Golovkin has probably got 2 to 3 good years left before he starts to fade as a fighter. Golovkin will likely continue to be a powerful fighter into his early 40s, but his hand speed and reflexes will slow, which make him susceptible to guys like Charlo and whoever else emerges in the next 5 years.

Besides Charlo, we could soon see the likes of Demetrius Andrade and Jermell Charlo moving up to the middleweight division to chase down Canelo and Golovkin. Those guys are quite talented as well. I don’t rate them in the same class as Jermall Charlo, but they’re at least one or two rungs down the food chain. Those would both be tough outs for Canelo and Golovkin, especially Canelo. I think Charlo and Andrade would be too big for Canelo. They would do the same thing that Floyd Mayweather Jr. did in beating him by using their jabs to pound out a one-sided 12 round decision.

Whether Canelo beats Golovkin or not, I don’t think his promoters at Golden Boy Promotions are going to let Canelo fight the likes of the Charlo brothers or Andrade. They didn’t have Canelo fighting any of them when they were all fighting at 154 at the same time. I can’t see that changing now that Canelo is fighting at 160. Jermell is arguably the better fighter of the two in comparison to Demetrius Andrade.

Jermell needs to move up to 160 as well. He’s not going to make tons of money fighting the less popular fighters at 154. Jermell needs to move up to 160 and go after the WBO title or one of the belts that Golovkin gives up when he vacates his strap at the end of the year. Jermell vs. Jacobs would be a great fight. I’d pick Jermell to win that fight with the way he’s been looking lately. He’s sitting down on his shots a lot more now, and he seems to have really improved his game. Jermell is starting to become like another Jermall in terms of his punching power and his attitude inside the ring.

Hearn hints Anthony Joshua could vacate one of his titles »