Hearn hints Anthony Joshua could vacate one of his titles 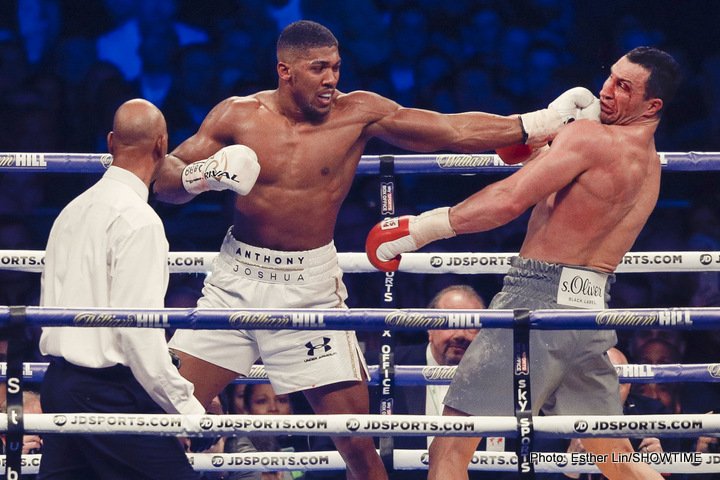 By Jeff Aranow: Matchroom Sport promoter Eddie Hearn says his fighter IBF/WBA heavyweight champion Anthony Joshua could wind up vacating one of his titles if a fight that one of the sanctioning bodies orders him to take isn’t one that the boxing public is particularly interested in seeing.

As of now, the International Boxing Federation wants Joshua to face 36-year-old Kubrat Pulev (25-1, 13 KOs) after Joshua faces Wladimir Klitschko in a rematch. The IBF has granted Joshua permission to take the fight with the 41-year-old Wladimir next, but they’ve given a deadline for when the fight has to take place by December 2 this year. If Wladimir can’t make the rematch with Joshua until after that that date, then presumably the IBF would strip Joshua of his title. Joshua could beat them to it by vacating the title now and then focusing his attention on taking the fights that he wants to.

Joshua would need to fight Pulev in the first quarter of 2018. That’s not a fight that would attract a lot of interest in the UK, as Pulev has done very little to make himself into a star. Pulev did fight for a world title against Wladimir in 2014, and he was knocked out in 5 rounds. Pulev has since won his last 5 fights against largely journeyman level opposition with the exception of his fight with Dereck Chisora in 2016.

Hearn sees Joshua soon being bigger than the world titles. But for the time being, Joshua still wants to collect all the world title belts so that he can be the undisputed heavyweight champion. For Joshua to do that, he’ll need to beat Wladimir in a rematch, and then defeat Pulev, WBC champion Deontay Wilder and WBO champion Joseph Parker.

Joshua would need to hope that the World Boxing Association doesn’t order him to one of their mandatory challengers as well. It could take Joshua a lot longer than he had previously hoped if the different sanctioning bodies start ordering him to fight different guys in their organization. That’s the major negative about Joshua collecting titles. He’ll end up wasting a lot of time dealing with the politics of boxing instead of getting on to more important fights that the fans care about.

“I have said before and I’ll say it again,” said Joshua’s promoter Eddie Hearn to skysports.com. ”We will not let politics get in the way of the progression of Anthony Joshua, of where we want to take Anthony Joshua, of where he wants to go, of what ground he wants to break. We have to be smart, of course follow the rules, accept the rules and make the right decisions for his career.”

Hearn could save the 27-year-old Joshua a lot of time and trouble if he would have him vacate the IBF title right now so that he doesn’t get stuck defending it against Kubrat Pulev. Joshua has some important fights that he wants to get out of the way against Wilder, Parker, Tyson Fury and Dillian Whyte.

Having to defend against guys that don’t bring much to the table like Pulev is a time waster. Joshua can always pick up the IBF title later on against whoever wins the title after he vacates it. I don’t know if it would really matter. The casual boxing fans aren’t going to think less of Joshua if he doesn’t hold all the titles in the heavyweight division. As long as Joshua has one of the world titles, it’s enough for him to be seen as a valid champion. Having the other titles in Joshua’s possession would only impress the hardcore boxing fans and not the casual fans, which aren’t aware that there are 4 separate titles at heavyweight.

There are a handful of interesting fights for Joshua and they are as follows:

The above mentioned heavyweights in bold are the ones that will bring the most interest from fans for Joshua. Pulev fits in more with the rest of the division as far as being someone that won’t interest in a lot of the boxing public both in the UK and worldwide.

”There comes a moment and a time where the fighter becomes more than the belts, and Joshua is on his way to doing that,” said Hearn.

Joshua was already incredibly popular in the UK even before he captured the IBF title. I don’t think it changed a lot after Joshua won the IBF belt off of Charles Martin. What increased Joshua’s popularity was the fight against Klitschko, not the addition of the vacant World Boxing Association heavyweight title that he won in that fight. That didn’t do much to increase Joshua’s status.

Beating Wladimir was the main thing the fans were interested in. At this point, chasing titles isn’t going to make Joshua a bigger superstar. He needs to fight bigger names in the division like Parker, Wilder, Klitschko, Haye and Tyson Fury. In some respects, Joshua would be better off holding down a title like the IBO belt. It would still be a title, and he might be able to face the best guys without getting stuck having to defend against guys that the fans aren’t interested in seeing him fight.

It’s up to Joshua if he wants to collect all the titles and use up his valuable career making voluntary defenses to the various mandatory challengers. We saw how Wladimir ended up taking a lot of time to making voluntary defenses of his world title belts during his 10-year reign as a heavyweight world champion. If Wladimir only had one title instead of 4, he would have had things a lot easier with him being able to fight whoever he pleased most of the time. Joshua is putting himself in the same position as Wladimir now with him deciding that it’s important for him to collect titles instead of seeking out the biggest fights that the boxing public is interested in seeing.

Hearn realizes how hard it’s going to be for Joshua to keep all his titles that he collects. By spending time fighting guys like Pulev, Joshua could wind up missing out on a fight with Parker or Wilder. Both of those champions are vulnerable. They can be beaten at any time. We saw how poor Parker looked in his recent win over Razvan Cojanu. Wilder has always looked shaky ever since he won the WBC title in 2015 against Bermane Stiverne. Wilder could wind up facing Stiverne soon, and that’s a toss-up fight. Wilder was lucky to avoid getting hit by Stiverne’s big power shots in beating him in 2015. But in a rematch, Stiverne might connect with one of his big shots and end up knocking Wilder out. So instead of Joshua fighting a popular guy like Wilder, he could get stuck fighting Stiverne for the WBC title, and the boxing public would be less than thrilled at that fight.

If the Pulev fight is going to get in the way of Joshua fighting Wilder, then maybe he needs to think seriously about vacating the IBF belt so he can fight who he pleased right now instead of a guy that the IBF wants him to fight. Parker could lose his title to Hughie Fury in his next fight. Joshua vs. Hughie wouldn’t be a bad fight, but it might be more interesting to the fans to see Joshua-Parker, because he’s got some punching power and he would be looking to land his big shots. Hughie Fury is more of a finesse type of fighter, and it would be a lot of movement and holding with him in trying to survive for 12 rounds against Joshua.

Hearn wants to make a rematch between Joshua and Whyte. That would be a great fight to make after the Joshua-Klitschko II rematch. Unfortunately, Joshua won’t be able to face Whyte until the second half of 2018 if he gets stuck fighting Pulev in early 2018. That’s not good news. Whyte is a fight that would bring in a lot of PPV buys on Sky Box Office. Pulev is not a fight that will do much business in the PPV market. That’s the equivalent of Joshua fighting Eric Molina again. That’s a fight that was not an interesting one for the fans.

There’s a lot of things that Joshua wants to do with his career. If he’s tied down making voluntary defenses of his belts, he’s not going to be able to achieve nearly as much as he otherwise could. In the end, Joshua’s goal of collecting and holding down all the heavyweight world titles could wind up slowing his down and limiting his potential growth as a superstar. Mexican star Saul Canelo Alvarez is smart not to spend valuable time collecting world titles at 154 and 160.

On one hand, the champion is facing someone that is no threat to beating him, but on the other hand, the guys aren’t popular enough to further the career of the champion. Collecting world titles is important for a fighter that doesn’t have a large fan base. You need to be a champion to win fans if you’re not well known. But if you have a large build in fan base like Canelo does with his Mexican boxing fans in the U.S, and Joshua has in the UK with his British fans, then you really don’t need to collect world titles, because it works against you in keeping the belts. Joshua should be looking to make every fight count right now by facing only the heavyweights the boxing public wants to see. Later on is the time for Joshua to face the lesser names after he’s established himself as a worldwide star.


« Jermall Charlo a BIG threat to Canelo and Golovkin