Khan on Brook quitting: “You’d rather get knocked out” 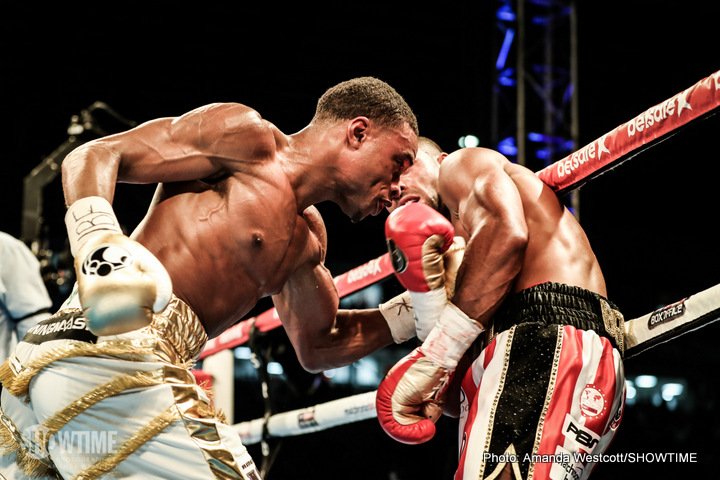 By Scott Gilfoid: Former IBF welterweight champion Kell Brook (36-2, 25 KOs) had a number of fighters taking shots at him last Saturday night following him taking a knee and appearing to quit in the 11th round in his title defense against Errol Spence Jr. (22-0, 19 KOs) at Bramall Lane, in Sheffield, England.

Amir Khan, Tony Bellew and Chris Eubank Jr. all had things to say about the way Brook chose to end his fight with Spence. Brook was pretty worked up about it. He seemed upset at seeing Brook take a knee.

Khan says it would be better to be knocked out than to take a knee. Khan obviously thinks it’s better for a fighter to go out on his shield than to surrender on a knee to his opponent. Khan has never has surrendered. He’s been knocked out instead. There are some boxing fans that think Brook also quit in his 5th round TKO loss to Gennady Golovkin last year at the O2 Arena in London, England. In that fight, Brook suddenly stopped throwing punches in the 5th round, which led to his trainer Dominic Ingle throwing in the towel to keep him from hurt.

“You’d rather just get knocked out sometime or get hit with a big shot rather than taking a knee and saying, ‘Count me out,’” said Khan last Saturday night following Brook’s 11th round knockout loss to Spence. “As a fighter, you train for months for a fight. Your title means more than anything in your life.”

It’s unclear what the disconnect was in the fight not being stopped in the corner rather than Brook having to take a knee in the 11th. After Brook got worked over in the 10th, you would think that the fight should have been stopped after the round had ended if not during the round. Brook had taken a knee in the 10th to escape punishment. It was clear that Brook was not going to be able to come back to get the win.

Say what you will about Khan, he’s never quit in his fights before. He gets knocked out in the traditional fashion by getting blasted to the point where he’s out of it. In Khan’s last fight, he was knocked cold by former WBC middleweight champion Saul “Canelo” Alvarez in the 6th round in May 2016. Khan hasn’t fought since. However, he does want to face Brook in 2018 after the two of them take an interim tune-up match to get ready.

What’s interesting about Khan taking verbal shots about Brook quitting on a knee is it kind of works against the two of them having a big fight. I mean, if Khan wants his mini-mega fight against Brook to be bigger with the British boxing public, he should be smothering him with compliments by telling the fans that Brook didn’t quit and how he was doing such a swell job against Spence until he took a knee in the 11th and was counted out.

“I’d like to fight him at 147,” said Khan to skysports.com about Brook. “It depends on Kell’s eye, and also the dates — there are a lot of pay-per-view fights on. The fight between me and Kell Brook is a pay-per-view fight. I really believe that fight next summer would make sense.

Gosh, I can’t imagine Brook vs. Khan being on PPV. How do you make it a PPV when both guys are coming off of knockout losses and one of them has been stopped twice in a row? Brook is saying he’s going to move up to 154. It doesn’t make sense for Brook to move up to 154 if he’s going to be coming straight back down to 147 for a fight with Khan. I can already smell an excuse brewing for Brook if things don’t work out well for him in the Khan fight. If Brook doesn’t suffer another broken eye socket, he can blame the defeat to Khan on him being weak from going back down to 147. I’d much rather see Brook and Khan fight at 154. It doesn’t matter to the boxing public at which weight the fight takes place at.

“I’m not saying he quit, because that’s a harsh word. I’m saying he had the fight beaten out of him,” said Bellew about Brook quitting on one knee against Spence. “You know he’s been through a horrendous injury and in the back of his mind, he’s got the Golovkin fight there. He’s probably thinking, ‘I can go blind if I go do this,’ but you’ve got to ex-pulse all those things from your mind. We’re fighters, we’re warriors, we’re freaks, we’re side shows, but we’ve got to fight until we’ve got no fight left,” said Bellew.

Whether boxing fans want to admit it or not, Brook took a bad beating in his loss to Golovkin last September. In addition to the eye injury he suffered in that fight, Brook lost some confidence as well, as he wasn’t the same ultra-confident fighter going into the Spence fight.

Even IBO super middleweight champion Chris Eubank Jr. joined in to give Brook grief about him taking a knee in the 11th round of the Spence fight. Eubank Jr. doesn’t understand how Brook could have quit because of a swollen left eye. Of course, Eubank Jr. didn’t know at the time of his Tweet that Brook has a broken left eye socket.

”How do you just give up your world title with 2 rounds to go because of a swollen eye? Congratulations Errol Spence,” said Chris Eubank Jr. on his social media site.

At this point, it looks like Brook isn’t going to take chances with his eye site after the Golovkin fight. The bad news about Brook’s latest eye problems is it could cause him to worry in his future fights if he starts having eye problems. You hope that Brook wouldn’t be worried in the back of his mind when he’s fighting about whether his eyes will hold up, but I think it’s possible that he’ll have some doubts for a while. Brook needs to get some confidence booster type fights in which it’s mostly one-way traffic with him doing all the punching. That was how things were for most of Brook’s career. It wasn’t until he fought Shawn Porter where he fought someone that was a real threat to him. Carson Jones gave Brook some problems in their first fight in 2012, but that was because Brook gassed out in the second half of the fight and suffered an injured nose.


« Errol Spence Jr. Will Be The Top Welterweight In The World