Gervonta Davis Taunts Ryan Walsh Ahead Of May 20 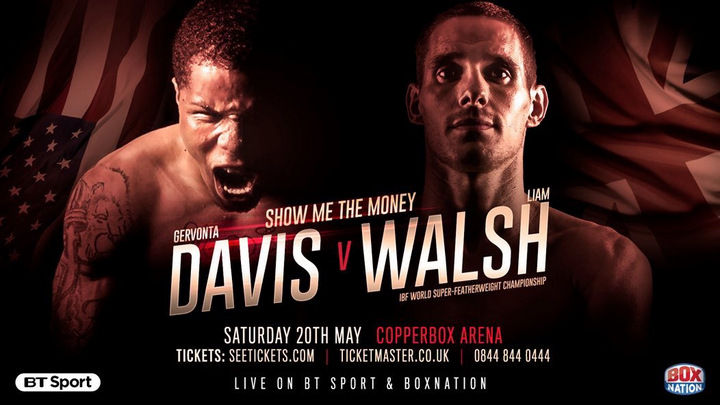 With less than four weeks until the IBF World Super-Featherweight Title fight between Floyd Mayweather protege Gervonta Davis and challenger Liam Walsh, the tension is beginning to build.

On May 20th, ‘Tank’ Davis makes the first defence of his strap at the Copper Box Arena, where the Mayweather hype train will roll into London.

Mandatory challenger Liam Walsh is unbeaten in 21 contests, and will fancy his chances of upsetting the man billed as America’s next big star.

Ryan Walsh, brother of the Cromer hero, responded to a BoxNation tweet on Monday showing the immense speed of Davis, mocking the Baltimore man.

Walsh, who makes the third defence of his British Featherweight strap against Marco McCullough on the undercard, Tweeted: “The #speed he leaves England when my brother exposes him!!”

Davis, replied later that day, stating that he’ll beat Ryan after he becomes the first man to defeat Liam, Tweeting: “You can get in there next after I whip ya brother’s ass. Flat!”

“I’ll give you a comeback whooping if you’re still interested after Liam deals with you,” fired back 30-year-old Walsh, who also labelled the American as “chubby”.

All floor seating at the Copper Box Arena has SOLD OUT.

Remaining tickets priced £40 and £50 are available from www.seetickets.com and www.ticketmaster.co.uk