Haye-Bellew: Lots of hype for a one sided fight 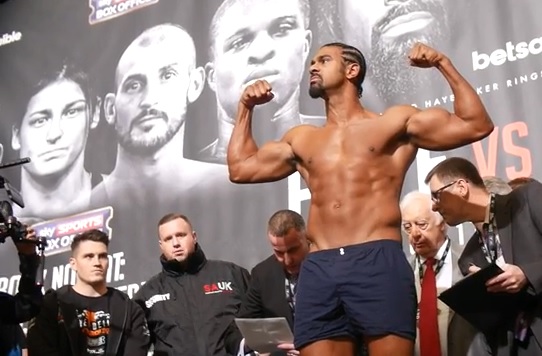 By Gav Duthie: On Saturday evening David Haye 28-2 (26) will yet again make a lot of money for doing very little. In my opinion he faces a badly over-matched Tony Bellew in a low risk high reward fight which will do little for either fighters legacy apart from earning a significant purse. My writing style doesn’t normally lend itself to criticizing fighters but this shouldn’t be viewed as a 50/50 fight.

David Haye should win this within a few rounds and I hope I’m wrong but this is to me is no more than a re run of David Haye v Audley Harrison. This is like Christmas day for David. This fight is pure circus. Bellew’s delusion has started this and Haye will finish it. I’ve never seen so much hype for such a one sided fight.

I don’t want to sound like a boxing snob but most UK fight fans are not obsessed with boxing. This is not a criticism its just the way it is. Boxing is like a guilty pleasure in the UK, a second or third sport after football, cricket, rugby etc. Most fans will watch 10 fights a year, they will gather in someone’s house, a pub, drink spirits and eat pizza and shout for a knockout. They will watch Haye-Bellew for the hype Anthony Joshua-Wladimir Klitschko, Manny Pacquiao-Amir Khan but they won’t care about the return of Lucas Matthysse, that Gavin McDonnell lost his world title shot last weekend its all about the hype and the big nights. Of course I’m stereotyping there are plenty of big fight fans who know their stuff but boxing is like no other where for one night everyone is an expert. This is why they can be tricked into thinking a fight like this is legitimate. They don’t know about the weight classes and the boxing resumes.

Are these antics bad for boxing? Bellew kicks an advertising toblerone, Haye throws a punch, Bellew dubs him Sideshow Bob, Haye’s going to end his career. The true fight fan doesn’t care about all this. They want 50/50 fights, they want to know the technicalities, who has the power? Who can establish their jab? Quicker? Better counter puncher? Etc etc. I don’t care about the hype because I know who is going to win. Boxing banter has been around since the dawn of the sport but it was revolutionised by Muhammad Ali. The biggest fights even today especially in the UK are when the hype and hatred seem to be maxed out. This is the case here, the fact Bellew stands little chance gets lost in the circus.

This is the 4th time Haye has had a big money British Super Fight. Arguably the first was the only one that warranted the media attention it received. This was a unification bout against Enzo Maccarinelli. Although Haye won it easily they were both champions. The second his defence against the somehow ranked Audley Harrison was a joke but the public believed he had a chance. The third a fight against Derek Chisora came out of nowhere when Haye crashed a press conference to beg Vitaly Klitschko for a fight. Chisora is a decent heavyweight but this was his 4th loss in 5 fights. Somehow this fight sold out a stadium because of the pre-match pantomime. This Bellew fight is even more perplexing.

Why Haye took it

Its free money. Haye is a big name in boxing and even with his two easy comeback fights 3/4 governing bodies have him now ranked in the top 5. This is a bonus fight for big money with the PPV. When Haye returned he probably felt the only chance of a big payday would be to face Anthony Joshua, Tyson Fury or a Klitschko rematch. Haye is mandatory for Joseph Parker but why fight him now when you make twice the money for half the job.

Why Bellew took it

It’s been great marketing from Bellew. He has built this fight from nowhere and the money will help set up his family for life. Like Haye, Bellew has some dangerous fights around the corner. His mandatory is Mairis Breidis and that fight would be 50/50. He could also potentially fight Marco Huck who faces Breidis next. Tony might win these but he could also lose and he might as well have a couple of million behind him fighting Haye before risking facing these men.

Hopefully both fighters still have careers after this. Haye can only lose if he truly is finished and hasn’t taken the fight seriously. Eddie Hearn knows deep down that the most likely scenario is if Haye wins he calls out the winner of Joshua-Klitschko and a long as AJ does his job next month this could be one of the biggest fights in UK history. Bellew should face the winner of Breidis v Huck. These are big fights for him although not on the same magnitude as Haye. I would love to see how far Bellew can go in a cruiserweight division stacked with talent.

Chavez Jr: Canelo always fights guys where he has an advantage »