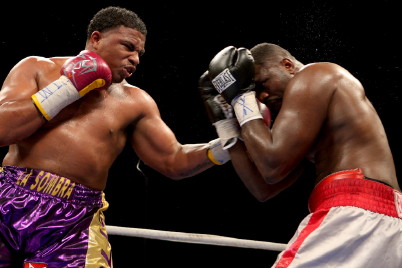 It would confuse some boxing fans if the WBA allowed a third title at heavyweight with Charr and Solis fighting each other for the interim title.

Charr (30-4, 17 KOs) has lost 3 out of his last 7 fights in the last three years of his career, and yet he’s still ranked #7 by the WBA. With that many losses on his record, Charr should probably not be ranked at all in the top 15. When you lose that many fights in such a short period of time, it suggests that you don’t have the talent to be ranked highly.

The WBA has Charr ranked at No.7 for some reason. Charr is ranked above Kubrat Pulev, Dillian Whyte, Jarrell Miller and Christian Hammer in the WBA’s rankings at heavyweight. It’s hard to imagine Charr beating any of those heavyweights.

What’s interesting is Solis’ weight loss. While he was fighting as high as 271 for his second fight against Thompson, he dropped down to 240 for his fight against Dovedan in August of 2016 and 237 for his match against Todorovic. That was the lowest weight of Solis’ career since he turned pro in 2007.

In 2004, Solis won a gold medal in the Olympics representing Cuba. Solis weighed 200lbs back then, and was very fast and very sharp. It’s not likely that Solis will ever get that low again. It’s too bad though. Solis was a very good fighter when he weighed 200.

The Solis vs. Charr fight will be taking place at the Kameha Hotel in Bonn, Germany.