Whyte vs. Chisora rumored to be canceled 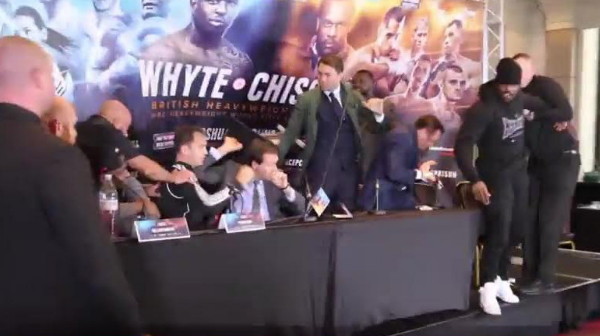 UPDATE: Chisora fined 30k, Chisora given a 2 year suspended sentence – No British title on line but the fight is still on!

By Scott Gilfoid: There are a ton of rumors floating around the internet this morning about the heavyweight clash between Dillian Whyte (19-1, 15 KOs) and Dereck Chisora (26-6, 18 KOs) being canceled for this Saturday night on Sky Box Office PPV at the Manchester, Arena in Manchester, UK.

The Whyte-Chisora fight is supposed to be the co-feature bout on the heavyweight clash between IBF champion Anthony Joshua and Eric Molina. 44-year-old Shannon Briggs is rumored to be the potential replacement for Chisora against Whyte. With the Whyte vs. Chisora fight being a WBC heavyweight eliminator match, Briggs could put himself in position for a title shot against WBC champion Deontay Wilder if he were to beat Whyte. Again, this is all stuff from the rumor mill. Nothing is confirmed.

If the Whyte-Chisora fight is canceled, then that’s going to leave a pretty big hole in the card. There’s really not much to put in the place of that fight that would interest the casual British boxing fans. As of now, this is all just rumors. Nothing has been confirmed. The Whyte vs. Chisora fight is still on.

The rumors are that Chisora has been banned for six months. However, there’s nothing that is confirming those rumors to be true at this time. According to Sky Sports News, the British Boxing Board of Control will be meeting Thursday to make a decision what to do with Chisora over his recent table throwing incident during Wednesday’s press conference with Whyte. Chisora appeared to lose his temper during the press conference after Whyte said something to him.

Chisora then got to his feet and grabbed the table in front of him and tossed it in the direction of Whyte. The decision by the BBB of C will be made today. Whether that means that his fight with Whyte will be canceled is unknown. It’s hard to believe that the BBC of C would look to stop the fight from taking place, because it’s an important part of the Joshua-Molina card. Without that fight, you’ve got pretty much a bunch of mismatches involving rising talents going up against guys that have little chance of winning in my view.

Chisora probably should have played it cool at the press conference with his history of problems. In the past, Chisora was involved with a scuffle with David Haye at the Vitali Klitschko – Chisora post-fight press conference. There was also an incident of Chisora slapping Vitali during the face-off for their weigh-in. And who can forget Chisora spitting water into the face of Wladimir Klitschko before Chisora’s fight against Vitali. There’s a lot more things that Chisora has done before and during fights in the past.

Here are the other fights on Joshua vs. Molina card:

There’s a lot of interesting names on the Joshua-Molina card, but they’ve involved in what appears to be mismatches. The best of the bunch of the super flyweight contenders between IBF champion Luis Conception and Khalid Yafai, but these are really small guys. I don’t think the casual fans that purchase the card are going to have much interest or knowledge about either of these guys. I think it would not be a good fight to put in place of the Whyte vs. Chisora fight if it does get canceled.

Felix Verdejo to fight on February 3 »