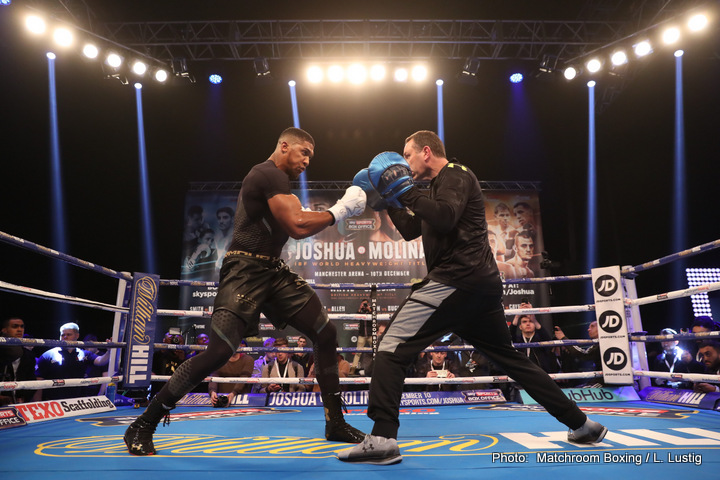 By Scott Gilfoid: IBF heavyweight champion Anthony Joshua figures he’s got maybe five more years left in his boxing career before he hangs up his gloves and retires from the sport. That’s if everything goes as planned with his career. Joshua needs to keep his eye on the task at hand for this Saturday, because he’s facing a real big puncher in Eric Molina (25-3, 19 KOs) at the Manchester Arena in Manchester, England.

It wouldn’t be surprising at all of Joshua gets knocked out in that fight, because Molina is going to be fighting above his head knowing that if he beats AJ, he’ll get a huge money rematch. Molina will be set for life if he beats Joshua. The cash that Molina will get for the rematch will be out of this world good.

Joshua, 27, wants to hang up his gloves by the time he’s 32 if he sticks with his 5-year plan. As far as accomplishments, Joshua isn’t saying what he needs to achieve for him to be ready to retire in five years, but it’s likely that he wants to unify all the belts and still be undefeated. It’s a tough talk for Joshua to do that, because there’s one talent that stands in his way in WBC champion Deontay Wilder.

The 6’7” American stands out among the other top fighters in the heavyweight division. Once you get past Wilder, the talent thins out dramatically and you’re stuck with the likes of Joseph Parker, Luis Ortiz, Andy Ruiz Jr., Kubrat Pulev, Dillian Whyte, Alexander Povetkin, Wladimir Klitschko, Lucas Browne, Bryant Jennings, David Haye, Jarrell Miller, Hughie Fury and Bermane Stiverne.

“I’m 27 now. Maybe I’ll be around for another five years,” Joshua said to the mirror.co.uk. “The legacy I will leave is that I’ve come up the hard way, stayed true to myself. I’m a kid from Finchley, who went down to the gym to get a bit of fitness. I wasn’t chasing money; I was on a self-development course. I can finish in five years, provided everything goes to plan. I could walk away from boxing now. It’s all about being happy – and I’m happy.”

I could understand Joshua blabbering about wanting to retire in five years or so if he’d already taken some scalps and accomplished something in boxing in terms of having beaten some good guys, but he hasn’t done that. The best guys that Joshua has on his resume have come against Charles Martin, Dillian Whyte and Dominic Breazeale. Those are weak heavyweights, and Joshua’s next challenger Molina was knocked out just last year by Deontay.

I see Joshua’s squawking about possibly retiring in five years as a sign that he might not want to stick around long enough for him to get blasted out by the young lions in the sport once he starts to age. We’re about to see Joshua beat 40-year-old Wladimir Klitschko in April of 2017.

Wladimir is an example of a fighter who has stayed too long in the sport in my opinion, and I think he’s going to show why it’s not a good idea to stick around until that age. I think Joshua talking about wanting to retire when he’s 32 as a way of keeping himself from being in the same position. So instead of being picked off by a young lion when he gets old, Joshua will avoid that fate by retiring in the same way that Floyd Mayweather Jr., Rocky Marciano, Carlos Monzon, Joe Calzaghe and Lennox Lewis retired while they were still on top.

Anytime you get a fighter talking about what he’s going to do in his career in five or ten years, I immediately see it as just nonsense talk. Yeah, people in normal life set goals for themselves. For example, if someone wants to become a doctor, they have path to accomplish that task, and they then slowly work towards trying to make that goal a reality. In boxing it’s different, especially when someone wins a world title.

I don’t think Joshua is going to retire in five years. If he’s still a champion and the contenders are all a dreadful bunch, I see Joshua staying on. I think Joshua will continue fighting until some super talented heavyweight emerges that is a real threat to beating him.

With Joshua in his 30s and super rich, I then see him retiring rather than facing the young lion and wind up being torn apart. I think Joshua can picked off anywhere along the lines in the next five years. Even with the careful match-making that Joshua’s promoter Eddie Hearn is doing for him right now, I think he could get knocked out.

Here are the four fights that Joshua could lose in the next two years:

“Joshua is very similar to Froch in his work effort and his desire and dedication for the sport,” said McCracken to skysports.com. “They both want to get to the top and get the rewards for it. Neither of them have any problem with who they fight. I worked with him when he was an elite amateur and we traveled the world together to tournaments – I know him as well as anyone.”

I disagree with McCracken about him saying “Neither of them have any problem with who they fight.” The last time checked, Froch never fought Gennady “GGG” Golovkin when the fight was offered to him. It seems to me that if Froch didn’t have any problems with who he fights, then why didn’t he fight Golovkin? Why didn’t Froch fight a rematch with Andre Ward to avenge his loss to him? Why didn’t Froch fight Andre Dirrell again to clear up the controversy of their fight in 2009? I’m just saying.

As for Joshua, I don’t see him fighting Luis Ortiz, Deontay Wilder, David Haye or Joseph Parker. If Joshua has no problems fighting anybody as McCracken says, then why is he fighting Eric Molina. He’s a fighter who Wilder knocked out just last year. Joshua should be fighting Luis Ortiz right now or Deontay if he has no problems fighting anybody. He should be fighting Haye right now. Haye has made it perfectly clear that he wants to fight Joshua right now. Why isn’t Joshua doing that?

Whyte vs. Chisora rumored to be canceled »