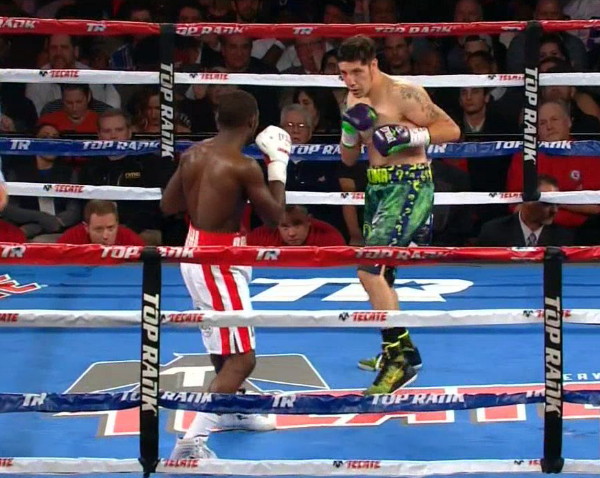 By Chris Williams: Unbeaten WBA/WBO light welterweight champion Terence “Bud” Crawford (30-0, 21 KOs) held onto his titles in stopping #1 WBA, #2 WBC, #2 WBO challenger John Molina Jr. (29-7, 23 KOs) in the 8th round on Saturday night in front of a large crowd of Crawford fans at the CenturyLink Arena in Omaha, Nebraska. Crawford ran around the ring most of the fight, jabbing, holding, jabbing and pot shotting the very slow 33-year-old Molina Jr.

In the 8th, Crawford suddenly stopped moving and threw a flurry of shots that hurt Molina Jr. Crawford then finished Molina off with three right hands to the head and right to the body. The referee Mark Nelson then halted the fight. The official time of the stoppage was at 2:32 of the 8th.

Crawford said afterwards that he feels he should be 2016 ‘Fighter of the Year’ for his wins over Molina Jr., Hank Lundy and Viktor Postol.

“I feel like I got it,” said Crawford about the ‘Fighter of the Year’ award. “I just have to wait until the results come in.”

I don’t think Crawford is going to win the ‘Fighter of the Year’ for 2016 off this performance. It was the wrong opponent for Crawford to win that award, and he didn’t make it very exciting. Fellow Top Rank fighter Vasyl Lomachenko was a lot more interesting to watch in his wins over Roman Martinez and Nicholas Walters in my view. Both of those guys take a back seat to middleweight champion Gennady “GGG” Golovkin for his wins over Kell Brook and Dominic Wade in 2016.

In terms of pure excitement, Golovkin comes out ahead of Crawford and Lomachenko. At least with Golovkin, he was coming forward in those two fights. Lomachenko danced around at times in his fights. We already saw how Crawford fought tonight. He was off to the races from round one, making the fight painfully boring for me to watch. This was not a Mayweather-esque performance from Crawford no matter how much HBO’s talking heads might want to paint the performance. Mayweather would stand in the pocket and fight. Crawford was just moving around and doing an awful lot of holding.

When asked if he plans on moving up to welterweight, Crawford said, “I’m the undisputed light welterweight champion in the division.”

In other words, Crawford doesn’t appear to be interested in moving up to 147. With the way that Crawford fought tonight, I don’t think it would be a good idea for him to move up to welterweight. Crawford looked too weak and unable to hold his ground. When Crawford did stand and fight early, he was nailed by a big shot from Molina in the 3rd round. After Crawford got hit by that right, he was on his bike, moving, jabbing, holding and jabbing. It was very hard to watch because it was just pure movement. When you’ve seen guys like Floyd Mayweather Jr. in the past use movement, he would only do it at times, and not focus on it the entire time. But with Crawford, he was on his bike continuously and it was just so boring to watch.

Based off this performance, I don’t think Crawford is going to get the 2016 ‘Fighter of the Year’ or a fight against Manny Pacquiao in 2017. If Crawford wanted to get the fight against Pacquiao, then best thing for him to have done would have been to stand his ground and fight Molina Jr. Adrien Broner didn’t run around the ring when he shut Molina Jr. out last year in beating him by a 12 round unanimous decision.