Haye to be ringside for Joshua vs. Molina 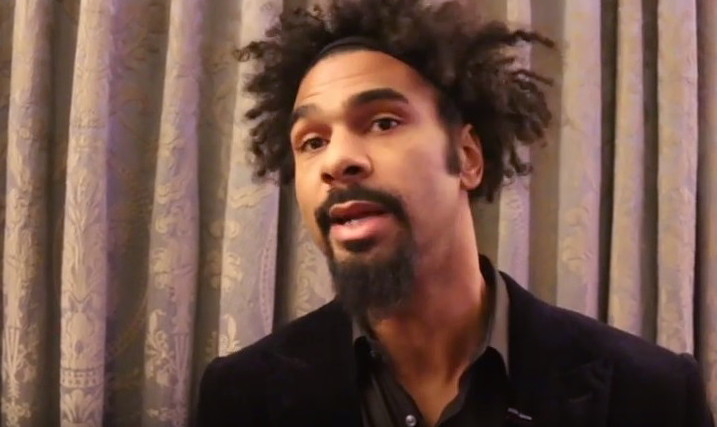 By Scott Gilfoid: David Haye will be at ringside this Saturday night to scout out IBF heavyweight champion Anthony Joshua (17-0, 17 KOs) in his title defense against American KO artist Eric Molina (25-3, 19 KOs) at the Manchester Arena in Manchester, UK. Haye is hoping to get a fight against Joshua in the near future, and he wants to pick up some of his vulnerabilities before he faces him.

I hate to say it, but Haye doesn’t need to see Joshua live at ringside to see all the weak spots in his armor. The flaws are there to be seen just by looking at some of the video of Joshua’s recent fights. He’s pretty much the same fighter that won a controversial gold medal in the 2012 Olympics.

If anything, I think Joshua is not as good as he was back then, because he’s put on a bunch of useless muscle that has slowed him down. Joshua was never quick to begin with, but all the muscle weight he’s put on has turned him into a bulky body-builder type of fighter.

It’s interesting that Haye (28-2, 26 KOs) is looking past his fight against cruiserweight Tony Bellew (28-2, 18 KOs) on March 4 on Sky Box Office pay-per-view at the O2 Arena in London, UK. With all the squawking that Bellew and his promoter Eddie Hearn have been doing about the fight, you’d think that Haye would be doomed. Haye obviously realizes that the Bellew fight is a sick mismatch and not going to be a competitive fight in the least.

I can’t blame Haye for overlooking Bellew, because that’s one of those fights that Haye can win simply by showing up and totally distracted by other things. Bellew is just WAY out of his class in fighting Haye. I’d like to have seen Bellew actually fight some of the top cruiserweight contenders before moving up to heavyweight for the Haye fight.

I would have like to have seen Bellew fight Murat Gassiev, Marco Huck and Oleksandr Usyk all in a row before him fighting Haye. Is that too much to ask? If not that, then Bellew should have had to fight Luis Ortiz or Dillian Whyte before fighting Haye. It just looks bad the way Bellew is jumping to the head of the line to fight a top contender like Haye without earning the fight.

Haye said this to skysports.com about him wanting to fight Joshua:

“If it’s available, I’ll take it, but there is one thing me wanting it in my schedule and another thing Eddie Hearn and Team Joshua wanting that fight,” Haye said. “It will be by far the biggest, the most dangerous fight he’s been in. There is no fight that comes close to his preparation for me, the angles that I come at, the speed, the power.

Joshua isn’t taking any chances before his big money fight against Wladimir Klitschko in the first quarter of 2017. If Joshua beats Molina and Wladimir, I suspect he’ll look to fight another fringe contender to pad his record. Yeah, I think it’ll be an American heavyweight contender in order to keep Showtime Boxing happy. Joshua is under contract with Showtime to have his fights shown in the U.S.

Joshua has already fought one American in Dominic Breazeale since signing with Showtime. Molina will be the second American. For Joshua’s next fight after the Klitschko fight, I see him fighting one of these American heavyweights: Jarrell Miller, Bryant Jennings or Shannon Briggs. There’s not exactly a lot to choose from. The real talent is WBC heavyweight champion Deontay Wilder, but I think Joshua will fight him in the tail end of 2017, because taking the fight mid-year will be too soon.

“I love those types of fights and I would love to show the young buck that the old lion has still got the bite,” said Haye.

Haye is probably not going to get the fight against Joshua until 2018 at the earliest. I see Joshua being booked up with other fights in 2017. Haye can definitely help himself if he takes on some good heavyweights for a change. Haye’s two mismatches since he returned from a four-year absence from boxing were good enough opponents to interest the fans of the sport.

Likewise, Haye’s fight against Bellew is pretty much the same as his two comeback fights against Arnold Gjergjai and Mark De Mori. I think those guys are maybe a little bit better than Bellew. But in terms of attention from the sport, Haye isn’t going to get much credit for beating the brakes off of the 33-year-old Bellew. Why would he? Bellew hasn’t beaten anyone good in the cruiserweight division for him to be a big name.

I could understand a fight between Haye and Bellew making news if Bellew had beaten the likes of Oleksandr Usyk, Murat Gassiev, Mairis Briedis, Dmitry Kudryashov, Marco Huck and Beibut Shumenov. Bellew isn’t fighting those kinds of guys. Bellew is facing the weaker fighters like BJ Flores and Ilunga Makabu, and then bragging about how he sees himself as the best fighter in the cruiserweight division. It’s all quite sad.

Haye is going to be a REAL problem for Joshua when they do eventually face each other. I get the impression that Joshua and Hearn are waiting Haye out until he’s old, toothless and harmless. In other words, they’re waiting until Haye is an old toothless lion that they can beat and then add his scalp to their resume. The casual boxing fans won’t have a clue that Haye was an old man by the time that Joshua fought him. They’ll just see that Joshua beat Haye and figure that Haye was still in his prime.


« Eric Molina: I know I can hurt Anthony Joshua