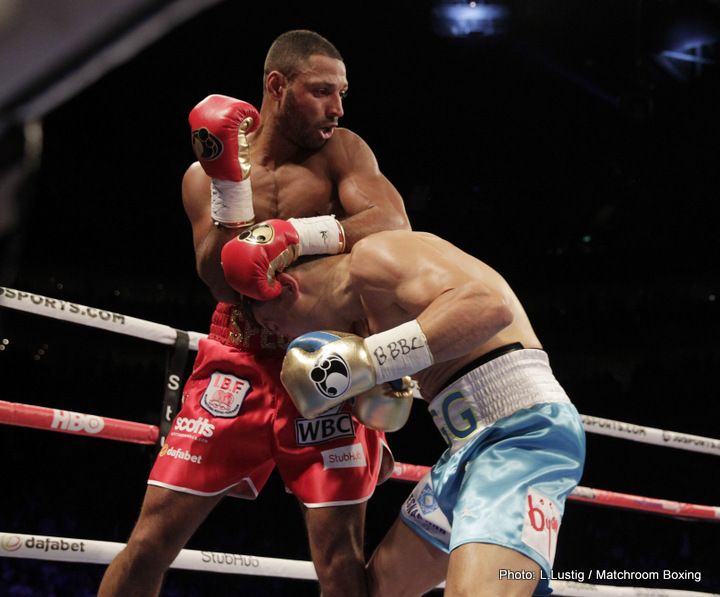 By Scott Gilfoid: IBF welterweight champion Kell “Special K” Brook (36-1, 25 KOs) left this cryptic message on his Twitter on Monday, saying, “There’s no truth.” While some boxing fans have been quick to speculate that Brook is commenting on the rumors of him leaving Matchroom Sport for another promotional company, Gilfoid sees it as way for Brook to take a shot at his talented mandatory challenger Errol “The Truth” Spence Jr. (21-0, 18 KOs), who he is supposed to be fighting next.

It’s pretty obvious that Brook, 30, is trying to say that the 26-year-old Spence is no threat to him. But if that were the case, then why is Brook trying so hard to steer around Spence? Brook and his promoter Eddie Hearn keep yapping about wanting to fight Manny Pacquiao, Amir Khan or the winner of the Danny Garcia vs. Keith Thurman fight.

I think they’re sounding increasingly desperate as the time narrows to where Brook will have to make the decision of either defending his IBF 147lb belt against Spence or vacating it to go in another direction.

Look at what Brook said yesterday to Fighthype.com about Spence:

What does that tell you? In one breath Brook is blabbering about how Spence would be a “fantastic fight”, and then in the next breath, he says he wants the Thurman-Garcia winner or Manny Pacquiao. That wasn’t all. Brook also said he wants the Amir Khan fight. I get the sense that Brook would either give up his IBF belt in a second if he could get one of those guys to fight him or he would have his promoter Eddie Hearn talk to the IBF to have them let him steer around the Spence fight so that he could take another fight before having to make a decision on what to do with Spence. I don’t see Brook ever fighting Spence, to be honest.

I think Brook is just using his IBF title right now as bait to get Pacquiao, Thurman, Garcia or Amir Khan to fight him. If Brook gets one of those fights, then I see him giving up his IBF title. Heck, even if Brook doesn’t get any of those fighters to face him, I still see him vacating his title.

In the same interview, Brook said this about his desire to fight Khan:

It would be sad if Brook is allowed to steer around Spence. What the boxing world doesn’t need is for Brook to be sitting on his IBF title like a mother hen, choosing to fight whoever he pleases rather than his mandatory challengers. I know Brook fought his mandatory challengers in the past, but that was when it was Kevin Bizier and Jo Jo Dan. Those were the equivalent of voluntary defenses against bottom 15 type fighters in my view. I still don’t have idea why on earth the IBF ranked Bizier and Jo Jo Dan at No.1. To me, they’re not even bottom 15 type talents. I see them as 2nd tier guys all the way.

Well, if Brook would just face his mandatory challenger in Errol “The Truth” Spence Jr., then he could have Hearn try and set him up with a fight against Khan, Pacquiao or the Thurman vs. Garcia winner. Believe me, it would be huge news if Brook beats Spence in 2017, because it would give him a nice name to add to his resume. Further, the boxing world would finally start taking notice of Brook in the U.S.

They wouldn’t just see him as the guy that clinched all night long in beating Shawn Porter two years ago in a terrible to watch fight for the IBF title in 2014. The fans wouldn’t see Brook as the guy that ran from middleweight champion Gennady “GGG” Golovkin for 5 rounds before his trainer Dominic Ingle threw in the towel just when he was getting hammered by the Kazakhstan fighter. The outcome of that fight looked bad with Brook getting saved by his trainer Ingle. Boxing fans want to see fighters go out on their shield by fighting to the end. We didn’t see that with Brook. He ran for four rounds, and then could no longer run in the 5th, and he got worked over by Golovkin until Ingle threw in the towel. Superstar Floyd Mayweather Jr. said he thought the Golovkin-Brook fight should have gone on longer. I totally agree with Mayweather. The fight should have gone on until the bitter end rather than having Ingle throw the white towel of surrender into the ring at the first hint of trouble for Brook. That looked like a weak move. Some boxing fans think that was the plan all along. In other words, Brook would run around the ring in avoiding Golovkin, hitting him with pot shots, holding and basically spoiling. Once Brook could no longer run and was taking shots, Ingle would throw in the towel in order to save his fighter from taking punishment and to save him from the indignity of being blasted out in front of his many fans. That’s the way some boxing fans see it. The way I see it was that Brook didn’t put up much of a fight, and the ending was predictable once he got caught.

Spence would do the same thing to Brook that Golovkin did in my view. Spence is a HUGE puncher, and superb pressure fighter. But more importantly, Spence is the best body puncher in the 147lb division, and might even be the best in the 154lb division as well. Brook seems to have problems with taking body shots from what I can see. In the final sequence of Brook’s fight against Golovkin in round 5, Brook was trying to run, but got hit with a right to the body. That shot caused Brook to stop defending himself completely. Brook dropped his gloves to his midsection and kept them there as Golovkin hammered him with head shots one after another. The fact that Brook didn’t even try to lift his gloves from his midsection suggested me that he was not in any position to take another body shot from Golovkin at that point in the fight. Brook then used the ropes as a walking cane and moved along them until he was trapped in a ‘last stand’ position on the opposite side of the ring. At that point, Golovkin started to hammer Brook with shot after shot to the head and body. Brook got out of the way of some of the shots, but not all of them. Once Golovkin started to punch downward onto Brook’s head, he was hitting him at will. At that point, the white towel was thrown into the ring by Ingle to have the slaughter stopped. Once the referee stopped the contest, Brook staggered to his corner like a drunk.

Brook was clearly hurt and quite lucky that Ingle had stopped the fight. If he hadn’t stopped the fight then, I have no doubts that Brook would have slid down onto the canvas from one of the many power shots that Golovkin was nailing him with. Golovkin was no longer missing anything in the final seconds. He had figured out that Brook was going to keep ducking his head, so he started to punch downward into the top of his head, which had to really hurt Brook. Ingle tossed in the towel and the rest is history.


« Haye to be ringside for Joshua vs. Molina