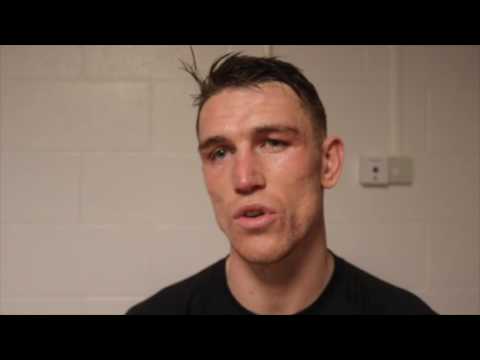 By Scott Gilfoid: Unbeaten #1 WBC 168lb contender Callum Smith (22-0, 17 KOs) successfully defended his British super middleweight title on Saturday night in stopping a badly over-matched Luke Blackledge (22-3-2, 7 KOs) in the 10th round at the Manchester Arena in Manchester, England. The sudden ending to the fight had the boxing fans in the arena quiet and stunned.

Smith, 26, knocked Blackledge completely out in the 10th round with a left hook to the head. The medical staff had to be brought into the ring to check on the 26-year-old Blackledge. He was able to get up and leave the ring on his own two feet. The official time of the stoppage was at 2:23 of the 10th. Smith also knocked Blackledge down in rounds 3 and 8 with big power shots.

Blackledge had a point deducted in the 7th for excessive holding by referee Steve Gray.

The fight probably should have been halted by the 6th round, because Blacklege was just soaking up punishment and doing next to nothing in terms of his offense. Blackledge had no power to speak of, and this enabled the stork-like Smith to come forward and unload on hmi without worry of anything being thrown back at him. I don’t know why Blackledge’s corner didn’t pull him out earlier in the fight, because there was no reason to leave him out there until the 10th round.

In round 3, Smith dropped Blackledge with a right to the head. The shot was a good one, but Blackledge wasn’t hurt. It was more of a case of him being blinded by a left hand from Smith that came right before the right that put him down.

In the 5th, Smith showed his frustration at not being able to score a fast knockout, as he hit Blackedge with a right hand rabbit punch to the back of the head followed by a right to the back. Blackledge had gotten turned around, and Smith chose to take advantage of it by hitting him with a couple of cheap shots. It didn’t look good at all. It just made Smith appear to have lost control.

In the 8th, Smith knocked Blackledge down with a flurry of shots. After Blackledge got back to his feet, he took enormous punishment from Smith, and it looked for a second like the referee was going to halt the fight. However, Blacklege was able to come on in the final seconds to land a few punches to the head of Smith. This probably saved him from having the fight stopped. At the time, the crowd was cheering for heavyweight David Haye, who was seen walking around the arena. Blackledge responded to the cheering by going after Smith. It was an interesting change of pace for the fight.

This was not an overly impressive performance from the 6’3″ Smith, because the fight was a total mismatch from the moment the contract was signed. I’m not sure why Smith was fighting someone at the level of Blackledge, because it was a match that arguably should have never been made. Never the less, Blackledge made Smith look bad by lasting until the 10th round the way he did. Blackledge was able to land a lot of shots, and he showed the blueprint in how to give Smith problems by tying him up frequently. The way Smith looked in this fight, I don’t see him beating IBF champion James DeGale or WBC champ Badou Jack. Smith is too easy to hit, and he’s not able to work consistently enough for him to be able to beat the top guys in my view.

I think Smith has got a lot of flaws that other top super middleweights will take advantage. He’s too hittable, and he’s vulnerable due to his inability to fight hard for the full three minutes of every round. He’s a decent contender, but I don’t give him any chance of beating any of the champions right now. Smith needs more seasoning.