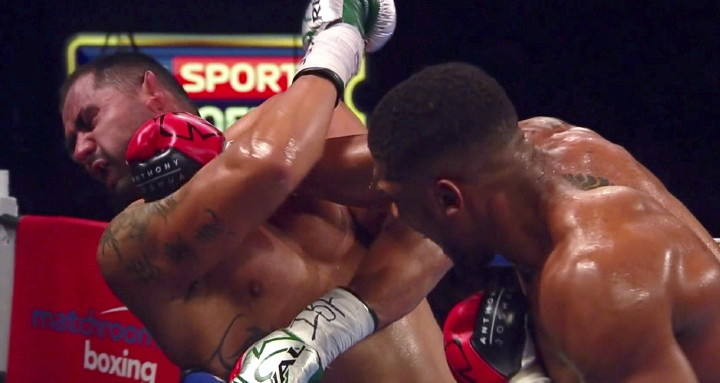 By Scott Gilfoid: IBF heavyweight champion Anthony Joshua (18-0, 18 KOs) made easy work of #8 IBF challenger Eric Molina (25-4, 19 KOs) in stopping the reluctant fighter in the 3rd round on Saturday night at the Manchester Arena in Manchester, England.

Molina, 34, was absolutely not interested in fighting tonight, as he did zero in terms of throwing punches until being stopped in the 3rd round. Joshua dropped the 6’4″ Molina with a right hand to the head in his corner. Molina made it back up at the count of 8. Joshua then finished Molina off with a three-punch combination that resulted in the referee Steve Gray halting the fight at 2:02 of the 3rd round.

The way that Molina went down from the knockdown in the 3rd, he looked like he had no interest in getting up at all. He just saw there on his backside in the corner after getting dropped. Frankly, I was surprised that Molina even bothered to get back up, because he looked totally disengaged mentally, as if he didn’t want to be there tonight. Heck, Molina had the same look on his face when he entered the ring at the start of the fight. I saw no fire in Molina’s eyes tonight. He just looked totally scared.

“Disaster avoided tonight,” Joshua said. “He started off teeing off with some haymakers early on. There are not too many tactics he can do. It’s hard for him to come in and fight when you aren’t giving him any options. Someone who is boxing with you can give you options, but someone who is boxing on his back feet cannot.”

Molina did little more then cover up and hold the entire brief three rounds of the fight. It was pretty sad to watch. It’s surprising that boxing fans didn’t boo Molina out of the ring by round three, because he was putting in no effort at all. Referee Steve Gray warned Molina in the third that he needed to stop holding, but he should have warned him to stop being a punching bag and throw some punches because he was doing nothing in there.

The fight was won the moment that Joshua signed the contract for the mismatch, as Molina never stood a chance coming in the door. I still don’t know why Joshua’s promoter Eddie Hearn selected Molina as Joshua’s opponent, because the guy had been knocked out just last year by WBC heavyweight champion Deontay Wilder. Molina had done nothing to earn a second shot at a title unless you count beating Rodricka Ray and 40-year-old Tomaasz Adamek as earning a title. Molina fought the same way against Adamek as he did against Joshua.

Molina looked like a timid rabbit against Adamek until the 10th round, which is when he finally started throwing punches. I knew that if Molina did the same thing against Joshua, he would be knocked out early. I was hoping that Molina would let his hands go early in this fight, because I would be an insane move to just cover up. Unfortunately, Molina played it the same way as he did against Adamek, and it cost him the fight. Oh well, you give credit to Eddie Hearn for picking out a soft job for Joshua to pad his record with. This is yet another soft job for Joshua.

I think it’s likely that Molina has seen his last time as a world title challenger. Molina was picked out by Wilder as a voluntary challenger and then Joshua. After tonight, I can’t see Molina getting picked out by another champion in the future for a title shot. I don’t think there would be any interest from boxing fans in seeing another champion like newly crowned WBO heavyweight champion Joseph Parker fighting Molina too unless he makes major improvements in his game and gets some solid wins. I don’t see that happening. I think Molina is the finished product. If anything, he’ll be going downhill in the future rather than uphill. 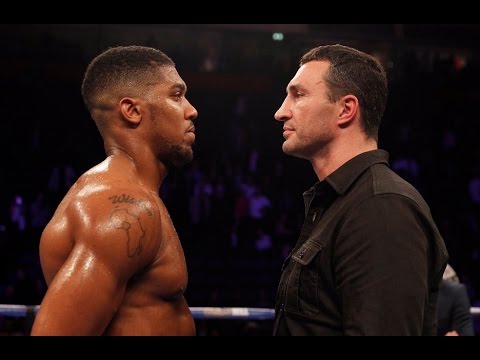 With the victory, Joshua will now be facing 41-year-old Wladimir Klitschko on April 29 at Wembley Stadium in London, England. Wladimir hasn’t fought in almost two years since his loss to Tyson Fury. It should be another nice mismatch for Joshua. Wladimir was a good fighter in his prime, but he’s no longer the fighter that he once was and he hasn’t fought in ages. I think the Joshua-Klitschko fight will be a big deal, but the match is at least two years too late. Wladimir has looked dreadful in his last two fights against Fury and Bryant Jennings. If you saw both of those fights, you’ll have noticed that Wladimir can no longer land a right hand due to his timing and accuracy being gone. Wladimir’s only weapon at this point in his career is his jab, and even that wasn’t landing in his last fight against Fury. I think Joshua is going to have little problems stopping Wladimir on April 29 if he’s unable or unwilling to throw punches.

Wladimir can still move well at this point in his career, but he’s not going to beat Joshua on movement. What’s hard to understand is why Wladimir is choosing not to take a tune-up for the Joshua fight. Logically, it makes sense for a fighter that has been out of the ring for close to two years to take a tune-up, doesn’t it? The way that Wladimir is electing to take the fight with Joshua without a tune-up tells me that the fight is little more than a cash out fight for Wladimir. In other words, just a payday fight for him to retire on. That’s the way I see it. I don’t see it as a fight where Wladimir is going to be going into it with confidence that he’s going to win. How can he? He lost his last fight to Fury in 2015 in one of the most boring heavyweight title fights I’ve ever seen, and he’ll have been out of the ring for 1 1/2 years by the time he faces Joshua.

Hopefully, Eddie Hearn starts matching Joshua against better fighters after he wipes out Wladimir in April. Thus far, Joshua has twice defended his IBF title since winning it against Charles Martin. Joshua’s first defense came against #13 IBF fringe contender Dominic Breazeale, who did little more than cover up all night until getting stopped. Instead of finding a more talented challenger for Joshua’s second defense, he was matched against Molina. If all Joshua is going to do is fight over-matched fringe contenders for his voluntary defenses, I can’t see him having much of a legacy. I’m just saying. Joshua should be fighting guys like Jarrell Miller, Luis Ortiz, Kubrat Pulev, Deontay Wilder, Alexander Povetkin and Bermane Stiverne instead of the punching bags that Hearn is putting him in with. 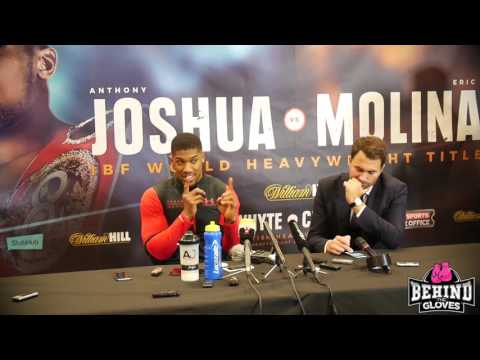 It’ll be interesting to know how many PPV buys the Joshua vs. Molina fight will be bringing in on Sky Box Office PPV for tonight’s slaughter. It was a bad fight to watch if you’re interested in seeing competitive fights. I’m still trying to figure out WHY Hearn picked Molina out for Joshua to fight. Did he think Molina was a big star in the U.S? I just do not understand the move. Out of all the heavyweight contenders that Hearn could choose for Joshua, why choose Molina? Was it because he had fought Deontay Wilder last year? Molina was knocked out in that fight after getting dropped three times by Wilder. Why pick a guy that was knocked out recently for Joshua to fight? It’s confusing to me, because it just appears that Hearn is matching Joshua against guys that have no chance of beating him instead of fighters that at least have a slight chance of winning. 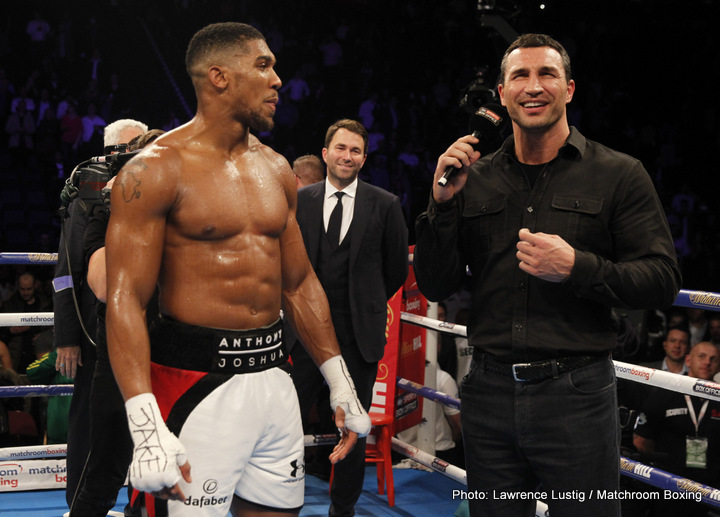