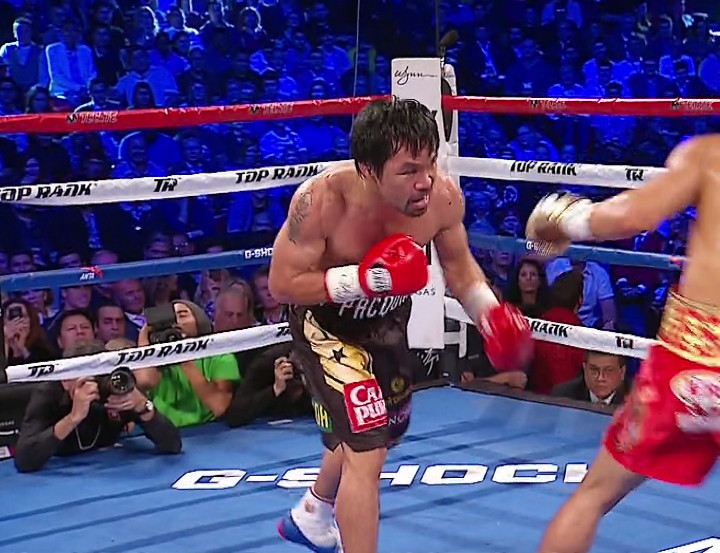 By Jim Dower: Manny Pacquiao (59-6-2, 38 KOs) dominated the younger and slower WBO welterweight champion Jessie Vargas (27-2, 10 KOs) to defeat him by a 12 round unanimous decision on Saturday night to capture his WBO 147lb title at the Thomas & Mack Center in Las Vegas, Nevada. Vargas was dropped by a left hand from Pacquiao in the 2nd round. Vargas appeared to be dropped twice more in the fight, but the referee ruled them as slips.

The judges scored the fight 114-113, 118-109 and 118-109. It was hard to give Vargas any round after the 6th, as he stopped being aggressive, and was taking straight left hands and jabs from Pacquiao. Vargas’ offense consisted of him throwing right hands to try and catch Pacquiao coming in. The problem is Vargas wasn’t able to connect with a high percentage of his shots. He also seemed to lack punching power despite his bold talk ahead of time about his power.

In round eight, Vargas was cut over his right eye from a punch from Pacquiao. The cut bled the remainder of the fight, but it wasn’t the reason for Vargas losing. He lost the fight because he wasn’t pressing forward trying to attack Pacquiao. He was fighting too defensively for a fighter facing a superstar like Pacquiao.

Vargas had talked all week long about this fight creating a legacy for him. Unfortunately, Vargas failed to show that he was good enough to beat a fighter 10 years old than him in 37-year-old Pacquiao. This wasn’t even Pacquiao at his best. It was clear immediately that Pacquiao wasn’t the same fighter that beat Miguel Cotto seven years ago in 2009. That version of Pacquiao would have destroyed Vargas and knocked him out. The 37-year-old Pacquiao we saw in the ring tonight was still good enough to dominate a limited fighter in Vargas. Pacquiao showed that Vargas was little more than a paper champion.

Vargas was at his best in the first four rounds when Pacquiao was fighting cautiously, and not attacking him. However, once Pacquiao started to go on the attack following the 6th, the fight became one-sided with Pacquiao dominating the action.

The win for Pacquiao gave him back his old WBO title, which he lost to Floyd Mayweather Jr. last year in May 2015. Mayweather gave up the title when he failed to pay the sanctioning fee for it. Tim Bradley then picked up the WBO title and held it briefly before vacating it. The belt was then picked up by Vargas last May after stopping Sadam Ali by a 9th round knockout. What’s interesting is that the WBO title has remained with Top Rank fighters since Mayweather gave up the title. That’s got to be some kind of record to have the WBO title going from one Top Rank fighter after another. What it shows is that Top Rank is matching their own fighters for the belt, and that’s why it’s staying with that promotional company.