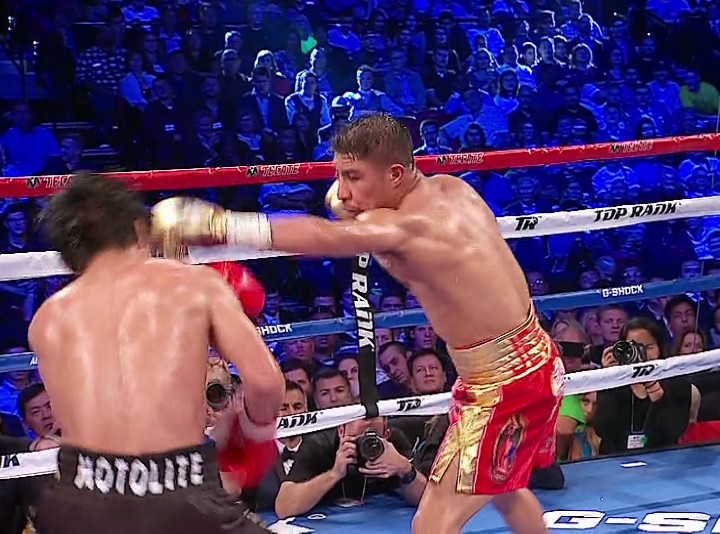 By Chris Williams: 37-year-old Manny Pacquiao was very economical with his punches tonight in winning a less than impressive 12 round unanimous decision victory over World Boxing Organization welterweight champion Jessie Vargas on Top Rank pay-per-view. Pacquiao fought like he was afraid to get clipped by Vargas. Many of the rounds were very close, and the only reason why were close was because looked timid. The fight took place at the Thomas and Mack Center in Las Vegas, Nevada. It wasn’t a sellout, which doesn’t surprise me. It wasn’t a big enough fight.

There was a flash knockdown that Pacquiao scored in the 2nd round. Vargas wasn’t hurt. It was more of a case of Vargas being off balance after throwing a shot of his own. Pacquiao hit him with a weak left hand that put him down.

Pacquiao won the fight by the judges scores of 114-113, 118-109 and 118-109. I agree with the first judge that had it close at 114-113. I had Pacquiao just barely winning the fight. Pacquiao was getting hit by Vargas right hands the entire fight, and much of the reason for that was because he was standing on the outside waiting for the perfect moment to rush forward to throw a punch. You can’t fight like that against the 27-year-old Vargas, because he likes it when his opponents fight at a slow pace. Look at how Tim Bradley dominated Vargas in their fight last year. Bradley did it by attacking Vargas nonstop for 12 rounds. Bradley did a much better job beating Vargas than Pacquiao, and the reason for that was because he was braver. Pacquiao didn’t show the bravery that he needed for hm to win the fight with ease. The only thing I can think is that Pacquiao is still haunted by his 6th round knockout loss to Juan Manuel Marquez in 2012. I think that knockout left an impression on Pacquiao, making it impossible for hm to attack like he used to.

Vargas landed 104 punches in the fight, which is obviously a low number. The reason why Vargas landed so few shots is because he was standing on the outside only throwing long right hands, which were easily avoided by Pacquiao in many cases. If Vargas had at least attacked Pacquiao the way that Marquez did in their four fights, it would have been an easy fight for him.

Pacquiao picked up his 59th win of his career, and his record is now 59-6-2 with 38 knockouts. Vargas (27-2, 10 KOs) showed gritty determination by standing in the pocket and not running from Pacquiao like we’d seen from other fighters over the years. The good news for Vargas was he was willing to stay in front of the Filipino star. What was bad was Vargas wasn’t throwing punches half the fight. He was giving Pacquiao WAY too much respect. If it had been me in the ring with Pacquiao, they would have had to pull me off of him, because I would have been throwing shots 24/7. That’s the way to beat Pacquiao. Juan Manuel Marquez and Floyd Mayweather created the blueprint in how to beat Pacquiao, and that’s by staying busy.