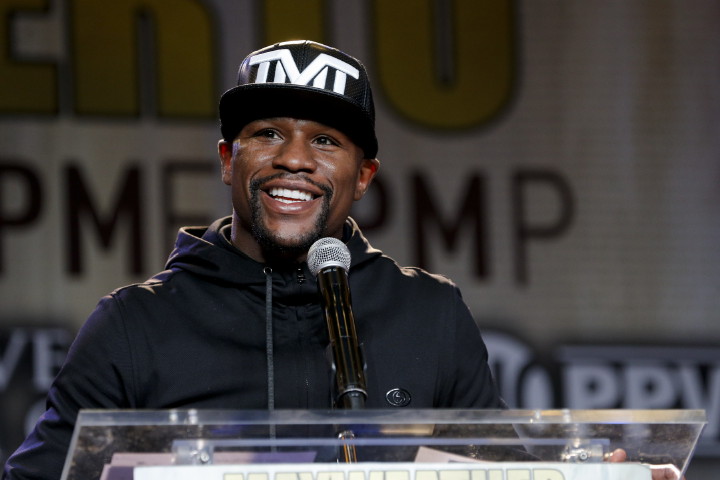 By Chris Williams: Floyd Mayweather Jr. isn’t saying whether he thinks Manny Pacquiao will lose tonight in his fight against WBO welterweight champion Jessie Vargas, but he does think that he’ll get a pass by the boxing fans if that does happen. Mayweather sees fans blaming a Pacquiao loss on his advanced age rather than on him losing to a guy that was simply better than him.

Pacquiao is only 37, so there shouldn’t be any reason to blame a loss on him being old. The 39-year-old Mayweather thinks that if it were him losing the fight, then the boxing fans would say it was because he was never what people thought he was.

In other words, Mayweather wouldn’t get the free pass that Pacquiao will get tonight if the 27-year-old Vargas sends him down to defeat in their fight on Top Rank pay-per-view from the Thomas & Mack Center in Las Vegas, Nevada.

Mayweather said this to Fighthype.com:

“If Pacquiao happens to lose the fight, they’re going to say age played a factor,” said Mayweather. “If it was me and I lost at his age, they’d been like, ‘Yo, I told you Mayweather wasn’t what they said he was,” Mayweather said.

I have to agree with Mayweather. It would be just as he says. If Pacquiao loses to the 5’10” Vargas tonight, the boxing fans that see the fight, which there not be that many, won’t downgrade him for losing to Vargas. They’ll assume that it’s because of Pacquiao being almost 38. They won’t give Vargas the credit that he deserves for beating Pacquiao. That’s sad, because Vargas won’t get the bounce from beating the Filipino star that he rates. A win for Vargas should show the boxing world that he’s one of the best fighters in the sport. Instead, a victory by Vargas will have fans saying, ‘The only reason Vargas won is because Pacquiao got old.’ That isn’t right, because we saw how good Pacquiao still is in his recent win over Tim Bradley.

Pacquiao looked just as good in that fight as he was when he beat the brakes off Oscar De La Hoya in 2008. There was no difference at all. Vargas should get credit for whipping Pacquiao, but he probably won’t. If it were Mayweather losing to Vargas, many boxing fans would look at the fight and assume that Floyd was never that good to begin with. They would assume that Mayweather would have been beaten by Vargas no matter what age they fought. They wouldn’t look at Mayweather and realize that he’s older now, and not the fighter he was in his 20s.

It doesn’t matter though, because Mayweather would not lose to Vargas. It would be an easy fight for Mayweather. That’s not because I don’t think Vargas is a good fighter. I think Vargas is a heck of a fighter, and I think he’s going to beat Pacquiao by a knockout tonight. That’s my prediction. Vargas is going to catch Pacquiao with a right hand and knock him clean out by the 7th or 8th rounds. Before then, Vargas will toy with Pacquiao by punishing him with right hands and left hooks each time he tries to get near him to land a shot.

Mayweather think Pacquiao doesn’t have a lot of options for fights being with Top Rank, because they keep sticking him in rematches with different fighters in the Top Rank stable. For example, Pacquiao has fought Juan Manuel Marquez 4 times, Tim Bradley 3 times, Erik Morales 3 times, and Marco Antonio Barrera 2 times.

You can argue that with the way that Top Rank promoter Bob Arum likes to match his fighters, he keeps them fighting each other rather than matching them against a lot of top fighters outside of his Top Rank stable. While it’s nice to have rivalries, it’s not good if Pacquiao isn’t being matched against great fighters on frequent basis outside of Top Rank.

“You look at Pacquiao; they don’t have that many options,” said Mayweather about Top Rank. “Pacquiao fights these guys 3 and 4 times. I think he might have fought Marquez, what, 4 times. He fought Marquez 4 times, fought Erik Morales 3 times, Timothy Bradley 3 times. And it’s a few other fighters that he fought more than just once,” Mayweather remarked during a recent conversation with FightHype.com. “So we talking about something like 5 guys, something like that, 20 times. 20 of his fights was just by 5 guys or 4 guys; I don’t really know. Real crazy.”

I totally agree with Floyd. Pacquiao has fought a whole bunch of fights against like four guys during his career rather than him being branched out into fights against other guys. Arum should have spread Pacquiao around a long time ago and matched him against Tszyu, Williams, Canelo, Golovkin, Charlo brothers, Brook, Khan, Danny Garcia and Porter. There’s no reason those fights shouldn’t have happened. Matching Pacquiao against Clottey, Rios and Algieri was not a good move by Arum. You can only imagine the PPV money that was lost making those fights compared to the money that could have been made if Pacquiao had fought more interesting opponents that could bring in PPV buys.