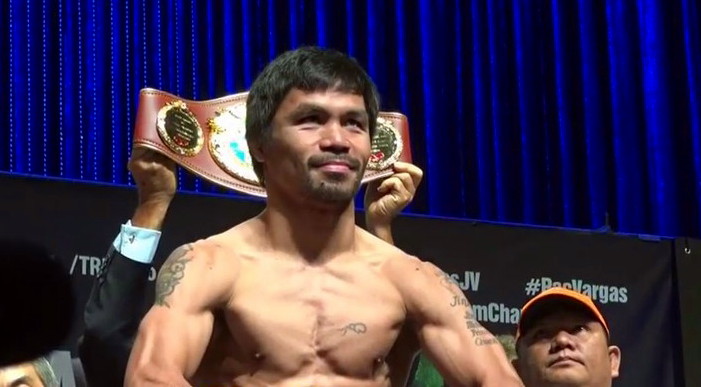 By Dan Ambrose: WBO welterweight champion Jessie Vargas (27-1, 10 KOs) sees a win over Manny Pacquiao (58-6-2, 38 KOs) leading to him becoming a superstar in boxing. Vargas feels that fighters need a win over a big name to get them to the next level. Vargas can test his theory by going out and beating Pacquiao in their fight on Top Rank pay-per-view at the Thomas & Mack Center in Las Vegas, Nevada.

What Vargas doesn’t realize is that Pacquiao is too old and past it for him to become a star if he beats him. At best, Vargas might become a little more recognizable to the fans that order the Pacquiao-Vargas fight, but that’s about it.

It’s unclear whether they’ll even care though because it’s not a fight that has a lot of the casual fan’s interest. The hardcore fans are mainly the ones interested in the Pacquiao-Vargas fight, but probably not a lot of them judging by the fact that the fight still isn’t a sellout. Only 13,000 tickets have been sold for the fight, which isn’t a good sign of success for a Pacquiao fight.

Vargas said this to RingTV.com about him being transformed into a superstar if he beats the 37-year-old Paquiao on Saturday night:

“Superstar. That’s what I’ve always wanted and dreamed of,” Vargas said. “In order to get to that position you have to beat a fighter that is respected by the entire world. After I beat him, everyone will know who Jessie Vargas is.”

The fans that didn’t buy the injury excuse just saw that Pacquiao was totally out of his class in that fight, and they saw him as a limited fighter with not as much talent as they might have originally thought he had. There’s something about fans when it comes to buying fights on pay-per-view. They don’t like the idea of paying to see fighters with marginal talent for some reason. Fans want to see winners, not guys that were recently soundly beaten.

For that reason, Vargas is not going to get the big career bounce from beating Pacquiao that he thinks he will, because it’s too late in the game for the Filipino fighter for Vargas to get much of anything for beating him. Vargas will need to beat better fighters than Pacquiao if he wants to become a superstar. I’m talking about guys like Kell Brook, Keith Thurman, Shawn Porter, Danny Garcia, Amir Khan, Jermall Charlo, Erislandy Lara, Julian “J-Rock” Williams, Demetrius Andrade Gennady “GGG” Golovkin and Saul Canelo Alvarez. Those are the guys that Vargas will need to clean out for him to become a star.

This is 2016 now. You can’t become a huge star in the cheap by beating an old timer like Pacquiao, because the fans are not going to be impressed with an empty win like that. It takes wins over solid guys that are young and hitting their prime, not fighters that left their prime 2200 yesterday’s ago.

“Superstardom will be everyone recognizing who I am and showing the love and support for being one of the few fighters that tries to carry themselves with a lot of dignity and honor,” Vargas said. “The target will be on me now, I just have to get used to it.”
Being recognizable might not be a big deal if Vargas loses the fight to Pacquiao. Yeah, he’ll be recognizable, but in the same way Brandon Rios is recognizable for him taking a beating against Pacquiao in 2013.

The fans are not going to recognize who Vargas is because the fight this Saturday night between him and Pacquiao will likely be seen by a small number of boxing fans in the U.S, and there won’t be a replay on regular cable, as far as I know. At least if HBO had carried the fight, it would be shown on regular HBO a week later, which means that the fight would be seen by a mess of fans. HBO chose not to televise the Pacquiao vs. Vargas fight for some reason.

We’ve heard the excuses about HBO no having the budget to televise two PPV events in November. My guess is HBO simply wasn’t enthralled with the Pacquiao vs. Vargas fight, because it made for bad television and wasn’t one that had a predictable high amount of buys.