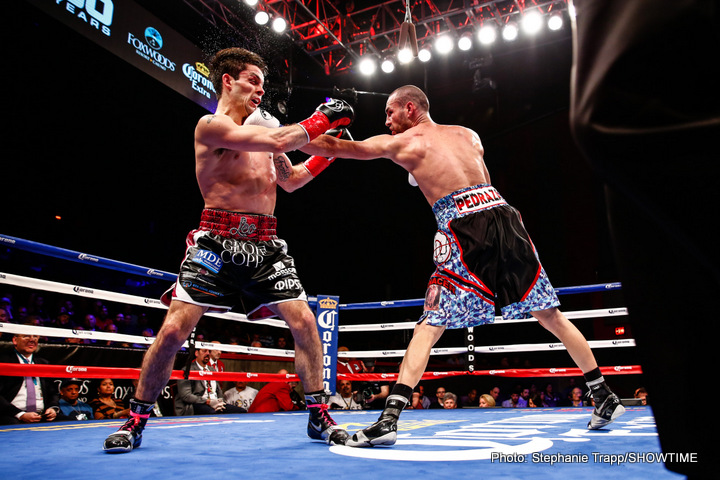 By Eric Baldwin: Unbeaten IF World super featherweight champion Jose Pedraza (22-0, 12 KOs) will be will be making his third defense of his title on January 14 against unbeaten #7 WBO, #9 WVA contender Gervonta Davis (16-0, 15 KOs) on the undercard of the James DeGale vs. Badou Jack super middleweight unification card on Showtime Championship Boxing at the Barclays Center in Brooklyn, New York.

Davis, 22, is one of Floyd Mayweather Jr’s fighters in his stable. It’s still too early to tell right now whether Davis is as good as his resume shows, because he’s been matched against largely journeyman level opposition since he turned pro in 2013.

The 56” southpaw Davis is going to be taking a considerable step up in competition in facing the 27-year-old Pedraza on January 14.

Promoter Lou Dibella said this to ESPN.com about Pedraza’s defense against the unbeaten Davis:
“I think it’s a hell of a fight, very dangerous, but it’s a fight Pedraza wanted,” said Dibella. “Davis has been screaming and yelling that he wanted a big fight, and he got what he wanted.”

Davis has not been matched tough, so it’s impossible to know for sure whether he’s as good as his resume would have you believe.

Davis, 5’6”, will be giving up close to three inches in height to the 5’8 ½” Pedraza. That’s going to be tough on him, because the Puerto Rican Pedraza likes to jab a lot to keep his opponents bottled up on the outside.

Since winning the vacant International Boxing Federation title last year with a 12 round unanimous decision over Andrey Klimov, Pedraza has beaten Edner Cherry and Stephen Smith by 12 round decisions. The Cherry fight was a really tough one with Pedraza winning a controversial 12 round split decision in October of 2015. Many boxing fans felt that 34-year-old Cherry did enough to deserve the win over Pedraza in that fight. Never the less, Pedraza fought well in the first part of the fight, and built up enough of a lead to cruise to a narrow points victory over the veteran Cherry.

“We feel very, very confident that Gervonta is going to win the fight, and we think that he’s going to do it in spectacular fashion,” said Mayweather Promotions CEO Leonard Ellerbe to ESPN.com. “It’s a tremendous opportunity, and he’s ready to step up and seize the moment. This is something me and Floyd have been working on for some time.”

It’s good news that Davis is getting a title shot so early in his career against Pedraza. However, it would have been better if Davis had gotten some more experience under his belt against some actual quality opposition before fighting Pedraza. That’s the one negative about this fight that you cannot ignore. Davis is coming into the fight with zero experience against quality fighters. You don’t like to see that from a guy so young like Davis. This can either world out great for Davis with him winning a world title or it can blow up in his face with Pedraza schooling him.

It only makes sense to put Davis in with Pedraza right now is if his handlers felt that they couldn’t get him any top contenders to fight. If all Mayweather Promotions could do is match Davis against weak journeyman level fighters like they’ve been doing for the last three years, then it makes sense to throw him in the ring with Pedraza to see if he can hit the jackpot and get lucky on January 14 in this fight. But I think it’s a risky thing for them to be doing with Davis, because he really needs more polishing. In looking at Davis’ previous fights, he just jumps on his over-matched opponents and looks to take them out immediately. There’s no finesse involved. Davis is going to need to show more areas of his game against Pedraza, because he’s not likely to fold up immediately like the soft opposition that been fed to him in the past.

History would suggest that Davis won’t be able to beat Pedraza, because of his lack of experience against quality opposition. If Davis had been matched against even moderately talented opponents to get ready for this fight, then he might have a chance of pulling off the upset against Pedraza. That’s not happened though.

Malik Scott: Too good not to box »