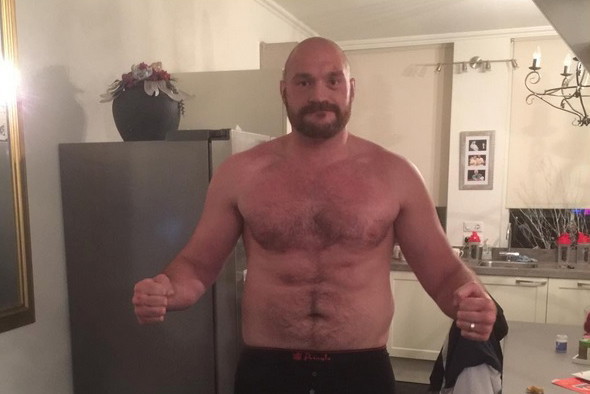 By Scott Gilfoid: Former IBF/IBO/WBA/WBO heavyweight champion Tyson Fury will be back in the future to resume his stalled career, and he’ll have a “massive” future, according to his trainer Peter Fury. He thinks Fury will be reinstated in getting s boxing license back once he presents to the BBCofC, he’ll be given his license again.

It’s one thing for Peter to believe that Fury will be able to resume his career, but it’s another thing for him to think he’s going to a massive future ahead of him.

Fury might get a massive payday against Anthony Joshua when he comes back, but I don’t think he’s going to win. I think he’ll lose, and lost to the other top heavyweights in the division.

“Once Tyson Fury produces all of his records of what he’s been through, the Boxing Board, I don’t think, will have any option but to give him his license back because this is a guy that’s needing medical treatment. He is the lineal heavyweight champion of the world; he’s done what nobody else could do. He’s in the pinnacle of his career; he’s only 28 years of age. He’s got a massive future.”

For Fury to make a mark on boxing when he returns to action, he’s going to need to beat guys like Joshua, David Haye, Deontay Wilder, and Joseph Parker. If Fury can beat guys like them, then he’ll have massive success. But if all fury does is come back and get royally whipped by Joshua or Wilder, for example, then his career will be toast. Fury can’t just come back and get torn apart by Joshua and that be construed as having great success. The money will be good, but it won’t be great news for Fury’s career if he gets trounced by Joshua. That would be bad for Fury.

With Tyson Fury out of the picture for at least a year, Peter needs to focus on his son Hughie Fury to see if he can make something out of his career. I don’t think Hughie does, but Peter believes he can make big things happen. I’d be surprised if that were true. I don’t see it happening.

“He is controversial. He lights up boxing, whether it be good or bad. I think it’s a case of he is the world champion, the true world champion,” said Peter about Tyson Fury.

You can only go so far in the sport if the main thing going for you is your personality. George Foreman and Muhammad Ali were both able to make big things happen with their careers because they had a lot of talent as well as a gift for gab. Tyson Fury has the ability to speak well, but he doesn’t have great talent inside the ring. He’s just a tall stork-like fighter who has been lucky to have made it this far. If you put Fury in with a decent heavyweight who isn’t 40-years-old like Wladimir, I see him getting beaten.

“I think when he does come back, he’ll be welcomed with open arms. Especially the way he’s voluntarily relinquished his belts,” said Peter about Fury.