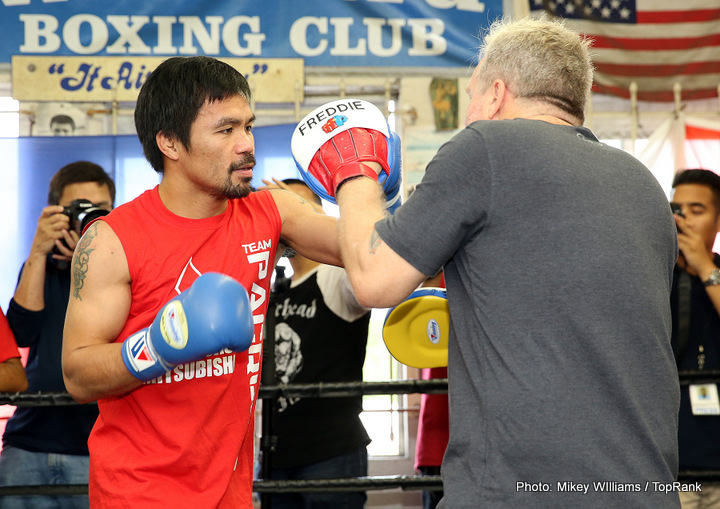 By Chris Williams: To many boxing fans, the Manny Pacquiao vs. Jessie Vargas fight is not much of a fight in terms of the potential big fights out there in the sport. The Pacquiao-Vargas fight, which will be taking place on November 5, hasn’t appeared to catch on with the fans.

Pacquiao and Vargas’ promoter Bob Arum of Top Rank believes the fight is going to do really well on pay-per-view, because he believes that the 27-year-old Vargas will bring in the Hispanic fans to purchase the fight.

Pacquiao’s last fight against Tim Bradley brought in only 400,000 buys last April, which was considerably fewer than Pacquiao’s previous bout against Floyd Mayweather Jr. last year in May 2015. That fight brought in 4.7 million buys.

Arum says the reason why the Pacquiao vs. Bradley III fight didn’t do as well is because the two fighters had faced each other before, and he feels the fans didn’t have a reason to see them fight again. Another reason why Arum feels the Pacquiao-Vargas fight will do well is because he sees Vargas bringing in the Hispanic element, even though he’s not from Mexico. Arum says that Vargas has been on Spanish television and radio in talking about the Pacquiao fight, and he feels the fans will want o pay to see the fight.

“He [Pacquiao] didn’t sell as much in the Bradley fight, and I think the reason it didn’t sell is because it was the third fight,” said Arum to Fighthype.com. “Bradley was not Hispanic obviously. Jessie Vargas brings the Hispanic element into this. He’s a very articulate kid, articulate. But he speaks perfect Spanish, and he’s been on all the Spanish television and radio. The Spanish people are paying attention. How do I know that, because all the closed circuit and the bars and restaurants, they’re going record business. That indicates to me, at least to the Hispanic community, the fights catching on. Also, when have you see a card with four world title fights with fighters from all over the world – China, Thailand, Japan, Mexico, and the United States. It’s really a tremendous night of boxing. Four world title fights on the same card. So this is much more appealing than the Bradley fight was, Pacquiao-Bradley,” said Arum.

If Arum is counting on Vargas to be the one that brings in all the PPV buys for this card, then he might be sadly disappointed when that fails to happen. If you’ve got a fighter like Vargas, who has never proven himself as a pay-per-view draw, or even proven himself as someone that brings in good ratings on HBO, then it doesn’t make much sense to suddenly start assuming that he’s going to bring in a ton of PPV buys just because he’s facing Pacquiao.

Arum might be assuming too much about what Vargas is capable of doing. As a promoter, you’ve got make logical choices, and no jump to conclusions about what you think a fighter is worth. The only way you can really predict the future with a particular fighter is to go by what they’ve done in the past. In the case of the 27-year-old Vargas, he’s not done anything at all to show that he’s a draw for PPV.

I think there’s a good chance that the Pacquiao-Vargas fight will fail in a spectacular way to bring in buys or to even do as well as Pacquiao’s last fight against Bradley, which brought in only 400,000 buys.

I think Arum might be assuming that Vargas will bring in a lot of buys from fans in the Hispanic community due to the tons of buys that Juan Manuel Marquez helped bring in for his last two fights against Pacquiao many years ago. However, Marquez was an established fighter who had proven himself as a boxing great. The news of last two Pacquiao-Marquez fights had boxing fans interested in the fight from the moment the match was first announced.

It’s different with the Pacquiao-Vargas fight. It’s not attracted a lot of interest, and it’s still not attracting interest. You can see what Arum and trainer Freddie Roach appear to be doing by mentioning other fighters that could come after the Vargas fight like Gennady “GGG” Golovkin, Saul “Canelo” Alvarez, Terence Crawford and Vasyl Lomachenko.

When you see that kind of stuff going on, it tells me that Arum and Roach are trying the old fashioned way of attracting interest in a turkey of a fight by name dropping as much as possible. I don’t think it’s going to work for Arum and Roach, because Pacquiao-Vargas is such a bad fight that it’s not something that can be saved by name dropping big names to connect them with Pacquiao.

What hurts the Pacquiao-Vargas fight, besides Vargas being an unknown to the casual boxing fans, is the fact that the hardcore fans remember how easily Tim Bradley beat him last year. Bradley had an eays time beating Vargas, and he’s done nothing since then to prove that he’s improved since that time. Vargas’ only fight since his loss to Bradley was against Sadam Ali, a fighter that has done precious little at the pro level. Ali was a good fighter as an amateur, but he’s done zero at the pro level.

I think Arum is going to find out the hard way that Vargas IS NOT Marquez in terms of popularity.