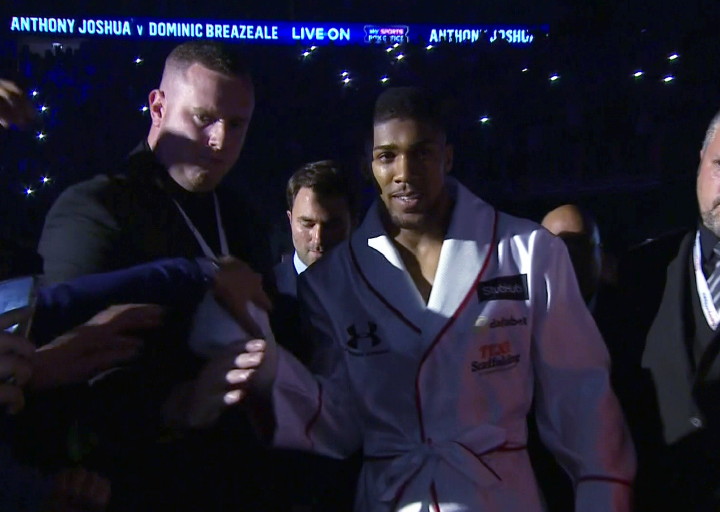 By Scott Gilfoid: IBF heavyweight champion Anthony Joshua could be facing WBC champion Deontay Wilder’s leftovers in facing Eric Molina in his next fight on December 10 at the Manchester Arena in Manchester, England. That’s the name that is being mentioned for Joshua.

Molina, 34, still hasn’t been officially named as Joshua’s next opponent, but he’s expected to. It won’t be the greatest news for the boxing world if that’s who Joshua winds up fighting. I hate to say it, but this going to be a step down for Joshua from his last fight against Dominic Breazeale.

Molina has not doing anything to earn a second world title shot after his 9th round knockout loss to WBC champion Deontay Wilder in 2015. I COULD understand Molina getting a second world title shot if he had beaten some quality heavyweights since his loss to Wilder, but that hasn’t happened. Instead, Molina beat a 40-year-old Tomasz Adamek last April in stopping him in the 10th round in Poland.

In Molina’s other win, he defeated some guy named Rodricka Ray (5-8-1) last October. Nice record, huh? Honestly, I don’t see those wins as being good enough for Molina to be getting a world title shot. Of course, I don’t think Molina would be getting selected by Joshua’s promoter Eddie Hearn for him to be competitive. I see it as a choice to make sure that Joshua doesn’t get beaten before his big payday fight against Wladimir Klitschko in March or April next year.

I also see it as a move to partially please Showtime Boxing, who will most likely pipe the Joshua-Molina fight into the U.S to televise it to the American fans. Molina is an American, so the thought is that by picking him, it would partially please Showtime and the U.S fans due to him fighting an American fighter. I for one won’t be pleased to see Joshua fighting Molina, but then again, I like quality fights between champions and contenders that have worked their way to title shots.

“Eddie did contact us through email and he did throw a proposal out, but it was just something to get a feel of where he’s at,” said Molina to skysports.com. “I think if the fight is going to be made, we should have something by the end of the day. I haven’t heard anything from Eddie Hearn what he’s planning now or what, but every time I hear something there is a new name added to the list.”

Well, if Hearn doesn’t select Molina as the opponent for Joshua, then he’s going to need to move quickly to find someone else, because there’s not much time to market his fight before December 10th. Hearn wants Joshua’s fight to be on Sky Box Office pay-per-view in the UK. It would be a HUGE ask to present Molina as Joshua’s opponent for a PPV bout instead of someone dangerous like Kubrat Pulev or Luis Ortiz. But for Hearn to be able to drum up interest in Joshua’s fight, he needs to announce the fight soon. Hearn can’t wait until the week of the fight before suddenly saying, ‘Hey fans, I’ve got a great fight between Joshua and Molina on pay-per-view. Please order it!’ It’s not going to work.