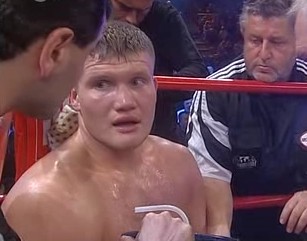 By Jim Dower: Heavyweights Alexander Dimitrenko and unbeaten Joseph Parker will be facing each other this Saturday night in what shapes up to be a mismatch at the Vodafone Events Centre, in Manukau City, New Zealand. Parker is taking a fight to get ready for his title shot against IBF champion Anthony Joshua.

Parker (20-0, 17 KOs) needed a tall heavyweight to get him ready for the 6’6” Joshua, and the 6’7” Dimitrenko (38-2, 24 KOs) is the perfect opponent to get him ready. Parker, 24, could wind up facing Joshua on November 26, as this is a fight that Joshua’s promoter Eddie Hearn is talking about wanting to make.

Hearn says that Parker is the most reasonable in agreeing to what’s offered, and he seems to be showing the most amount of interest in making the fight happen.

It’s a risky fight for Parker to be taking on a big heavyweight like Dimitrenko, because he could suffer an injury if he’s not able to get the big Ukrainian fighter out of there quickly. Dimitrenko isn’t a dangerous heavyweight, but not need to be for him to open up a cut on Parker to delay his fight against Joshua.

Parker needs to get Dimitrenko out as fast as possible to prevent any possible cuts from occurring in the fight. The longer the fight lasts the greater risk for Parker. It’s a quick turnaround for Parker to get back into the ring in November to fight Joshua.

You can understand why Hearn would want to make the fight with Parker now, because he won’t have much time to prepare for the Joshua fight. Parker is also getting better with each fight. It’s in Hearn’s best interest to have Joshua vs. Parker to take place now rather than in 2017 after he’s gotten a couple of more fights under his belt. Joshua is a good fighter, but he’s still pretty much the same fighter that won controversial decisions in the 2012 Olympics in London over Roberto Cammarelle and Erislandy Savon.

Seven years ago, Dimitrenko was a good prospect that was being groomed for a world title fight against one of the Klitschko brothers. However, Dimitrenko was soundly beaten by Eddie Chambers by a 12 round decision. That loss took the momentum out of Dimitrenko’s career, causing him to veer away from fighting better opponents until he was matched against Kubrat Pulev four years ago. Dimitrenko lost that fight by an 11th round knockout. Since that time, he’s been matched weakly up until now.

Dimitrenko’s management didn’t do him any good by only matching him against good opponents ever three or four years. Dimitrenko should have been put in with increasingly better opponents after his loss to Pulev, but that didn’t happen. now four years later, Dimitrenko is being put in with one of the beat heavyweights in the division in the 6’4” Parker. It’s not likely to go well for Dimitrenko.