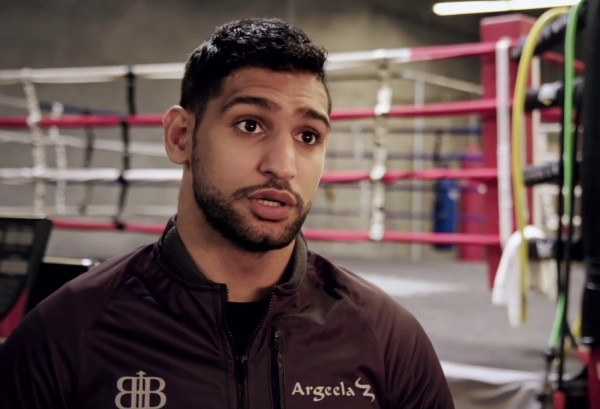 By Scott Gilfoid: It looks like Amir Khan’s knockout loss to Saul Canelo Alvarez last May has instilled a sense of urgency in Khan with him talking about wanting to fight Kell Brook. That fight would likely take place at the end of 2017. Khan says he wants a tune-up fight in his next match in January.

Let’s be honest; Khan can’t afford to wait much longer before fighting Brook, because both guys are nearing the end of their careers in terms of being relevant fighters. If they don’t fight each other soon, it’ll be too late for their fight to attract interest. I know some boxing fans will say that Brook is only 30 and has a ton of time remaining in his career.

If Brook were to go back down to 147 and go after WBC champion Danny Garcia or WBO champion Jessie Vargas, then I think he might have some more time left as a relevant contender/paper champion. However, Brook says he wants to fight at 154 to fight the winner of the Liam Smith vs. Saul Canelo Alvarez fight. I can’t see Brook winning that.

That’ll be loss No.2 for Brook, and I expect a whole bunch of additional losses for him coming down the pipeline as he faces other top 154lb contenders/champions. That’s why it’s EXTREMELY important for Khan and Brook to fight now before each of them are no longer relevant. Brook doesn’t belong at 154, and Khan doesn’t belong at 147. Yeah, these guys can get a lot of record-padding wins over weak fighters, but as soon as they’re thrown in with someone good, I see them both getting beaten soundly.

After fighting just once in 2015 and 2016, Khan (31-4, 19 KOs) plans on being extremely busy in 2017 by fighting three times in the years. That’s the plan at least. Whether Khan actually do that remains to be seen. Khan has somehow lost his way in the sport, as it’s become a rarity for him to fight nowadays. You hear about Khan traveling all over the place, and you wonder why isn’t he fighting? Khan seems be motivated to get busy with his career all of a sudden following his 6th round knockout loss to former WBC middleweight champion Saul Canelo Alvarez last May in Las Vegas, Nevada.

Khan is currently nursing his surgically repaired right hand, and he believes it’ll be healed and ready for action in January of next year. Khan wants to fight in January, May and at the end of the year in 2017. Frankly, I’ll be surprised if Khan sees action more than once in 2017. If Khan takes on someone good in January, I’d be expecting him to get knocked out. If he does a soft job like the guys that he was fighting after his knockout los to Danny Garcia in 2012, then I see him winning, but it might take someone with zero power.

“I want to fight again in January, then in May and again before the end of 2017,” he told The Sun. “I’m going to start training and make sure my hand is fully recovered. I don’t want to rush into a fight at the end of this year. A fight between me and Kell is not only a big fight in England, but it could be big globally. Welterweight is the weight for me and there are big fights out there still – including Kell.”

The way I see it, Khan might even lose his tune-up fight in January against whomever his management digs up for him to fight. Khan was knocked out really badly by the hulking middleweight Canelo Alvarez last May. With a knockout like that, I think it’ll be interesting to see if Khan’s punch resistance is gone. We’ve seen that kind of thing happen in the past with fighters after they’ve suffered knockout losses. When they return to the ring, they wind up getting knocked out by guys that they would have never been KO’ed in the past. If Khan gets stopped by his next opponent, then he needs to try and fight Brook straightaway in his next match in May, if there is a next match, because I don’t think Khan would be able to get past that fight without getting knocked out again.

“I want my next fight to be in Britain. I know it’s going to have to be a tune-up, having lost the Canelo fight, and also having had the hand surgery,” said Khan.