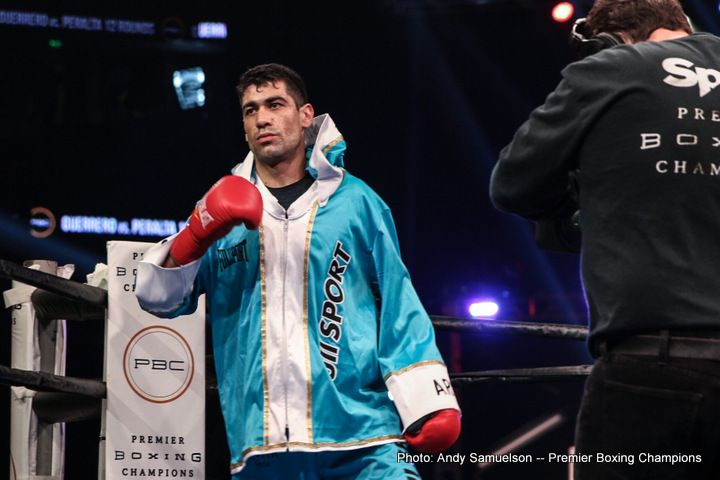 By Allan Fox: David Emanuel Peralta (26-2-1, 14 KOs) saw his fortunes change last Saturday night with his 12 round split decision win over former two division world champion Robert “The Ghost” Guerrero (33-5-1, 18 KOs) at the Honda Center in Anaheim, California. The 5’11” Peralta says he had been planning on retiring from boxing after his fight against Guerrero, but after beating he says he’s going to be quitting his taxi driving job to focus on his career.

Peralta wasn’t supposed to win the fight, but he did a great job of outworking Guerrero to get the win. Guerrero’s dad/trainer Ruben Guerrero felt that the judges didn’t score the fight properly, because he believes that Robert should have won all 12 rounds of the fight. He saw it as a one-sided affair.

“I wanted to retire before this fight,” said Peralta. “I was a cab driver, driving cabs in Argentina. I was offered a chance to fight in the U.S. and came away victorious. I came to fight and I knew I would win.”

Guerrero could have won the fight if he had been able to keep up the pace that he set in the early going. In the first quarter of the fight, Guerrero looked as good as he ever had earlier in his career. He was quite impressive. Guerrero looked like he lost concentration around the fourth or fifth round of the fight, and he stopped attacking Peralta like he had in the earlier rounds.

Peralta then got confident and started to attack Guerrero nonstop with shots. Peralta wasn’t throwing with a lot of punching power, but it was enough to make Guerrero stop throwing his own shots. He kept holding back instead of letting his hands go. He wasn’t good. Guerrero looked worse than he had in his losses to Floyd Mayweather Jr., Keith Thurman and Danny Garcia. Only Guerrero knows what happened to him. He stopped throwing punches just when he needed to let his hands go. 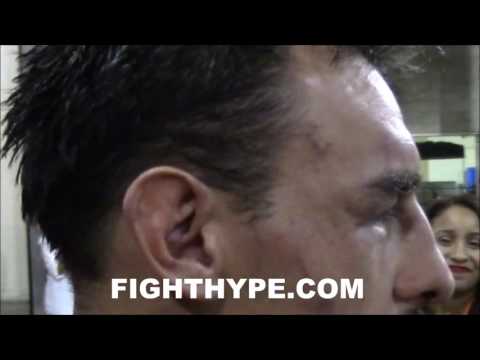 “Now I want to fight bigger names,” said Peralta. “No way I’m going to retire now. I’ll be ready again to fight soon, this was no joke and I can beat a lot of great fighters. Hopefully I get good fights after this performance. I won’t be a taxi driver anymore.”

Peralta’s purse for the Guerrero fight was only $30,000. Hopefully for Peralta’s sake, he can get a bump up in pay for his future fights. Guerrero’s purse was $500,000. The way the two fighters fought, you can argue that Peralta should have been the one getting $500K and Guerrero $30K. Peralta looked like the more talented fighter of the two, and definitely he was the guy that put in the better effort out there last Saturday night.

Al Haymon, Guerrero’s manager, needs to try and sign Peralta up if possible, because he looks like he’s got at least three to four good years left in him. He can be a major player in the welterweight division right away. He’s got the skills, the size, work rate and the chin to be a threat to a lot of the top fighters in the 147lb division. To be sure, there are guys that would likely have too much power for Peralta like Errol Spence Jr, but there aren’t too many fighters that would beat him in the division.

The 33-year-old Peralta looked better than a lot of the top contenders in the welterweight division. I don’t know how such a talented gem like this could have been hidden for so many years. Peralta has been a pro for 11 year years, and he’s spent all of them in Argentina honing his craft against the many sluggers in that country.

There are a lot of very good fighters that slip past the radar screen in Argentina, and Peralta is just one of them. You have to wonder how many other high quality fighters are out there in Argentina that the boxing world isn’t aware of right now. There could be another Marcos Maidana or Lucas Matthysse type talent hidden in this incredible country.

Peralta should have been given credit for a knockdown in the 9th round when he put Guerrero down with two hard shots to the head. Peralta came at Guerrero quickly, hitting him on the run. Guerrero fell against the ropes and was held up by them.

The referee didn’t explain why he didn’t score it a knockdown, but it clearly was a knockdown. Peralta had a good attitude about the missed knockdown, saying, “He is a very good fighter but I hit him with the harder shots. I thought I knocked him down but if the referee feels it’s not a knockdown I have to respect that.”

Guerrero is one of Al Haymon’s fighters in his Premier Boxing Champions stable of fighters. If Haymon wants to let Guerrero try and avenge his loss to Peralta, he can probably put that fight together if he wants to. Guerrero isn’t asking for the rematch, and I don’t think it would be a very good career move for him to fight the tall Argentinian a second time. With the way that Peralta dominated the last eight rounds of the fight, I suspect that he would beat Guerrero even easier the second time around.

“I thought I clearly won the fight,” said Guerrero. “For the judge to say I lost eight rounds sounds crazy to me. Peralta was very awkward but I felt I won. I won the rounds when I boxed. This is very disappointing but I’ll be back, that you can count on!”

Guerrero needs to accept his defeat and move on. If he can learn from the loss, then he can fix the problem in his future fights. But if he continues to insist that he won the fight, then he’s only kidding himself. Guerrero should work on his stamina so that he can fight hard for the full 12 rounds instead of just three or four like now. Guerrero might also want to move down to the lightweight division at the minimum, because he’d do better in that division if he wasn’t too weight drained.