Robert Guerrero: I’m not a washed up fighter 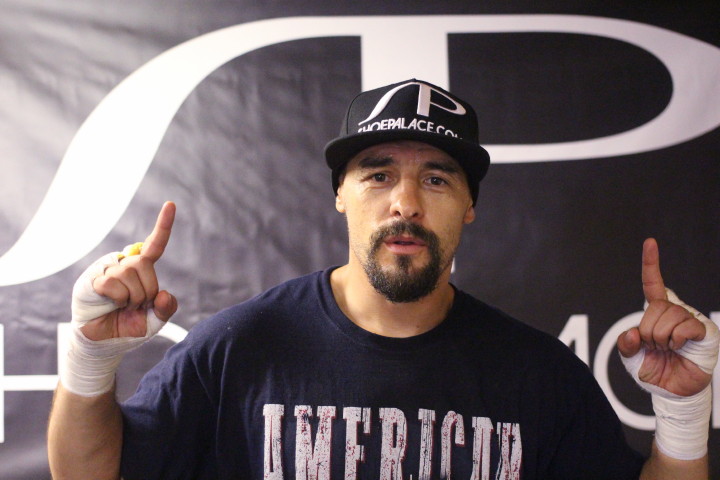 By Dan Ambrose: #13 WBC welterweight contender Robert “The Ghost” Guerrero (33-4-1, 18 KOs) insists that he’s not a washed up fighter as he head towards his August 27 fight against little known 33-year-old David Emanuel Peralta (25-2-1, 14 KOs) in their scheduled 10 round fight this month on Premier Boxing Champions on Spike TV from the Honda Center in Anaheim, California.

A lot of boxing fans see the 33-year-old Guerrero as being an over-the-hill fighter due to him having lost three out of his last five fights. When a fighter gets beaten that often, it makes it hard not to say they’re washed up.

In Guerrero’s case, he really should have another loss on his record in the last year because his fight against Aron Martinez last year was very controversial where many boxing fans thought that Martinez was robbed. Guerrero was knocked down hard by Martinez in round four. Martinez to dominate the first five rounds of the fight.

With Martinez’s knockdown, he should have gotten the decision. What was really bad about the knockdown was the fact Guerrero appeared to lose consciousness after getting nailed by a series of hard shots from Martinez. Guerrero was defenseless as he was falling. Why the referee didn’t stop the fight is anyone’s guess, because usually in a fight like that, the referee will stop it immediately when he sees a fighter defenseless like Guerrero was. It’s a credit to Guerrero’s heart and recuperative powers that he was able to get up from the knockdown to come back and get the decision. But it wasn’t a good sign that Guerrero was knocked down by Martinez and had to struggle to win a controversial decision.

“He’s going to realize once he’s in the ring with me that I’m not some washed up fighter like some may think. I got plenty of fight left in me and Peralta will find out what I’m all about on August 27th,” said Guerrero.

The Guerrero vs. Peralta fight starts at 9:00 p.m. ET on August 27 on Premier Boxing Champions on Spike. It should be a good fight that will let us know whether Guerrero IS washed up or if he has anything left. With Peralta not being a major player in the welterweight division, there will still be a lot of questions that need to be answered about Guerrero no matter how good he looks in the fight. Beating an unknown fighter like Peralta isn’t going to do much to quiet the many critics out there who see the soon to be 34-year-old Guerrero as having seen better days in his career.

“Anytime you’re facing a fighter from Argentina you know you’re in for a tough fight. Peralta knows this is his chance to make a name for himself so I know he’s coming with his very best,” said Guerrero. “He’s had a lot of time to prepare for this fight but I’ll be well prepared for anything he brings.”

What’s disturbing about the Guerrero-Peralta fight is the fact that Peralta was recently beaten by a fighter named Cristian Nestor Romero (16-8-1, 8 KOs) by a 10 round split decision last year in April. It’s not exactly motivating to see Guerrero fighting this class of fighter, because it makes you realize how badly Guerrero has gone downhill with his once promising career.

When you get to the point where you’re no longer fighting actual contenders, then it tells you that your days are numbered in the sport as a major player. Peralta was held to a four round raw in September 2014 by Segundo Ariel Senteno (7-4) and beaten by a 5th round knockout by Cluadio Alfredo Olmedo in July 2011.

Guerrero has been beaten by Keith Thurman and Floyd Mayweather Jr. In 2014, Guerrero had to battle hard to defeat Japanese fringe contender Yoshihiro Kamegai by a 12 round unanimous decision in June 2014. That was a very hard fight for Guerrero in which he took a lot of hard head shots. His face was badly cut up and swollen around the eyes after the fight. Guerrero said that he could have made the fight easy if he had wanted to, but he wanted to entertain the boxing fans.

I think it might be better off for Guerrero to move back down in weight to the lightweight division if he can still drop weight. He was a much better fighter when he was fighting at featherweight, super featherweight and lightweight. The money is obviously better at welterweight for Guerrero, but he doesn’t have the talent to make things happen in this division. His power isn’t there for him.