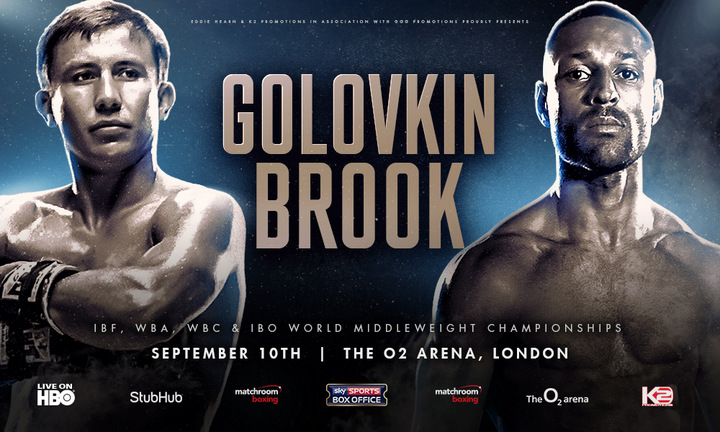 By Scott Gilfoid: Kell Brook (36-0, 25 KOs) is guarding his game plan for his September 10 fight against IBF/IBO/WBA/WBC middleweight champion Gennady “GGG” Golovkin (35-0, 32 KOs) like a mother hen protecting her eggs. Brook doesn’t want to give away any secrets for fear that Team Golovkin will devise a strategy to negate the tricks that the 30-year-old Brook will be attempting to use when the two unbeaten fighters get inside the ring at the O2 Arena in London, England.

One thing that Brook may have unknowingly revealed is the fact that he’s using a lot of movement in training to keep from getting nailed so frequently by the hard hitting Golovkin. That right there pretty much tells you what Plan A will be for the British Brook.

Golovkin is likely going to try and stay elusive for 12 rounds, pot shot, tie up, and hope to make it to the final bell so that maybe get a decision win, albeit a controversial one.

“I’m working on a few things but this is the fight of my life so I’m keeping it to myself,” said Brook to skysports.com. “Nobody in Britain has done what I’m going to do on September 10 – shock the world by jumping up two weight divisions to beat the man everyone’s afraid of. Anything we’re working on, we’re keeping close to our chest. This is the fight and you can get hurt in there so I need to be 100 per cent in it.”

I don’t think it really matters what secret plan that Brook is going to use in this fight. It’s all stuff that Golovkin has obviously seen before in his career. It’s not like Golovkin has never faced a runner or a clincher before. Brook was able to get over on former IBF welterweight champion Shawn Porter in their fight in 2014 by coming out and gluing himself to the American fighter by clinching him nonstop in every round to smother his offense to turn the fight into one in which one or two punches decided each round. It was one of the biggest stall outs I’ve ever seen in a fight.

If Brook’s plan is to run around the ring all night, he’s going to get tired and he’s going to get trapped by Golovkin and taken out. No one is able to run from Golovkin and beat him with that tired old plan. If that’s an idea that Brook’s trainer Dominic Ingle has given him to prepare him for Golovkin, then Brook needs to give him the royal boot and run out of camp. Brook needs some useful advice that can help him win this fight.

Running isn’t going to do the job and neither is holding 10+ times per round like he did against Porter. I mean, I don’t think referee is going to allow nonstop holding to be used, because they’re likely going to be tipped off by Team Golovkin ahead of time to watch out for this spoiling tactic Brook. When a referee has been tripped off ahead of time about certain things, it kind of puts them under a spotlight to do their job or else they come across looking like inept and useless in the ring.

If I’m the referee for the Brook vs. Golovkin fight, I’m not going to just stand there like a dolt while Brook sets a record for nonstop holding in the fight to try and stall out each round. I’m going to warn Brook two or three times to stop with the octopus holding, and if he doesn’t follow my instructions, I’m going to start taking off points. If Brook still won’t stop holding after I’ve taken two points away from him, then I’m disqualifying him in the same way Henry Akinwande was disqualified in the 5th round in his fight against Lennox Lewis for excessive clinching in July 1997. If you look at the Lewis-Akinwande fight and compare it to the Porter-Brook fight, you’ll quickly discover that Brook was holding just as much as Akinwande. The main difference is the referee did his job in the Akinwande vs. Lewis fight, and the referee in the Porter vs. Brook fight failed to do the same. 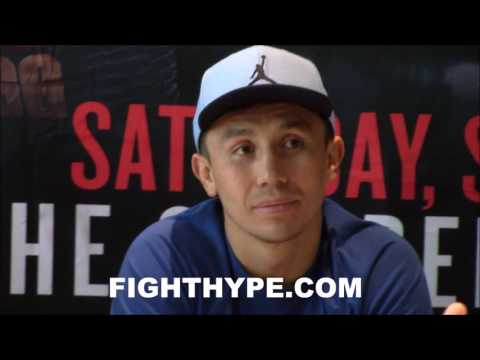 “I’m normally heavy. Not as heavy as I am now but with the science behind it, I’ve been working my legs with the weights but keeping the speed and movement,” said Brook. “I’ve been using all the ring and probably a bit too much, getting used to moving a lot because anything that can happen on the night.”

So there it is. Brook has given away his major Plan A for the Golovkin fight by spilling the beans by revealing that he’s going to be using a lot of movement in the ring in the fight. I can’t say I’m the least bit surprised. I know we’ve heard from Golovkin’s trainer Abel Sanchez that he believes that Brook will try and fight Golovkin in order to impress his boxing fans at the O2 Arena in London, but I don’t believe he’ll do any such thing.

I think Brook is one of those guys that will try and win a fight using all methods necessary rather than wanting to go out and impress the boxing fans with his performances. If Brook was more interested in impressing his fans every time out, he wouldn’t have clinched Porter all night long in their 2014 fight, and he wouldn’t have faced so many weak opponents during his 12-year pro career.

I think Brook’s main concern is to win his fights at all costs. I don’t think he cares whether he wins ugly or not, as long as he wins. As such, I think we’re going to see a lot of ugly running, holding and pot shotting from Brook on September 1-0 against Golovkin, and it’s likely be a dreadful to watch fight. I think it’ll be like a game of cat and mouse, with Golovkin trying to chase Brook down so that he can rip him apart, and Brook staying on the run and grabbing Golovkin any chance he can get.