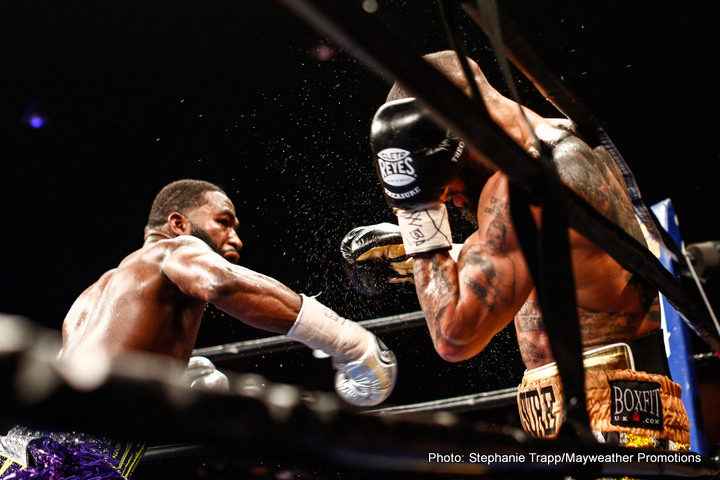 By Chris Williams: Adrien “The Problem” Broner (32-2, 24 KOs) says he’s still interested in getting inside the ring and giving former eight division world champion Manny Pacquiao (58-6, 38 KOs) a real working over. Broner says he would knock the 37-year-old Filipino star out if he were to get a fight against him. Broner says a fight between them would bring in a lot of pay-per-view buys. Broner also feels that a fight between him and Floyd Mayweather Jr. would bring in more buys than anyone else he could face.

Broner thinks Pacquiao is wasting his time fighting WBO welterweight champion Jessie Vargas on November 5 on HBO pay-per-view, because he doesn’t think that fight will interest fans enough for them to want to see it. Broner could very well be right, but the options that Pacquiao’s 84-year-old promoter Bob Arum presented to him were a choice of Terence Crawford and Vargas.

Neither of those fighters were pay-per-view worthy opponents. Broner was briefly considered for Pacquiao’s November 5 fight, but he reportedly priced himself out by asking for more than what Arum was willing to pay. It would be interesting to know how many more PPV buys a Pacquiao vs. Broner fight would bring in compared to the unwatchable Pacquiao-Vargas fight.

I wouldn’t be surprised if Pacquiao-Broner would do five times the PPV numbers than Pacquiao-Vargas. That fight will be lucky if it brings in more than 300,000 PPV buys in my opinion. A fight between Pacquiao and Broner could bring in over 1 million buys, possibly as much as 1.5 million buys.

“Boxing needs me just like UFC needs [Conor] McGregor,” said Broner to esnewsreporting.com. “Pacquiao, I’d [expletive] him up. I’d have a big possibility of stopping Pacquiao. I can hit with both hands. I can match his speed, and I’m a sharper puncher than Pacquiao. I feel like anybody I get in the ring with right now, I’m going to do some damage to,” said Broner.

I agree with Broner. I think he would beat Pacquiao by knocking him out or maybe giving him the same boxing lesson that Floyd Mayweather Jr. did last year in his 12 round decision win over the Filipino fighter in their ‘Fight of the Century’ in May 2015 at the MGM Grand in Las Vegas, Nevada. I’m not sure that Arum would be too pleased with seeing his gravy train fighter Pacquiao get beaten again, especially with it not happening against one of his Top Rank stable fighters.

It’s probably in Arum’s best interest that if Pacquiao loses, he loses to one of his Top Rank guys like Vargas or Terence Crawford, because it likely helps Arum if one of those guys beats Pacquiao rather than a fighter outside of his Top Rank stable like Broner. If Broner beats Pacquiao, then it likely helps his adviser Al Haymon, because Broner is one of Haymon’s fighters.

If Pacquiao is going to lose to someone, I’m guessing that Arum would prefer that guy be Crawford or Vargas. These guys would get a little more popular if they took Pacquiao’s scalp, and that would in turn help Arum’s Top Rank stable, because they’re going to be around for a lot longer than Pacquiao will be unless they bolt from Top Rank when their contracts expire in the future.

When told that Floyd Mayweather Sr. would like for Floyd Sr. to fight Broner in seeking his 50th win, Broner said, “I bet he do. Anybody else he fights, they ain’t going to do the numbers we going to do, and that’s with Pacquiao too. Don’t nobody want to see Pacquiao and Jessie Vargas,” said Broner.

Broner is probably right about a fight between him and Mayweather and Pacquiao doing good pay-per-view numbers. A lot of boxing fans would love to see Mayweather fight Broner or Pacquiao fight Broner. Those would be very interesting fights from the buildup to the actual fight. It’s still hard to understand why Pacquiao chose to fight Vargas. That move has ‘fail’ written all over it.

Pacquiao should have told Arum to go back to the drawing board when he dangled fights against Crawford and Vargas for his next fight. Pacquiao should have told Arum to get him Danny Garcia, Keith Thurman, Amir Khan, Adrien Broner or Saul Canelo Alvarez. A fight against one of those guys would likely attract a lot more interest than a tired fight against Vargas or a match against a runner like Crawford.

Pacquiao doesn’t need to chase a runner like Crawford around the ring for 12 rounds. Pacquiao made the decision to bless one of Arum’s poor choices for him to fight, and now he’s stuck with the Vargas fight. I think Pacquiao could have made a lot more money if he had given Arum his marching orders to go out and put together a fight between him and Broner or one of the above mentioned fighters. Pacquiao needs to be maximizing his income by facing the best fighters possible at this point in his career rather than wasting time fighting guys like Vargas or Crawford.

Broner has got the skills to give Pacquiao another embarrassing loss if the two of them were to face other right now. Like I said, I don’t think Arum will let Broner get a chance to fight Pacquiao at this point in his career. Pacquiao only has maybe two or three fights left before he retires for good from boxing, and I think Arum is going to make sure that all of those fights are against his own Top Rank fighters so that his opponents will be more valuable to his Top Rank stable.


« Spence: A fight against Crawford could happen in future