Canelo: Golovkin is talking stupid; I will beat him

By Dan Ambrose: Mexican star Saul “Canelo” Alvarez thinks that IBF/IBO/WBA/WBC middleweight champion Gennady “GGG” Golovkin is talking foolishly lately with the way he’s trash talking him in the media. Canelo says he thinks the people around Golovkin are changing him to get him to start talking trash the way he’s now doing. Canelo say he doesn’t care. The trash talking will make him angry and he’ll use that to make the fight with him more interesting when he does face him in the future.

Canelo says he has no doubts that he’ll beat Golovkin when the two of them do face each other. Like his promoter Oscar De La Hoya, Canelo insists that the fight with Triple G will happen, but the negotiations will be complicated.

Canelo doesn’t say why the negotiations with Golovkin will be difficult. He also doesn’t say whether they’ll insist on a catch-weight handicap to try and boil Golovkin’s weight down to try and weaken him to gain an edge.

“That fight will happen, and there have been talks about it,” said Canelo to Fighthype.com about a fight against Golovkin. “They are complicated fights to make a reality due to negotiations, but that fight will happen without a doubt. [Erislandy] Lara was there. Lara talked and I faced him and I beat him. When it was [Austin] Trout, he talked and I faced him and I beat him. But they said I would never face him. It’s always like that. The day when I beat Triple G, then they will say someone else’s name. I think the people he has around him changes him. Him talking stupidity and crap; the people around him change him. You don’t need to talk stupidity to make a fight. A fight is made off different things. But it’s okay. I think this way, I can get more anger to make the fight even more interesting. I don’t have any doubt, and when that fight happens, I will win,” said Canelo. 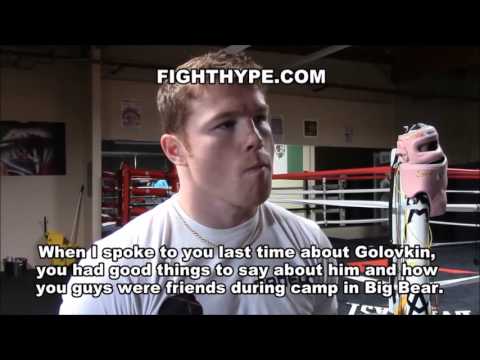 So, Canelo is saying Golovkin is talking stupidly, and Golovkin is saying Canelo is a clown. It sure would be nice if these two fighters would get it over with already and fight each other. Canelo and Golden Boy need to cooperate to get the fight made.

They say it’s never good for a fighter to fight angry. I hope Canelo doesn’t have things twisted in his head that he’ll be able to use anger to beat Golovkin, because he’s going to need to be able to think clearly if he’s going to have a chance of winning that fight.

Boxing is a sport. If Canelo thinks he’s going to go there and knock Golovkin out because he’s angry at being called a clown by him, then he needs someone to tell him to calm down and focus on thinking more clearly. If Canelo goes out there all red-faced with anger when he faces Golovkin in the future, he’s going to get knocked out, because Golovkin is pure business in the ring.

Canelo can talk about him being able to beat Golovkin, but the fact remains, he gave up his World Boxing Council middleweight title to avoid fighting Golovkin. It’s one thing for Canelo to say that he’ll definitely beat Golovkin in the future, but it looks bad that Canelo vacated the belt to avoid fighting him. That move just made Canelo look really bad. Then you’ve also got Canelo fighting welterweight Amir Khan last May and rehydrating to 187lbns, according to Khan.

After beating Khan, Canelo vacates his WBC middleweight title to avoid the Golovkin fight. Canelo’s promoters at Golden Boy Promotions than announce that he’ll be going back down to 154 to fight WBO junior middleweight champion Liam Smith. That was a strange move because Smith isn’t seen as the best fighter at 154 or even third best.

Smith is one of the best, but he’s down on the list possibly as low as No.10. You can argue that Canelo has beaten better junior middleweights than Liam Smith before in Erislandy Lara, Austin Trout and Miguel Cotto. Technically, Cotto was a middleweight when he fought Canelo last November in their catch-weight fight at 155lbs, but Cotto is really a junior middleweight and not a true middleweight.

Golovkin recently said this about Canelo last week to the media:

“I had a lot of respect for him. Right now, it’s just business. He showed his face. He showed strategy of Golden Boy. It’s not respect. He’s just talking. It’s just show. It’s not real. He’s not serious, just commercial, like circus; so many clowns here, just dancing. These are just clowns. I know Canelo is not ready until next year; maybe in five years later,” said Golovkin.

The 34-year-old Golovkin thinks that Canelo wants to wait him out until he gets older before he finally makes the fight with him. Golovkin believes that Canelo just wants to make money off of winnable fights until Golovkin is older in a number of years, and then they’ll make the fight happen. If Golden Boy and Canelo want to wait five years or so before they make the fight, then they may need to drag Golovkin out of retirement, because he’s saying he’ll be retiring in three more years. Golovkin doesn’t want to stick around the sport for a long time past his prime like some fighters do. He wants to finish up when he’s around 37 and head off into retirement. If Canelo hasn’t made the fight with him by then, they’ll have to try and get him to come out of retirement after a couple of years if they still want that fight fight to get made. It wouldn’t be anything new though. Canelo fought James Kirkland with him last year when he hadn’t fought in a year and a half since 2013. Canelo fought Alfredo Angulo when he hadn’t fought in almost an entire year. Canelo has fought some ring rusty fighters before, so it’s quite possible that Golden Boy can lure Golovkin out of retirement if they choose not to fight him before he hangs up his gloves in the next three years.