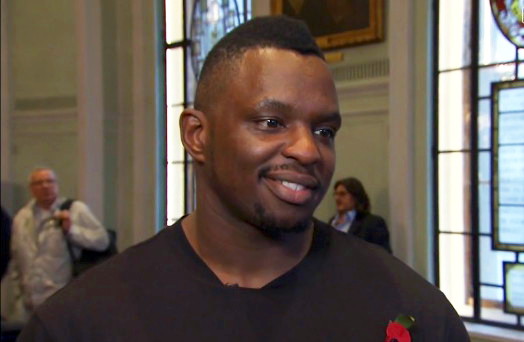 By Scott Gilfoid: British heavyweight Dillian Whyte (17-1, 14 KOs) will be facing unbeaten Dave Allen (9-0-1, 6 KOs) in a 12 round fight for the vacant WBC International heavyweight title this month on July 30 on the undercard of the Josh Warrington vs. Patrick Hyland fight card at the First Direct Arena in Leeds.

“After yesterday’s news it looks like everyone wants to fight – Leeds July 30 just got even better – @DillianWhyte v @davidthewhiter1 is on!” said Whyte’s promoter Eddie Hearn on his Twitter.

Allen defeated journeyman Jason Gavern by a fourth round stoppage last March. The fight was surprisingly competitive from start to finish. I got the impression watching it that if the 39-year-old Gavern was three years younger, he would have beaten Allen. That’s how competitive the fight was. Gavern gave Allen all kinds of problems.

The Gavern that fought Johnathon Banks to a 10 roun draw, and beat James Toney, Darrell Wilson and Manuel Quezada would have beaten Allen without any problems whatsoever. Gavern was a pretty good heavyweight when he was younger. I mean, Gavern wasn’t a contender type, but he was capable of beating the fringe level guys.

“3 weeks’ notice? Chin down bombs away last man standing,” said Allen on his Twitter. “Always said if someone gave me a date and a reason to fight them I won’t shy away from anyone @DillianWhyte see you July 30th be ready.”

This should be an interesting fight for as long as it lasts. I don’t think Allen has the size to beat Whyte. Even a one-armed Whyte might prove to be too good for Allen. If a journeyman like Gavern could give Allan all he could handle, then certainly a one-armed Whyte will probably be able to do the job on him.

Allen, 24, previously said he couldn’t fight Whyte on short notice in taking the fight with just three weeks to train, but he’s now changed his mind. Could it be that Allen saw how bad Whyte looked in his last fight against Ivica Barurin last month on June 25 and figured that this would be the ideal time to fight him? I wouldn’t be surprised if that’s the case, because Whyte was fighting with just his right hand. He rarely used his surgically repaired left shoulder.

This is best time as any to fight Whyte if you’re interested in fighting him. His surgically repaired left shoulder might get stronger in the future, and then he would be a lot more difficult to fight than right now.

Of course, Whyte might stay the same and wind up as a one-armed fighter for the remainder of his career. We’ll know sooner or later whether Whyte will regain the strength and the confidence to use his left arm. From what I saw of Whyte’s fight against Bacurin on June 25, that he’s not able or willing to use his left.

I think Allen should go right after Whyte from the opening bell and look to put it on him in the same way Anthony Joshua did. Allen is a better inside fighter than Whyte, and he might be able to take him out if he keeps the fight in close.

Brook: I’ll show Eubank Jr. how to deal with GGG »