Is Provodnikov finished as a contender? 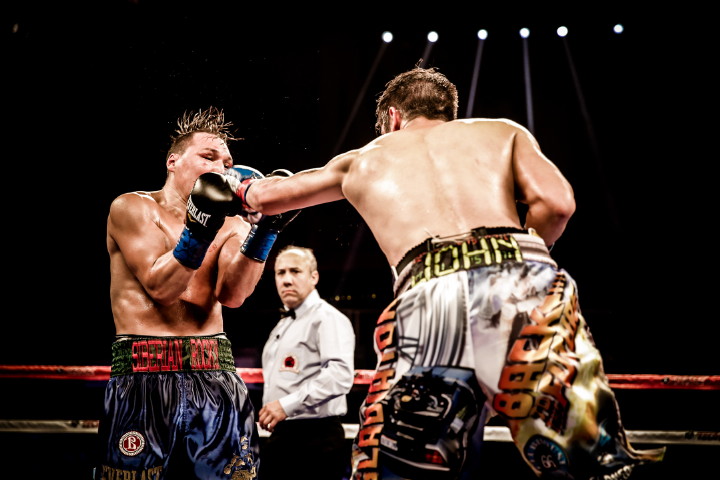 (Photo credit: Amanda Westcott/SHOWTIME) By Jeff Aranow: Last Saturday night, we might have seen the unofficial end of Ruslan Provodnikov (25-4, 18 KOs) as a serious contender with him losing to #8 WBO John Molina Jr. (28-6, 23 KOs) by a 12 round unanimous decision at the Turning Stone Resort in Verona, New York. Provodnikov hasn’t retired yet after the loss, but it might not matter.

The defeat pretty much puts the Russian fighter in a really bad position with his career. For Showtime, they just signed Provodnikov to a contract. Do they keep televising his fights with him losing all the time OR do opt to look for new blood in the slugger line by going for cruiserweight Oleksander Usyk or Murat Gassiev.

The 140lb division is pretty played out right now as far as sluggers go. If Showtime goes with the 33-year-old John Molina, they might be looking at the same thing with him losing each time he’s put in with a halfway decent fighter.

If this was just one defeat for the 32-year-old Provodnikov, then it wouldn’t be such a big deal. But this was Provodnikov’s fourth loss in his last seven fights. You can’t ignore a record of 3-4 in a fighter’s last 7 fights. Provodnikov came into the match with Molina with a ranking of #1 WBC, #2 WBO, #3 WBA. You can bet Provodnikov will be slipping down the rankings now after his latest defeat. Frankly, it’s a surprise that Provodnikov is still ranked as high as he is given that he came into the Molina fight with a 3-3 record in his last six contests. Provodnikov lost by the scores of 116-112, 115-113 and 117-111.

It kind of goes without saying that Provodnikov would likely be badly schooled by 140lb champions Viktor Postol and Terence Crawford. Those would likely wind up being as one-sided as last night’s fight between WBO super featherweight champion Roman “Rocky” Martinez and Vasyl Lomachenko. But if Provodnikov can’t even be counted on to defeat a limited fighter like Molina, then what can Showtime do with him? I don’t see Provodnikov ever competing for a world champion again at 140. He could move up to 147 and try and compete in that weight class, but at 5’6”, I don’t know that Provodnikov has the size to compete against the bigger welterweights in the division. 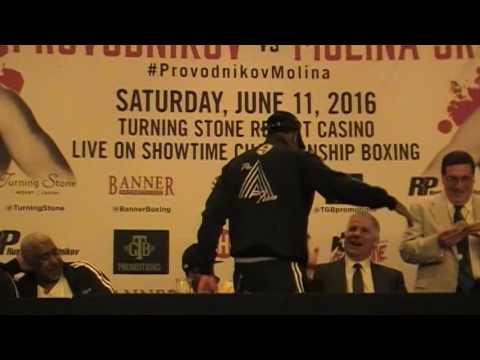 It looked to me like Provodnikov couldn’t hang with Molina even when he was slugging last night. It wasn’t just Molina’s boxing ability that was giving Provodnikov huge headaches. Molina’s power was too much for Provodnikov, and he was especially bothered by his body shots. There was a sequence in the 5th round, when Molina hit Provodnikov with four straight hard body shots that seemed to take a lot of the fight out of him.

It’s possible that the many wars that Provodnikov has been involved with in the past was just too much for him to take another war. Every fighter has a limit of how many wars they can handle before they can no longer fight in that manner any longer. I think the punishment Provodnikov took in his fight against Lucas Matthysse last year in April 2015 might have been the tipping point for him. Since that fight, Provodnikov had fought only once against a poor fighter last November. Molina was Provodnikov’s first against a contender since his punishing match against Matthysse. It could be that Provodnikov had taken one beating too many by the time he fought Molina. I don’t know. I think it’s going to be tough for Provodnikov to come back from this loss to Molina, if he can come back. I don’t think he can.

If Showtime is going to televise Provodnikov’s next fight on their network, then they need to have him matched against a sure thing slugger that won’t pull any tricks by looking to box him. But even if Provodnikov is matched against a limited slugger, I don’t know that he can be counted on to win. If he can’t beat a guy like Molina, then who can he beat at this point in his career?

Lomachenko: The next Mayweather? »