Errol Spence has special news to reveal on Saturday 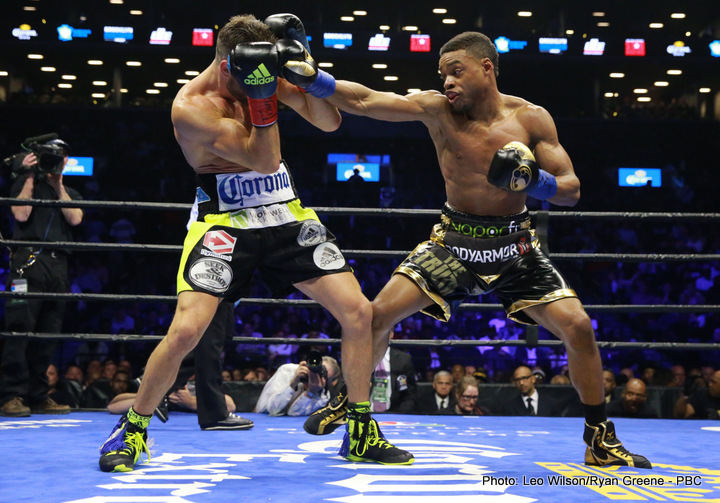 By Allan Fox: Undefeated #2 IBF welterweight champion Errol Spence Jr. (20-0, 17 KOs) says he’ll be making a news announcement this Saturday during the Andrzej Fonfara vs. Joe Smith Jr. telecast at the UIC Arena in Chicago, Illinois. Spence, 26, will be working the Fonfara-Smith fight as a commentator on the Premier Boxing Champions telecast on NBC.

It’s possible that Spence could have some information about his IBF ordered eliminator bout against Leonard Bundu (33-1-2, 12 KOs). Spence and Bundu are supposed to fight each other this summer.

The winner of the bout will be locked in IBF welterweight champion Kell Brook’s mandatory. That doesn’t mean that the Spence-Bundu winner will get a shot at Brook, because the British fighter’s promoter Eddie Hearn has already said that he’ll be moving up in weight in 2017 to campaign at junior middleweight.

“In Chicago calling the #PBConNBC fights tomorrow night … Also might have some fight news of my own for yall … #MrNBC #MANDOWN,” said Spence on his Twitter.

Ideally, it would be great if Spence could get a better opponent for his next fight instead of the 41-year-old Bundu to fight. but this appears to be the only guy that was willing and/or physically able to take the fight. Spence was supposed to fight #3 IBF Konstantin Ponomarev in the IBF eliminator bout, but he suffered an injury and couldn’t take the fight.
Bundu gave Keith Thurman a lot of problems in their fight two years ago in December 2014.

Thurman won the fight by a 12 round decision, but he spent much of the contest moving around the ring in wide circles. The fans booed frequently because they wanted to see action and instead were forced to watch Thurman running from a smaller and much older fighter. Bundu has won his last two fights against Pablo Mangui and Jussi Kovula.

Spence defeated former WBO light welterweight champion Chris Algieri by a 5th round knockout last April at the Barclays Center in Brooklyn. It was a pure demolition job by Spence in that fight in taking care of Algieri like no one had ever done before. Algieri wasn’t even beaten like that in his fight against Manny Pacquiao in 2014. Pacquiao knocked Algieri down six times, but he wasn’t able to keep him down like Spence.

Spence wants to fight Thurman and Brook as soon as possible, but these fighters aren’t showing a great deal of interest in fighting him. It would be interesting to see how long it takes for Spence to eventually fight one of them.


« Will Canelo fight Liam Smith or Lemieux in September?