Wladimir Klitschko vs. Tyson Fury 2 on July 9 in Manchester, UK 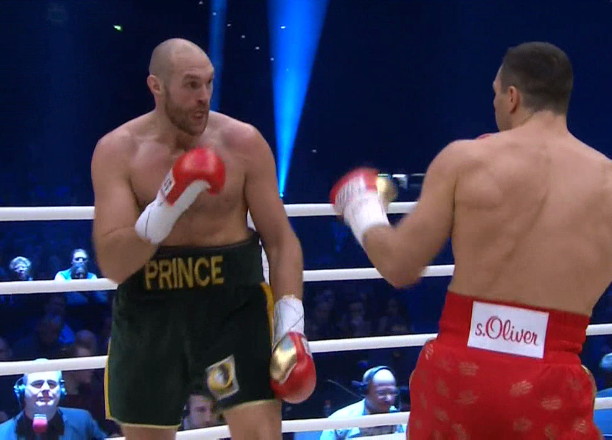 By Scott Gilfoid: The long awaited rematch between the aging 40-year-old Wladimir Klitschko (64-4, 53 KOs) and IBO/WBA/WBO heavyweight champion Tyson Fury (25-0, 18 KOs) will be taking place on July 9 in Manchester, UK, according to Fury’s trainer Peter Fury.

The fight is expected to be announced. The negotiations for the rematch took forever, and there were thoughts that Fury might move on to fight the winner of the Anthony Joshua vs. Charles Martin clash. Luckily for the fans, the Klitschko-Fury rematch will be taking place.
Klitschko will be trying to avenge his 12 round decision loss to Fury from last November.

That was a close fight with neither fighter doing much of anything. Wladimir looked too scared and confused to throw punches, whereas Fury was just ineffective on offense. Fury’s slapping shots were easily picked off by the more skilled Wladimir.

In looking at that fight, what jumps out at you is how easily winnable it would have been for Wladimir if he had simply thrown punches instead of looking like he didn’t have a clue. Wladimir couldn’t land his jab or his left hook, but he was able to land his rights no problem. Instead of forgetting about his jab and left hook and focusing just on his right, Wladimir spent the whole time waiting for the perfect time to throw his right.

It was really painful to watch how locked up mentally Wladimir was. Had that been Deontay Wilder in the ring instead of Wladimir, Deontay would have a clue and realized early on that he needed to throw right hands. The result would have likely been Fury being poleaxed in the 1st or 2nd round. Believe me, it wouldn’t have taken Wilder 12 rounds to figure out that he needed to throw right hands to win. Wilder doesn’t looked up mentally like we saw with Wladimir.

The fact that they’re looking to stage the rematch in Manchester isn’t a good sign because Fury might not be able to pull in the fans. I mean, he still hasn’t shown himself to be a big gate attraction like former super middleweight champion Carl Froch. I’m not sure why that is, but it might have to do with Fury’s lack of punching power. It’s no secret that the British boxing public likes to see impressive knockouts. They don’t like to see heavyweights run around the ring, throwing slapping backhands, and clowning 24/7.

I see this fight as having only one outcome and that’s with Wladimir knocking Fury out with a hard right hand to the head. I know Fury has been yapping about wanting to fight Joshua if he gets past Martin this Saturday night, but believe, the only way Joshua and Fury wind up facing each other next is if one or both of them have a loss on their records. I do not see Fury besting Klitschko, because the Ukrainian fighter has had months and months to absorb what he did wrong the last time he was in the ring with the 6’9″ Fury. If Wladimir hasn’t had enough time to understand what he did wrong and what he needs to do on July 9, then I don’t know else there is for him.

Wladimir will need to retire if he can’t come to terms with what he did wrong against Fury, because a child could see what mistakes Wladimir made. It’s clear as day that Wladimir will not be able to land his jabs or left hooks against Fury, because the British fighter will be leaning backwards all the time to avoid them. Wladimir must unload right hands, and he must be ready to reload on that punch if he misses with it.

Wladimir falls forward when throwing his right. When he misses, he ends up in close with Fury and generally clinches him at that point. That’s a stupid thing to do. Wladimir needs to watch Deontay Wilder’s fights to learn what to do when he misses one of his right hands. When Deontay misses with his right, he then throws a short right hand while in close and follows up with short left hooks. You won’t see Deontay looking to hold and have the referee break them and reset the distance. Deontay just keeps fighting when he’s in close, and that’s what Wladimir needs to do.

« Pacquiao-Bradley 3: Is it insane to fight again?

Anthony Joshua could be next in line for Tyson Fury »