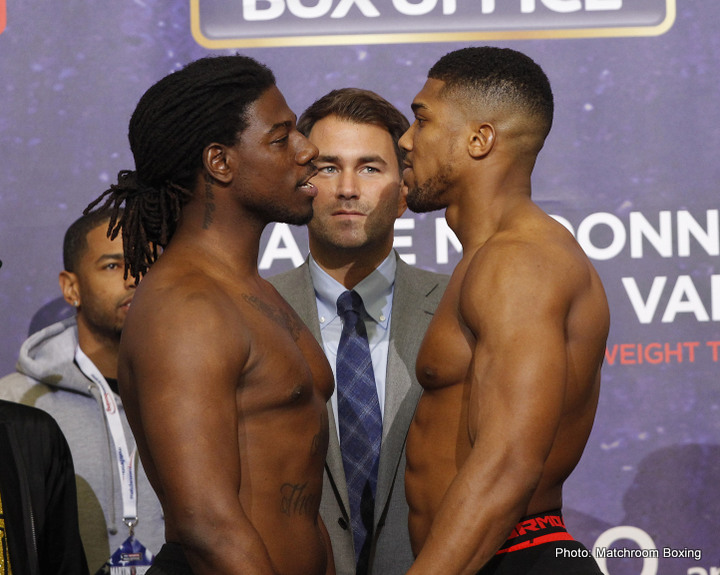 By Scott Gilfoid: By Edmond Stucey: IBF heavyweight champion Charles Martin (23-0-1, 21 KOs) weighed in slightly more than the heavily muscled challenger Anthony Joshua (15-0, 15 KOs) on Friday in coming in at 245 pounds at the weigh-in for their fight on Saturday night at the O2 Arena in London, England.

Joshua weighed in one pound less than Martin at 244lbs. Both fighters looked identical in size. The only difference between them was Joshua’s bodybuilding physique he was sporting. Joshua, 6’6”, looked like he had trained for a bodybuilding physique rather than a championship boxing match.

You can only hope that he can fight better than he looks because he doesn’t resemble too many other top fighters in different weight classes. The top fighters usually don’t pack on bodybuilding muscles because they don’t in fights that go beyond four rounds.

The heavily muscled fighters are usually only good for the early rounds of the fights. After that, their muscles tend to slow them down, causing them to get tired and battered by their less muscled counterparts.

Martin had a toothpick in his mouth during the faceoff, and he looked totally cool, calm and collective. It was just like watching one of his fights. He was so calm. Nothing bothers that guy at all. In contrast, Joshua looked absolutely tense, like he was ready to jump out of his boots, especially during the face off.

Joshua had a slight grin on his face, but it looked totally false. The grin couldn’t cover up the nervous energy that Joshua was showing. He looked intimidates, to be sure. Staring at someone that could look him straight in the eye without looking up to him seemed to have Joshua unnerved. Up until now, Joshua has been matched up against a lot of short, old guys by his promoter Eddie Hearn. The promoter has matched Joshua with care like a mother hen looking out for her offspring.

On Saturday night, Hearn will need to let Joshua step out the door into the wild wilderness of the boxing world. If he can’t handle it, then he’s going to get taken apart on his first day out of the henhouse on Saturday. I can’t say I’ll be surprised if Joshua does get obliterated, because I think his entire preparation for this fight has been totally backwards. Further, Joshua’s 15-fight career has been done wrong. He should have been facing better opposition ages ago instead of being coddled by Hearn with 15 wasted fights.

Joshua should have been told to lose the muscle a long time ago as well. If they had keep Joshua in the low 220s in terms of his weight, he would be so much better than he is now. At 245, Joshua is so slow that it makes him easy target. He can’t generate any explosive power on his shots, and he’s forced to throw a lot of arm punches due to his upper body being so tight due to all the muscles he has. He’s not like Mike Tyson, who was able to generate a lot of hand speed despite being heavily muscled. Joshua is more musclebound, and not someone that carries muscle well. 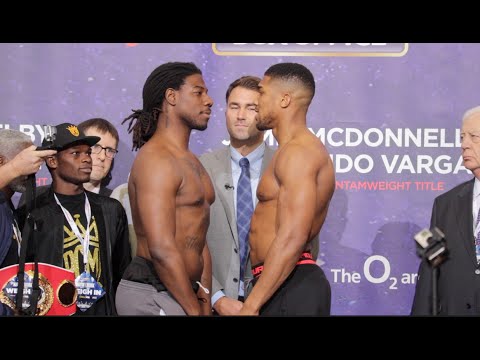 “Yeah, 110 percent,” Joshua said to skysports.com when asked if the fight will end with a KO. Joshua appears to think he’s going to be the one getting the knockout. “I asked how he was feeling. Camp’s over. Let’s put on a good show. I was just spurring him on for a good show on Saturday night. It’s a pleasure to be bringing big-time boxing back to the UK. There are a few butterflies of course. I’ll just rest tonight and perform, then chat to you guys after and hopefully I’ll have the win. I see myself coming out and outclassing him.”

You generally have to prove yourself against the best over many years before you can become a PPV star. Even then, you’re not going to become a PPV star unless you have personality and the type of fighting style that the U.S public likes. I mean, you’re not going to see fighters already having their fights sold on PPV after just 15 fights like you do in the UK with Joshua’s fights now being peddled by his promoter Eddie Hearn on PPV for the British boxing public’s consumption. A move like that by Hearn in the U.S would be a fail, a major fail. Joshua’s fights would be lucky to bring in a few thousand PPV buys in the U.S if he were having his fights sold there.

Like I said, it takes time, and you’ve got to actually prove yourself against the best to get to the PPV status in America. You’re not going to become a PPV attraction beating these type of fighters: Jason Gavern, Matt Skelton, Michael Sprott, Raphael Zumbano Love. Gary Cornish, Denis Bakhtov, Kevin Johnson, Konstantin Airich, matt leg, Hector Alfredo Avila and Dorian Darch. I’m just saying. Those are the guys that Joshua has fought in the UK, and now his fights are on PPV. It’s hard to understand, but to each his own.

“That’s my belt, I just won it and I ain’t done having fun with it,” said Martin via skysports.com. “We’re all ready to get up in his head tomorrow. It’s the heart of this man here, that’s what is going to win this fight. You can train all you want – that’s just conditioning and doesn’t win fights. Conditioning is a recipe but it’s the heart [that wins fights].”

Martin is correct about conditioning winning fights. He’s someone that has great stamina in his fights. One of the reason for this is he doesn’t carry around useless bodybuilding muscles that serve no purpose other than to impress people on the beach. Additionally, Martin is very calm in his fights. If you look at Martin fight, it’s like someone taking a casual stroll in the park. He looks like he doesn’t have a care in the world. I bet if I were to take Martin’s pulse, it would register only 80 beats per minute. The guy is totally calm. That’s going to obviously help him on Saturday night once the fight goes past the 4th round. When Joshua is gassing out, Martin will still be running smoothly with his low pulse rate, his thinking mind, and his total control over what’s taking place in the ring.

You can bet that Martin will make Joshua pay for all the mistakes he makes in the ring on Saturday night. This means that if Joshua falls back into his bad habit of bum rushing Martin, he’s going to walk into a big left hand to the head that is going to snap him back to reality, and force him to think of some other things to do in the ring. If Joshua is hard-headed and unable to adapt, thjen he’s going to get blasted into oblivion on a real hurry. Martin is a pure counter puncher, and he’s able to make his opponents pay when they try and bum rush him in a primitive caveman style.

What’s interesting is that many of Martin’s opponents have shown more technical skills than Joshua. They haven’t mindlessly rushes him like we’ve seen with Joshua in his fights. At the pro level, you don’t last long when you fight in an amateurush way like Joshua has been fighting since he turned pro. Pros don’t fight like that. Joshua will either learn to fight like a pro or he’ll wind up being turned into a gatekeeper type fighter.

« Videos: Martin vs. Joshua Weigh-In – Briggs/Haye Go At It!