Bradley looks improved under Atlas, not enough against Pacquiao 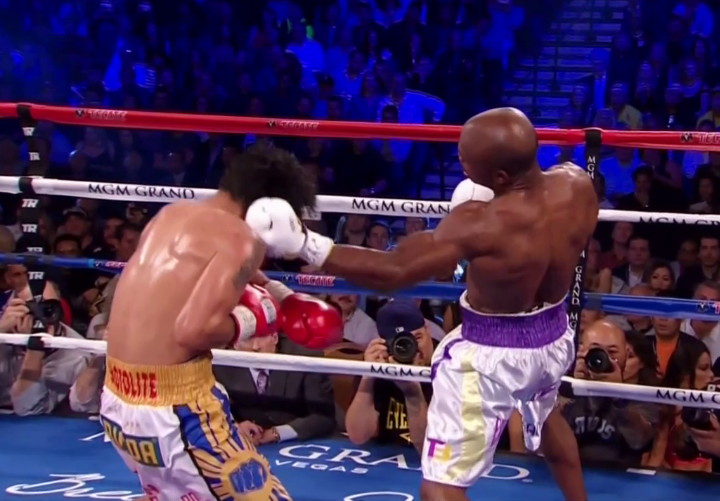 By Godfrey Falcon: Timothy Bradley (33-2-1, 13 KOs) entered the ring last Saturday at the MGM Grand in Las Vegas, Nevada for his second fight under trainer Teddy Atlas. After a sensational performance against Brandon Rios in his prior bout last November, two fights against Manny Pacquiao (58-6-2, 38 KOs), and the typical mental steel he enters the ring with, he had every tool necessary at his disposal to defeat the Filipino phenomenon.

Bradley looked good, and he looked smart, jabbing frequently to keep Manny wary of rushing in and taking advantage of Manny’s mistakes. This Tim Bradley did look like the best Tim Bradley that Manny had ever gone up against, worthy of his inclusion in the Top 10 Pound-for-Pound Boxers of today status. But sadly, and even unexpectedly, it was not enough.

Bradley’s previous 24 rounds of experience against Pacquiao afforded him all the knowledge he needed about the veteran’s strengths and weaknesses. Manny was prone to rushing in wildly with the straight left. Manny does not always bank left or right, but backs up when not always necessary, even into the ropes. Tim was able to capitalize on this in their third fight by getting moving Manny toward the ropes, then tagging him as he did in his best round, the 8th. Here, Manny was close to the ropes and was caught by three sequential left hooks by Bradley while backing up into the ropes. He had Manny hurt and uncomfortable. It was just the break Tim needed to stay in the fight, and he was looking for those opportunities all night. He was landing on Manny with his own straight right hand as well as an occasional uppercut as Manny rushed in. Tim was game, and Atlas really did work on him. It wasn’t just an out of shape Rios that made Tim look the way he did against him. It was a smarter and more versatile Timothy Bradley, with more experience and even power than before. And this is the Timothy Bradley I expected to defeat Pacquiao in this third bout. I predicted him to win a close Unanimous Decision, with scores of either 116 to 112 or 115 to 113. Boy was I wrong.

Despite his loss to Floyd Mayweather Jr. last May, his right shoulder surgery, age of 37, and questions about whether or not he still had the will of a fighter in him, Pacquiao surprisingly outsmarted and outfought a game Timothy Bradley, winning a clear Unanimous Decision with all three judges scoring the fight 116 to 110 in his favor. Some, including myself, see this as Pacquiao’s most decisive victory against Bradley yet. In an unexpected development, he even knocked down the sturdy Californian twice, something he has never been able to accomplish in 24 rounds against him. The first knockdown was flash, but legitimate, as Tim got tagged by a left hook from an awkward angle he wasn’t able to see just before going down. He may not have been hurt, but he wouldn’t have gone down if not for the punch. The second knockdown was a phenomenal piece of a fighter’s instinct: the instinct to hit the target no matter what. After missing with a straight left that Tim saw a mile away, Manny did a quick and immediate left hook, which again, Tim did not see coming, and landed flush on his face with enough authority to send him on his back. The power behind that left hand, even with only a few inches separating point A to point B is still something amazing to behold. And the tacticians mind and sharp reflexes behind it, only someone like Pacquiao can have.

You could see the sad frustration in Timothy Bradley’s face. He knew where he could catch Pacquaio. But after repeatedly eating those lightning fast straight lefts, his will to engage was dampened. To hurt Pacquiao, he had to take chances, and Pacuqiao is one of the most dangerous guys to take chances against. Why? Because he will catch you, and he will drop you. He simply did not want to take the risk of getting dropped again. Maybe even getting knocked out. I really like Tim Bradley, and I want him to succeed. I want him to keep fighting the best, and beating the best. I have a feeling he’s going to stick around the top 10 pound-for-pound list for years to come. I can see him against Khan, Brook, Thurman, and Garcia. If Algieri can hurt Khan, Bradley can hurt Khan. I see him out landing and taking the punches of Thurman and Brook. I even think he’s got quicker feet and faster hands than both of them. As for Garcia, if Peterson could give Garcia a hard time, Bradley (who defeated Peterson) can give Garcia a hard time. He’s got that ability to give any fighter, no matter how skilled or how powerful a hard time, and win. Any fighter barring one. How hurtful it must have been, after three competitive fights, to realize that despite being one of the best, no lies, no excuses, no beating around the bush, Pacquiao is just better. To fight a guy like Tim, a top 10 pound-for-pound fighter with the skill set that he has, and win convincingly in the final fight of your career, that’s a fighter. No, that’s a great fighter.

Yes, this Pacquiao looked a lot better than the version who lost to Mayweather. Floyd is good at taking fighters out of their A game, the way Pacquaio did against Bradley. But was this because Floyd was a better fighter than Bradley, was Manny not at his best, or was it a combination of both? We will assume we know the answer, but we can never truthfully be certain. I for one believe a rematch would result in a win for Floyd, simply because Floyd is that kind of fighter who is such a fast learner that any time he spends in the ring with someone, he can adjust very quickly according to their strengths and weaknesses. He may not have the same power as Manny, but his reflexes, ring intelligence, and skill set have been shown to be better.

My biggest surprise was that Pacquiao was able to do the same for Bradley. He actually learned more from his past two fights against him, something I thought Bradley would have an edge on: that adaptability. Perhaps even he learned and adapted from his mistakes in the Mayweather fight? Perhaps he can learn and adapt to Floyd better than Floyd can adapt to him in a rematch? My prediction that he would lose again to Floyd could end up being just as wrong as my prediction that he would lose to Bradley. In any case, Pacquiao is leaving the sport no longer the one dimensional brawler he once was, but a more complete and adaptable fighter. He’s far better and smarter than his haters and detractors take him to be, and even better than I thought him to be. After 21 years, an all-time great, the Fighting Pride of the Philippines, retires from the sport. And he went out in style.