Sergey Kovalev: I don’t know if I can beat Andre Ward 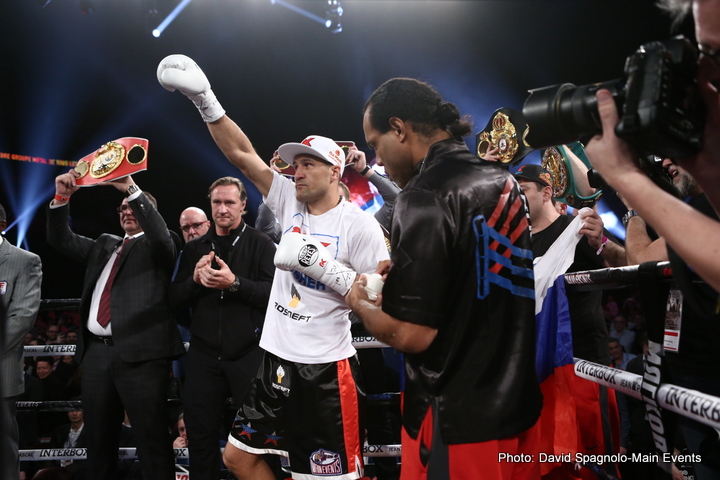 By Jeff Aranow: Undefeated IBF/WBA/WBO light heavyweight champion Sergey “Krusher” Kovalev (29-0-1, 26 KOs) is getting ready for his next fight in the summer. His management are looking at June 18 or June 25 as potential dates for his fight, which will be a warmup fight to get him ready for a big pay-per-view fight later this year in November on HBO against unbeaten former super middleweight world champion Andre Ward (29-0, 15 KOs).

Kovalev, says, 33, says he’s not sure if he can beat the Oakland native Ward, but he wants to find out if he can.

“I don’t know if I can beat him. But I want to fight him. It’s a huge test for me,” said Kovalev to the latimes.com about Ward.

There are a lot of people who believe that Ward has too many skills for Kovalev to handle him. Ward has two fights under his belt in the light heavyweight division, but he hasn’t dealt with anyone with nearly the same kind of punching power as Kovalev. At the same time, Ward doesn’t look like he carried what little power he had at 168 up to 175. Ward now looks even weaker than he did when he was fighting at super middleweight. This means that Ward’s only chance of beating Kovalev is to try and out-box him.

Kovalev is seen as the fighter to beat at 175, even though he still hasn’t faced WBC light heavyweight champion Adonis Stevenson. That’s someone that many boxing fans feel would beat Kovalev, but unfortunately the two have never been able to line up a fight against each other due to them fighting on different networks.

Kovalev’s fight against Ward will prove who the best fighter is in the 175lb division in the minds of some fans. But until the winner of that fight faces Stevenson, they won’t be seen as the best fighter in the division by all fans. Kovalev has the size, power and the aggressive fighting style to give Ward all he could handle. It might be too much power for Ward, who looked mostly defensive in his last fight against Sullivan Barrera last March. Ward won the fight by a 12 round decision, but he didn’t look all that powerful.

Ward is expected to take a summer fight as well to get him ready for Kovalev. Ward specifically wanted the tune-up fight to help sharpen up for the bigger Kovalev. It’s a risky thing though because if Ward faces someone too good, he could get beaten. There are some contenders in the light heavyweight division like Artur Beterbiev who might prove to be too much for Ward to handle if he makes the mistake of facing him in his next fight.

It would be good for the boxing fans to see if Ward has the talent to beat one of the very best contenders in the division to earn a shot at Kovalev, but the reality is that Ward could lose if he faces someone really good instead of facing another hand-picked slow guy like he’s done in his last two fights against Sullivan Barrera and Paul Smith.

« Mayweather thought Pacquiao-Bradley 3 was a draw

Haskins vs. Morales on May 14 / Undercard Update »