By Dan Ambrose: Trainer Freddie Roach says he thinks Manny Pacquiao (57-6-2, 38 KOs) will out-box Saul “Canelo” Alvarez if that fight takes place. Roach says that Pacquiao has always done well against bigger fighters, and he thinks that Pacquiao could do the job on Canelo as well with his speed.

It’s unknown at this point if Pacquiao will continue his pro career beyond his fight this Saturday night against Tim Bradley (33-1-1, 13 KOs) at the MGM Grand in Las Vegas, Nevada. If Pacquiao does continue fighting, then Canelo is definitely a possibility for him.

When Roach was speaking about Canelo, Pacquiao seemed to take a lot of interest in what he was saying. Moments before, Roach was talking about being interested in having Pacquiao fight Terence Crawford, and Pacquiao’s facial expressions didn’t show a lot of eagerness for that fight. You can understand why because it would be a fight that would make nowhere near the same kind of money that a Pacquiao-Canelo fight would make. Pacquiao wouldn’t get a lot of credit for beating Crawford compared to if he were to beat the much heavier Canelo.

“Canelo, we’re thinking about it. I know he’s big. Manny has always done well with big guys,” Roach said about a potential Pacquiao vs. Canelo fight. “I think Manny can out-box Canelo. He’s a difficult fight, I know. I think if we get a look at Amir Khan in how that goes, we’ll have a better idea. Amir is like Manny, very athletic and very fast. It looks like he put on a lot of muscle,” said Roach in speaking about Khan.

Canelo would be so much bigger than Pacquiao. This is a fight that would have the potential of Pacquiao getting knocked cold if he got caught by one of Canelo’s big shots. It’s not that Canelo has one-punch power for a middleweight, but he would be facing a smaller pumped up welterweight if he took that fight. Pacquiao isn’t accustomed to getting hit by fighters that weigh nearly 180lbs like Canelo. That would be a new experience for Pacquiao, and he might not be ready for it. However, the money that Pacquiao makes in the fight might be enough for him to ignore the danger involved.

If Khan does too well against Canelo, then there won’t be any point in Pacquiao fighting Canelo. He’ll be seen as flawed and beatable if Khan does well against him. Even if Khan still loses the fight to Canelo, if he can make it a struggle for the Mexican fighter, then that’s going to cause Canelo’s stock to drop. It won’t be worth it for Pacquiao to fight Canelo if that happens because the fight won’t be nearly as big.

“It’s hard to say right now if I will fight again,” said Pacquiao about whether he’d retire or not. “I haven’t been there (being retired). I don’t know the feeling when you get there. When your passion is boxing, you have to experience it first before you can comment. I rested for almost one year. When I came back to training, I felt fresh and new, and I felt excited for training.”

Pacquiao is running for a seat in the senate in the Philippines in the May elections. If Pacquiao wins the position, then he’ll need to start working at that job beginning in July. Pacquiao isn’t sure what things will be like when/if he takes office. He might not have enough time to continue his boxing career because he’ll be “helping the people.” 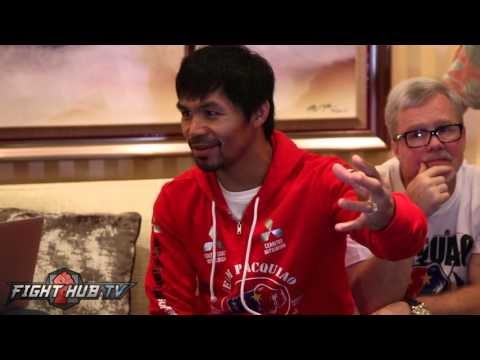 “He [Pacquiao] hasn’t slowed down at all. He still has a couple of fights in him,” said Roach about Pacquiao. “His workouts are great. We do have an agreement that if he starts to look shot, I’ll tell him, but I don’t see that yet. We’ve had a great training camp, and he’s in as great a shape as I’ve ever seen.”

If Pacquiao does come back for a fight against Canelo, it would be a huge fight if the two of them win their next fights. Pacquiao has the harder job of beating a motivated Bradley, because this is going to be a much different fight than their previous two encounters.

Bradley’s new trainer Teddy Atlas is going to have him focusing more on using movement and his boxing skills, and less on him slugging it out with Pacquiao. This means that Pacquiao will need to cut off the ring on Bradley to force him to brawl. That’s not going to be easy because Pacquiao will leave himself open when he tries to push the fight.

« Will Mayweather come back?

Hearn: Don’t rule out Fury vs. Joshua in the summer »