Hearn: Don’t rule out Fury vs. Joshua in the summer 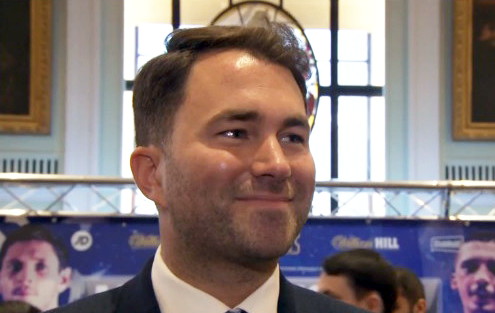 By Scott Gilfoid: Anthony Joshua’s promoter Eddie Hearn is hoping to setup a fight between Joshua and IBO/WBA/WBO heavyweight champion Tyson Fury next if Joshua wins his fight this Saturday night against IBF heavyweight champion Charles Martin. Hearn is ready to start negotiations immediately with Fury if Joshua wins the fight, because it’s starting to look like a rematch between Fury and Wladimir Klitschko might not take place.

Hearn says that Fury looks like a fat boy compared to the heavily muscled Joshua. However, I’m not sure that Hearn realizes that muscular fighters frequently get beaten by fighters that have a fair amount of fat on them.

In other words, having a lot of muscles works against you in the sport of boxing. Now if this was something wrestling or American football, then Joshua would have a clear advantage over someone like Fury, but it’s not. Joshua looks like a dedicated weight lifter to me, and not like a serious athlete.

“I think compared to Anthony Joshua, he’s a fat boy… but who isn’t? I think Anthony is a serious athlete and they’re two very different characters,” said Hearn to skysports.com.

Hearn thinks Fury isn’t a serious athlete because he’s not pumping iron like Joshua. I don’t agree that Fury isn’t serious about his craft. I think Fury has his priorities clear. He’s more focused on old school boxing training and less on working out with resistance exercises like we see with Joshua. The problem with working out on weights or other exercises that involve resistance is that they cause you to add muscle weight, become bulky and slow, and this puts a strain on your cardiovascular system because your heart has to pump blood to all those muscles. Weights are fine in moderation, but when you start bulking up 20 to 30 pounds in a short period of time, then that’s clearly not helpful.

“I don’t expect that to be Fury but you never know in this game – maybe the Wladimir Klitschko fight falls through. It’s taken long enough. The last fight was in November and we’re now in April. There’s no concrete date so don’t rule out Fury against AJ in the summer,” said Hearn.

I wouldn’t hold my breath waiting for Fury vs. Joshua fight to take place in the summer. I think Fury will ultimately wind up facing Klitschlko in a rematch at some point this year, maybe in November or December. Yeah, it’ll cost Fury in losing most of the year in not fighting, but what can you do? Fury was the one that made the major blunder in agreeing to a rematch clause with Klitschko in the first place when he didn’t have to.

Fury was Wladimir’s WBO mandatory challenger, so he didn’t have to sign a rematch clause in order to get the fight against him last November. Fury just made a mistake in signing that agreement because if he didn’t sign it he could be moving on and fighting Joshua or whoever. Of course, it doesn’t make sense for Fury to be fighting Joshua if he loses his fight this Saturday night against Charles Martin.

“The mandatory would be called towards the end of November so we can fight who we want up until the end of November,” said Hearn in assuming that Joshua wins his fight against Martin on Saturday night. “Tyson’s been very vocal in believing Charles Martin will win the fight and also downplaying Anthony’s quality and ability. The prospect of Fury against Joshua is wonderful.”

If Joshua wins on Saturday night, then he’ll need to face the winner of the Carlos Takam vs. Joseph Parker fight. Those two heavyweights will be fighting an IBF eliminator on May 21. That’ll be a very tough fight for Joshua because those guys are big and they both can punch. If Joshua tries to run them down like he’s been doing against the C-level fighters that Hearn has been putting in with him, he could very well get knocked out. Both of those guys have better hand speed than Joshua, and punch with more force and power. 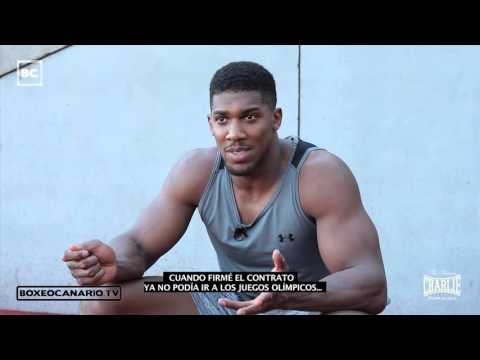 Joshua just doesn’t throw his shots with enough speed for him to generate a lot of power on his shots. Instead of wasting time bulking up constantly, Joshua should be focusing on working on his hand speed or lack thereof. If you look at talented heavyweights like Deontay Wilder, one of the key ingredients that makes him so powerful is his hand speed and his lean physique. Deontay weights little more than 229lbs at 6’7”. He doesn’t need to put on a ton of muscles to try and punch hard because he does it with his tall frame and fast hand speed. You’d never seen Deontay try and bulk up to 250 like Joshua because it’s just not worth it.

I’ll be very surprised if Joshua wins on Saturday night against Martin because he’s giving away so much in terms of hand speed and athleticism. If you had the chance to see Martin workout recently, he was so much faster than Joshua that it wasn’t even funny. There was a huge difference in speed and athleticism.

Hearn is also talking about wanting to setup a rematch between Joshua and Dillian Whyte because of the interest their fight created last December. Joshua scored a 7th round knockout over Whyte, but there were some shaky moments for Joshua in the 2nd round when he was staggered by a left hook from Whyte. The fight brought in a lot of pay-per-view buys on Sky Box Office, which is why Hearn is interested in putting the two heavyweights back inside the ring together. I’m not sure where David Haye figures into Joshua’s plans.

It looks like Hearn isn’t interested in making that fight happen yet. He could be waiting for Haye to start fighting talented opposition from the 1st tier instead of fringe level guys or 2nd tier unknowns like his current opponent for May 21 Arnold Gjergjaj. That mismatch really surprised me because Haye had the perfect opportunity to fight a named guy in Shannon Briggs. The fact that Haye decided to fight little known Arnold Gjergjaj suggests that there’s some worry on Haye’s part. You don’t fight an unknown like that if you’re confident in your ability to fight the better heavyweights in the division. I rate Briggs as a much better fighter than Gjergjaj, and I think it’s so sad that Haye has chosen to face a guy like this instead of someone that boxing fans can recognize.

Instead of thinking ahead of fights he wants to match Joshua up against in the summer, Hearn needs to pray that Joshua wins his fight this Saturday night against Martin, because I believe he’s going to lose to the hard hitting southpaw American.