Martin: Joshua is going to get tired and I’m going to KO him 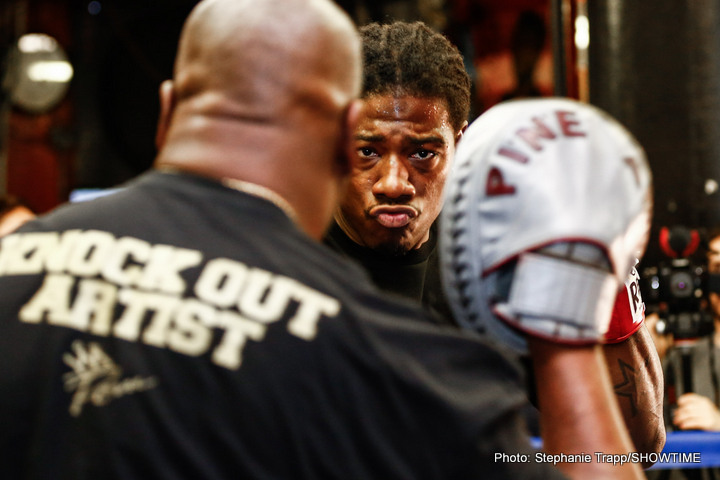 By Scott Gilfoid: IBF heavyweight champion Charles Martin (23-0-1, 21 KOs) thinks boxing fans are making a major mistake in thinking that the inexperienced and unproven Anthony Joshua (15-0, 15 KOs) is a superstar already after just three years as a pro. Both Joshua and Martin are unproven fighters at this point. The winner of the contest will be the guy with the most brains.

Martin plans on exposing the green 26-year-old Joshua when the two of them face each other this Saturday night at the O2 Arena in London, England. Martin has seen Joshua’s past fights, and he’s noticed how the 6’6”, heavily muscled Joshua starts to breath heavy when he’s pushed at a fast pace, and when he has to go rounds.

Martin thinks Joshua is too bulked up from weight lifting, and he thinks the British fighter is counting and hoping that their fight only goes a few rounds. Martin says he’s going to take Joshua deep into the fight and make him gas out on Saturday night. At that point, Martin will look to put Joshua out of his misery by knocking him out in front of his own fans.

“Everybody thinks that he’s a superstar,” said Martin via fightnews.com. “I know that he’s green. I know he’s not ready. I’m going to get him right now while he’s green…take him out.”
Of course, Joshua is green. The guy has only 15 fights, and one of those fights was against a quality fighter in Dillian Whyte, who Joshua beat by a 7th round knockout last December. Martin is green too, which is what makes this fight so interesting.

Whyte suffered a shoulder injury in the 2nd round after hurting Joshua. It was a stroke of luck for Joshua, because how does your opponent suffer a serious shoulder injury in the same round that they just badly hurt you? That was like an early Christmas present for Joshua, because without Whyte suffering a shoulder injury, which he says he had before the fight, we likely would have seen Joshua get knocked out. I’m just saying. Joshua probably should be 14-1 right now rather than 15-0 if Whyte doesn’t get hurt.

Never felt so good on a Tuesday 🌞 Time to boss up! 👊🏾 #AJBoxing pic.twitter.com/sMGwPKNycr

Martin just needs to make sure that he doesn’t start playing Joshua’s game by standing and trading in the first five rounds. Martin will obviously need to fight hard enough to wear Joshua down, but he probably shouldn’t do it right off the bat unless Joshua forces the issue. In that case, Martin will need to count on landing his left hand bombs to Joshua’s weak right side. 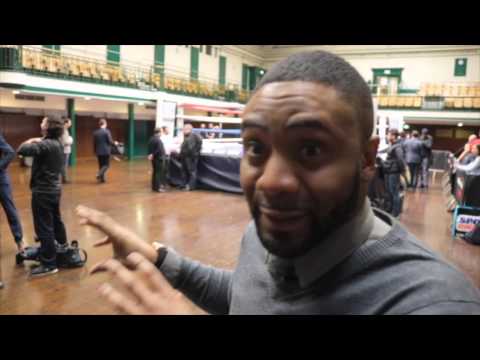 As Dillian Whyte pointed out recently, Joshua is horrible in defending his right side. That’s where Martin’s left hands will be going, and we could see a quick knockout if Joshua fights thoughtlessly. I mean, I wouldn’t be surprised if Joshua gets flattened in the first two rounds because he’s absolutely no preparation for this fight in terms of facing talented southpaws with major size, power and dare I say talent.

Joshua has been fighting fodder level opposition in record padding fights. It’s obviously been a calculated move on the part of Joshua’s wily promoter Eddie Hearn to have him fight a bunch of awful opponents since he turned pro three years ago. By putting Joshua in against 3rd tier opposition, Hearn has succeeded in giving him a gleaming record while at the same time making his fans believe that he’s the best thing since sliced bread.

The thing is it’s had a negative impact on Joshua him fighting weak opponents, because he’s now at the point where he believes his own hype. I guess Joshua is too young to get a clue about the type of opposition Hearn has been feeding him. Instead of Joshua putting Hearn’s feet to the fire 10 fights ago to push him to stop feeding lower level old timers, Joshua just let Hearn continue to match him up against those level fighters.

When you hear Joshua talk about himself now, he comes across like he’s unbeatable, and walking on water. It’s actually kind of funny for me because it shows me that Joshua fully believes he can beat the talented heavyweights in the division as easily as he’s beaten the 3rd tier guys that Hearn has been feeding him over and over again. We see this in some of the comments that Joshua has been making lately in saying that Martin just another fight for him, and that he’s not even the toughest guy he’s faced. 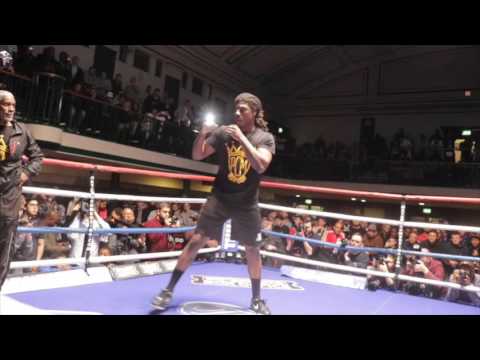 Joshua kind of reminds me of my little brother. I would let him beat me in checkers because I didn’t just want to trounce him. But after a while, he was acting as cocky as can be, and bragging 24/7. Well, I finally had to show him my real skills and whip him bad in beating in a game where I actually tried.

I see the same thing in Joshua. He just doesn’t seem to get it about the kind of opponents that Hearn has been feeding him. If it were me, I would be very worried about the Martin fight because I would realize that Hearn was feeding guys that were confidence booster type of opposition that you fight after you’ve been knocked out or badly dominated by a decision. You have to seriously see Joshua as a fighter that really has a record of 0-0 right now instead of 15-0, because he’s not fought anyone remotely as talented as the 6’5” Martin.

“In the Dillian Wyhte fight, he got real tired. He has no footwork, he can’t box, he can’t move. The only thing he’s relying on is his power and I’ve got more tools than that. I’m more than just a powerful puncher. I can do it all!”

We’re going to see if Joshua can keep it together when/if Martin drags him into the deep end of their fight on Saturday night and attempts to drown him. Martin already feels like he needs a knockout to win, so we could see him drop major bombs in the last half of the fight. Whether Joshua can handle those bombs are not remains to be seen. I just hope Joshua doesn’t gas out like an old car with 300,000 miles on it, because that would be so disappointing for the fans.

Haye: Khan has a massive shot of beating Canelo »