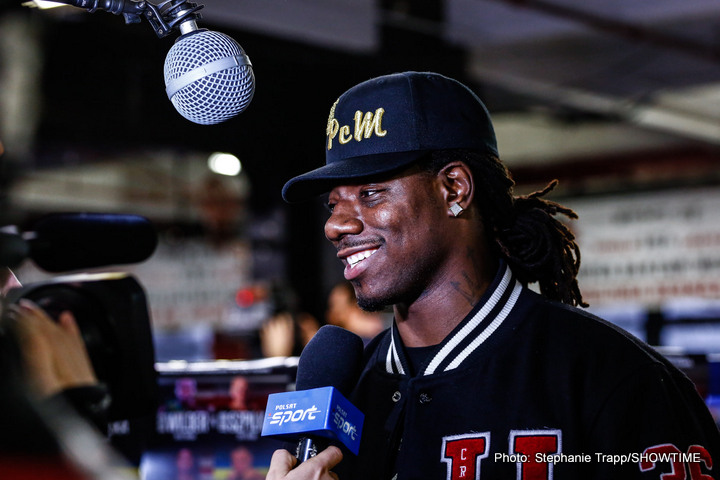 By Scott Gilfoid: WBC heavyweight champion Deontay Wilder sees this Saturday’s contest between giant heavyweights Charles Martin and Anthony Joshua as a purely 50-50 toss up fight that is impossible for him to pick a winner in. Deontay, 6’7”, says he would like fellow American talent Martin to win the fight, but he sees it as a tough one for him.

Ultimately, Deontay thinks the 6’5” Martin’s southpaw stance and his awkward fighting style could be too much for Joshua, who came from an amateur in fighting generally predictable orthodox fighters. Facing a guy that does everything backwards like the 29-year-old Martin is going to be a whole new experience from Joshua.

Further, Martin has excellent stamina, he’s not fat, and he’s not coming into this Saturday’s fight with a shoulder injury as far as I know. Joshua’s last opponent Dillian Whyte had a shoulder problem that was worsened in the 2nd round of their fight last January. Whyte also didn’t look in great shape, and gassed out after two rounds.

Martin is taller, hits just as hard, and doesn’t fade like Whyte. But more importantly, Martin isn’t coming into this Saturday’s fight with a shoulder problem like the one that handicapped Whyte against Joshua. For all intents and purposes, Whyte was a one-armed fighter against Joshua, and that’s perhaps the only reason why Joshua won that fight.

“Of course I am going to go with my fellow countryman,” Wilder said to skysports.com. “I feel Anthony Joshua hasn’t fought a top fighter like this yet. He [Martin] is going to be awkward. He’s a southpaw and that is a big thing because I don’t think Joshua has faced a southpaw yet, so he is going to find he is very, very awkward – both ways.”

Well, if you look at the way that Joshua has fought his previous 15 opponents, bum rushing all 15 of them, he’s going to potentially be putting his head into the mouth of a lion if he fights in such a primitive manner against a powerful fighter like Martin. I mean, it’s fine to fight in an amateurish way when you’re fighting fodder opponents like the ones that his promoter Eddie Hearn has been fixing up for him since he turned pro in 2013, but you cannot fight like that when you start to fight guys that actually know how to fight.

That’s why it’s so, so stupid to take Olympic fighters, even ones with controversial gold medals, and put them in with dreadful opposition in 14 of their first 15 fights as a pro. The type of fighters that your give dreadful opposition to are project type fighters that have a lot of improvements that they need to make in their game. These fighters need the poor opposition both for improvements and to help their low confidence. What you don’t want to do is put Olympic level fighters in with fodder opposition because it causes them to develop bad habits which can hurt them later on down the line when you stop spoon feeding them fodder.

We’re already seeing the bad habits that Joshua has developed from the fodder opposition. Instead of going out and being careful with his opponents and boxing them, Joshua just rushes out and throws wild shots until he scores a quick 1st or 2nd round knockout. That bum rushing style almost cost Joshua in his last fight against Whyte, when Joshua was clicked by a big left hook while throwing his primitive haymaker shots. It was lucky for Joshua that Whyte hurt his shoulder in that round because things could have been bad for him if not for that lucky break.

“This guy has as much height and reach as I do but he is awkward on top of that. I think it’s going to be a good fight and I am looking forward to seeing what happens and I want to see the result,” said Wilder. “I make it a 50-50 – this is too close a fight to call,” he said. “If he loses, I think a lot of people are going to be heartbroken and sad about it.”

Oh, you can bet that there will be a lot of Joshua’s fans heartbroken if he gets whipped by Martin on Saturday night. I can see a lot of fans crying big crocodile tears over Joshua’s loss. But instead of blubbering about Joshua’s loss, his fans need to be blaming his promoter Eddie Hearn, because he’s the one that put Joshua in with such awful opposition in the first 14 fights of his career.

Hearn is the one that failed to have Joshua’s trainer correct the mistakes he was making in his fights against his 3rd tier opposition. I mean, if you’re going to let your fighters faced D-level fighters, then you need to sit them down and tell them that his opposition is to help them develop skills. You want your fighter to learn how to actually box at the pro level, and you want them also to develop their stamina by going longer rounds.

What you don’t want is your fighter to blast out some poor sap in the 1st or 2nd round because that’s not going to help them. Hearn should have told Joshua to slow things down because he needs to learn from these fights, and most importantly, he needs to develop his stamina to fight longer bouts. We haven’t seen Joshua fight one 10 round bout since he turned pro. You can think the soft match-making that Hearn has set Joshua up for that, but also you can think the fact that Joshua wasn’t forced to slow things down with his poor opposition in order to develop his stamina.

The winner of this fight on Saturday between Joshua and Martin is going to be in great shape to get a big money unification fight later this year against the likes of Deontay or Tyson Fury. Those are fights that will bring a lot of sweet cash for the Joshua vs. Martin winner. Even someone like David Haye, who doesn’t rate a world title shot right now, would be an option for the winner of the Martin-Joshua fight. Haye has been talking about wanting to fight the winner of the fight. Well, I think they need to call Haye’s bluff to see if he’s serious by offering him the fight. It would be funny as heck of Haye started stammering and saying he’s not ready to fight the winner.

Adrien Broner: They let me out y’all »