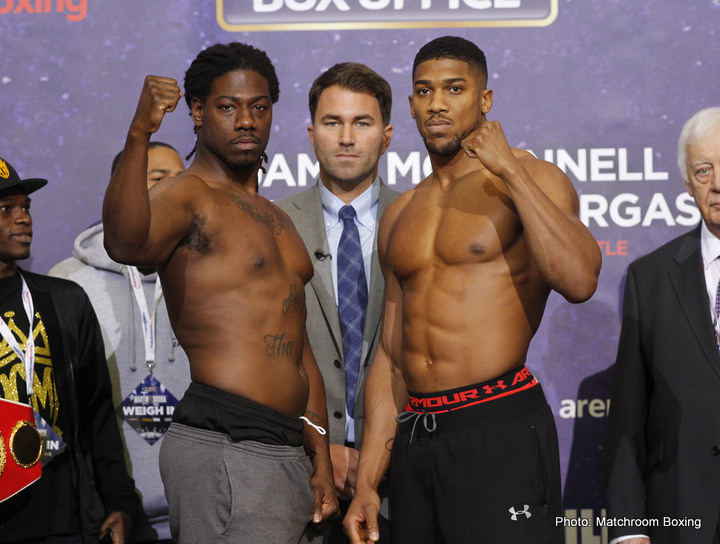 By Scott Gilfoid: For some reason, IBF heavyweight champion Charles Martin (23-0-1, 21 KOs) will be an underdog tonight when he enters the ring against unbeaten challenger Anthony Joshua (15-0, 15 KOs) at the O2 Arena in London, UK. Martin’s best chance of winning the fight is to take the heavily muscled 244lb Joshua into deep waters tonight before going for a knockout.

Joshua hasn’t had to go deep into his fights thus far due to the soft match-making that’s been done for him by his promoter Eddie Hearn, and there are some real concerns whether he has the stamina to fight longer fights. Joshua has transformed his once lean physique with lots of muscle since he turned pro, and it’s quite possible that the muscle would cause him to gas out in the later rounds.

Martin isn’t worried about the oddsmakers because he knows what he’s capable of doing when he gets inside the ring tonight. The one thing that Martin is concerned with is how Joshua’s fans will react when he knocks him out. Martin is wondering what the reaction will be. He’s not saying whether he’s worried about getting brained by something thrown from fans, but he definitely is curious how the fans will react.

Hopefully, Martin doesn’t get nailed by a thrown object from an angry fan after the fight. I hope there’s a lot of security at the O2 tonight. With the amount of hype that surrounds the 2012 Olympic gold medalist Joshua, Martin might have an audience of very unhappy campers if and when he knocks Joshua out tonight.

It might be in Martin’s best interest to make a beeline for the exit as fast as he can. You’d hate to see Martin get booed nonstop and whatnot while he’s trying to be interviewed in the ring. There’s a lot of boxing fans that will have paid good money to see Joshua, and they probably won’t be too pleased to see him exposed by Martin.

The oddsmakers at Bovada have Joshua at -500 and Martin at +350. I guess the betters are impressed with Joshua’s gold medal win in the Olympics or something because it’s hard to figure out why they would have him as the favorite based off the opposition he’s faced as a pro. Joshua has been fighting horrible opposition with the exception of Dillian Whyte, who had an injured left shoulder.

There hasn’t been anyone nearly good enough that Joshua has faced to have him as the favorite in the fight. If anything, Joshua’s opposition should hurt the odds rather than helping them, because it’s impossible for me to pick Joshua as the favorite based on his prior experience as a pro. Yes, Martin has faced opposition little better than Joshua, but at least he has one quality win on his resume in his 3rd round stoppage over Vyacheslav Glazkov last January. That will set Martin apart from Joshua. But beyond that, you can tell from watching Martin fight that he’s someone that arguably deserves to be the favorite in the fight. 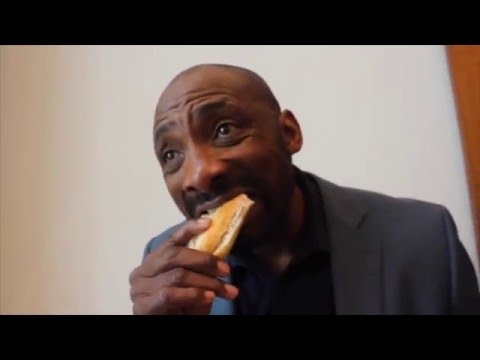 Martin is so calm, so accurate with his shots, and so powerful. He doesn’t miss, and he’s not easy to hit. Being a southpaw, makes Martin even more of an obstacle because he’s going to be throwing punches from the other side. Joshua hasn’t faced a quality southpaw since his amateur days when he was knocked out by Mihai Nistor. If you look at that fight, you’ll notice that Joshua was attacking Nistor early on in trying to stop him like he’d done against lesser opposition. However, Nistor kept nailing Joshua with huge left hands to the head that caused him to become defensive.

Nistor then went on the attack and halted Joshua with a left to the head after the referee gave Joshua a standing eight count. If Martin takes the fight to Joshua like Nistor did, then we could see Joshua tasting defeat tonight in the same way because he does not seem capable of tracking punches thrown to his fight side for some reason. Joshua is mainly good at picking off shots thrown to his left side.

“I’m not going to go in there respecting anybody’s power,” said Martin. “He’s going to have to respect me and my power and deal with me and my tools. I don’t care what he’s bringing to the table…I don’t think about where he’s been. All I care about is where he’s going. I don’t care if he’s been in deep water before, or how many rounds he’s been. I want him to remember the word ‘timber’ because I’m going to make his [expletive] hit that canvas real hard.”

There it is. Martin says he plans on putting Joshua on the canvas tonight. Joshua will need to be concerned with the shots that Martin is hitting him with tonight because if he forgets about his defense like he did in his last fight against the injured Dillian Whyte, then it could be all over for Joshua. Martin is a next level talent, and Joshua has to be careful at all times tonight if he doesn’t want to get blasted out straightaway. 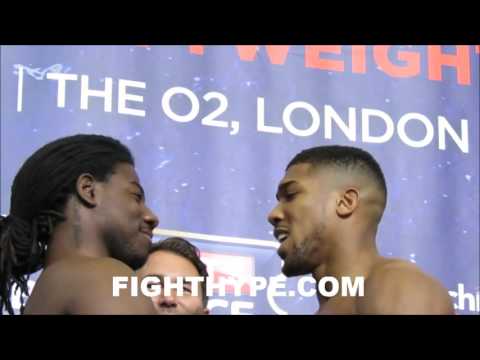 Up until now, Joshua’s promoter Eddie Hearn has done an incredible job of matching him against beatable fighters with little in the way of talent and or power. The only decent fighter that Joshua has faced was Martin, but he came into the fight with an injured shoulder. Did Hearn know about Whyte’s injured shoulder? Is that why he got the fight with Joshua? I’m not sure, but I think Joshua would be 14-1 right now if Whyte had a healthy shoulder on the night.

You’d hate to see the winner of tonight’s Martin vs. Joshua fight to lose their ambition after they make a bundle of money. If you look around at the top fighters over the years, many of them have lost interest in fighting after they’ve made a bunch of cash. I wouldn’t be surprised if that’s what happens with the winner of the Martin-Joshua fight. If you see the winner of the fight tonight buying expensive fur coats, diamond rings and cars worth millions, then it might be a sign that they could soon lose their ambition to keep fighting. I hope not because it’s so sad how fighters get lazy after they make some cash.