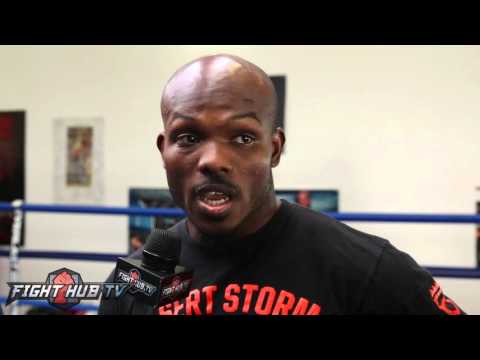 By Chris Williams: Tim Bradley (33-1-1, 13 KOs) says he could take it to the inside to wear down the older Manny Pacquiao (57-6-2, 38 KOs) with body shots on Saturday night in Pacquiao’s last fight of his career. Bradley had success throwing to the body in his recent fight against Brandon Rios last November in scoring a 9th round knockout.

If Bradley had thrown nothing but head shots, Rios likely would have been able to take those shots without any problems.

Pacquiao is also the type of fighter that can usually take hard head shots without getting hurt. One exception was in his fight against Juan Manuel Marquez in 2012. Marquez knocked Pacquiao clean out right a right hand to the head. Bradley doesn’t have Marquez’s same punching power, and he’s never been able to get a lot of knockouts when throwing head shots. Body punching is the thing that Bradley has done the best in his career.

We saw how Bradley was able to end the career of former two division world champion Joel Casamayor in stopping him in the 8th round with a body shot in their fight in 2008. Stopping a fighter as good as the Cuban veteran Casamayor with a body shot gives you an indication of Bradley’s ability to throw hard body shots when he wants to.

“He’s an older guy, you definitely wanna wear him down,” said Bradley to Fighthub.com about hurting Pacquiao potentially with body shots this Saturday night. “You wanna get inside and work him to the body in certain spots. Wouldn’t you take advantage of that? He’s older, he’s got a lot more miles than I do on my body. Taking it inside, why not? Teddy has taught me how to fight well on the inside, how to protect myself on the inside a lot better than I have in the past. So if I need to be inside, that’s where I’m gonna be.”

Pacquiao is not a good inside fighter, and I think he’ll be looking to avoid that at all costs. Pacquiao was using a lot of in and out attacks in his last fight in May of last year against Floyd Mayweather Jr. If Pacquiao knew how to fight on the inside, that would have been the fight to do this because Mayweather was timing Pacquiao with right hands each time he would come forward looking to land. It was almost embarrassing to watch because Mayweather connected with some big shots. After a while, Pacquiao looked afraid to come forward.

“If he loses again, that would definitely put in his mind that he should retire and step away from boxing,” said Bradley about Pacquiao. “If I have anything to do with that, of course that’s what we wanna do. We definitely wanna retire him. He says he wants to retire, so I wanna push him out the door.” 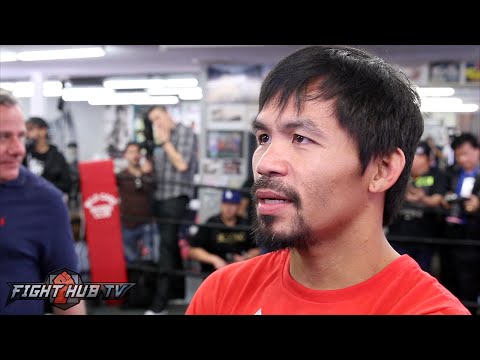 Pacquiao obviously doesn’t want to end his career with a loss, but I think that’s what’s very likely to happen. I don’t know if the 37-year-old Pacquiao needs a win or not for him to get elected into the senate in the May elections in the Philippines. If Pacquiao does need a win to get elected, then I see him potentially being out of luck.

Bradley could ruin his shot at winning that election, and then he would be forced to do something else with the remainder of his life. I don’t think Pacquiao will continue his boxing career if he loses to Bradley because a loss here would be a sure sign that it’s over for Pacquiao. Normally, it wouldn’t be over for a fighter if they were beaten by Bradley, because they could then target one of the other champions. However, with Pacquiao’s promoter Bob Arum not doing business with Al Haymon’s fighters, it pretty much means that Pacquiao could turn around and fight the other champions Danny Garcia and Keith Thurman.

Pacquiao could fight Top Rank fighter Jessie Vargas for his WBO 147lb title, but that’s not a sellable fight. That’s another Chris Algieri type of fight that would be lucky if it brought in 200,000 PPV buys on HBO. I don’t think Pacquiao-Bradley 3 will bring in many PPV buys despite the late promotional push by Top Rank. I don’t think the fight brings in more than 400,000 pay-per-view buys top. My guess is the fight will do 250,000 buys, and those will be from Pacquiao’s diehard boxing fans rather than from casual fans with nothing to do on Saturday night with their $70.

In hindsight, this was just a really dumb idea for Arum to match Pacquiao against Bradley again. Arum says it was Pacquiao that made the choice to fight Bradley. If that’s the case, then he should have shaken sense into him by telling him in a firm manner that you cannot make a fight between him and Bradley after the Pacquiao vs. Floyd Mayweather Jr. fight. There’s a lot of boxing fans that are still very angry about the poor quality of the Mayweather-Pacquiao fight, and about the huge costs of the fight. Nothing was good about that match, and the undercard was one of the worst I’ve ever seen in terms of appealing fights.

Fans felt like they were totally gauged by the fighters and the promoters of that fight. That’s why it’s such a bad idea for Pacquiao to be fighting an old retread opponent like Bradley. What Pacquiao and Arum should be doing is trying to make it up to the fans by facing the very best possible opponent.

I think Pacquiao and Arum would have been better off facing Saul “Canelo” Alvarez for this fight instead of the retread Bradley. If not Canelo, then they should have selected Amir Khan or Adrien Broner. We just saw how Broner broke records on Spike TV last Friday night in his fight against little known Ashley Theophane. If Broner was able to bring in big numbers against a guy like Theophane, then just imagine the numbers that he would help bring in for a fight against Pacquiao. It was a bumbling move on Arum’s part to stick Pacquiao with Bradley again, and now they’re going to find out the hard way in seeing what a mistake it was in seeing the PPV sales turn out to be dismal.

« Haye: Khan has a massive shot of beating Canelo