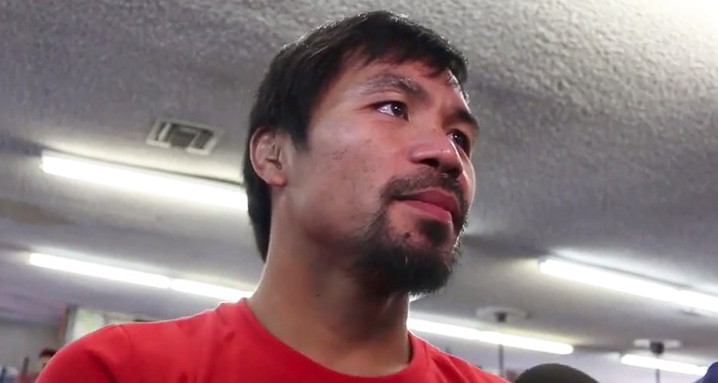 By Chris Williams: Manny Pacquiao’s promoter Bob Arum said this week that he’d like to match him up against WBC middleweight champion Saul “Canelo” Alvarez at a catch-weight of 155lbs this year if Pacquiao gets past Tim Bradley this Saturday night, and if Pacquiao doesn’t decide to retire after the fight.

Arum thinks it’s a doable fight that he can setup now that he’s doing business with Canelo’s promoters at Golden Boy once again. However, Pacquiao doesn’t sound too interested in fighting the much heavier and younger Canelo Alvarez judging by his comments. Pacquiao says he just wants to fight Bradley this Saturday night, and then go back home to the Philippines so he can help his people.

In other words, Pacquiao still seems committed to retiring after the Bradley fight, and he seems to think he’s going to get elected into the senate in the May elections in the Philippines. That’s the job that Pacquiao feels will be a real time consuming thing for him, and he doesn’t seem to think he’ll have the time to continue his pro boxing career.

“I don’t know about that. I have no idea. My mind is all set on the fight that is coming on April 9, and after that, going back to the Philippines to focus on helping the people,” said Pacquiao.

I think Pacquiao would still have time to continue his boxing career even if he were elected into the presidency of the Philippines. After all, this is Pacquiao, and he’s kind of national icon in the Philippines. Sure, he’d have some fellow politicians possibly taking shots at him if he were to continue fighting, but I think the people would ignore them and still be more than happy to see Pacquiao continue his pro career.

The real question is would Pacquiao want to fight a slugger like Canelo? That would be a real tough fight for Pacquiao, and you could imagine that he’d be giving away as much as 20, possibly even 30 pounds to Canelo. If Pacquiao is coming into his fights at welterweight in the 147 range, you can bet that Canelo would rehydrate to 175 to 180. That’s pretty much 30 pounds more than Pacquiao. Arum likes to bring up how Pacquiao beat a bigger Oscar De La Hoya in 2008, but that was a drained, old and inactive De La Hoya, who made stupid decision to agree to come down to 147 to fight Pacquiao.

That was the dumbest move you could imagine because De La Hoya didn’t have to do that because he was the A-side. It was a crazy move. De La Hoya was way past his best by 2008, and he wasn’t going to be able to drain down to 147 without weakening himself dramatically, which is what he did in taking all that weight off with the help of a lean diet of buffalo meat.

De La Hoya actually dieted down to the weight class rather than using the Canelo method of just draining water weight the week of fight and then ballooning up to light heavyweight to crush his lighter opponents. 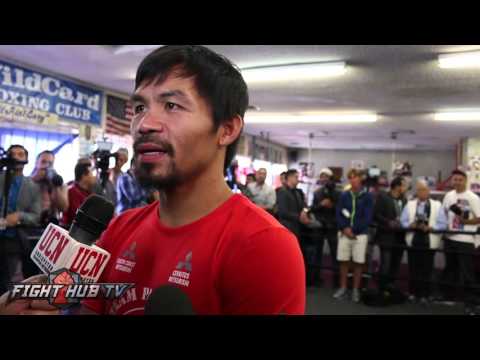 I don’t think Pacquiao wants to fight Canelo, and I can’t blame him. We’re about to see welterweight Amir Khan get taken apart by Canelo in their fight next month on May 7. After that likely massacre, I don’t think Pacquiao is going to want any part of the huge Canelo. The guys that should be fighting Canelo are fighters like Gennady Golovkin and Daniel Jacobs. Even those fighters would likely be giving up weight to him.

If Pacquiao needs the money, then perhaps Arum can talk him into taking the fight against Canelo this year in September. After all, Pacquiao would make more money in the Canelo fight alone than he’ll ever make as a politician in the Philippines.

Pacquiao should just take the cash while it’s still there, and then he’s got the rest of his life to do the politician thing. According to Imoney.ph, senators in the Philippines make $111,000 a year, and presidents make $120,000. I don’t know about you, but I think Pacquiao would be better off making as much loot as he can in his boxing career before he devotes the rest of his life in politics in the Philippines. That’s got to be a stressful job.

Pacquiao should take the Canelo fight, and forget about a life in politics. I don’t think it’s going to make him happy dealing with the headaches involved with a life in office. Even if Pacquiao does get elected, there’s no telling whether he’ll be able to hold onto his seat. Pacquiao would be better off staying in the sport of boxing for another five years until he’s absolutely totally shot. If Pacquiao does continue his pro career, then he needs to lean on Arum to have him stop fighting the same guys over and over. Arum needs to start matching Pacquiao against non-Top Rank fighters because Arum doesn’t have any big names any longer now that Miguel Cotto is no longer in his stable. Pacquiao needs to be matched against fighters like Danny Garcia, Canelo, Amir Khan, Kell Brook and Keith Thurman. Those are not Top Rank guys, but they’re guys that will bring better money than if Pacquiao gets stuck fighting Bradley over and over again for the next two or three years until he retires. Those guys will also bring more money than if Arum sticks Pacquiao in with his other Top Rank stable fighters Terence Crawford and Jessie Vargas.

Canelo would probably love the idea of fighting Pacquiao in September. If Golden Boy Promotions can setup Canelo with a fight against Pacquiao, then Canelo would have a built in excuse for why he doesn’t have to fight Gennady Golovkin. I don’t think Canelo wants to take that fight, and you can’t blame him. It’ll be a tough fight. Pacquiao should take as much money he can while he can.

If Arum can’t get Pacquiao to take the fight with Canelo, then he should try and talk Golden Boy to let his ace in the hole fighter Crawford to fight Canelo. Arum can’t match his fighter Gilberto Ramirez against Canelo because he’s not popular enough yet.