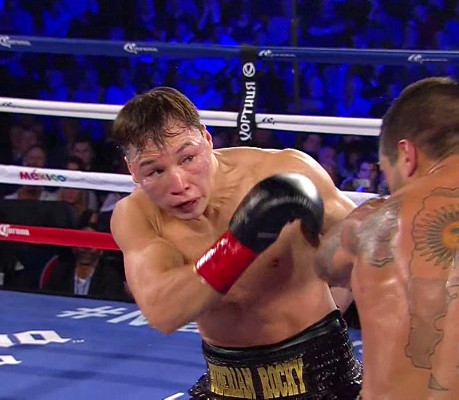 By Chris Williams: Top Rank promoter Bob Arum is working on a fight between his fighter WBO light welterweight champion Terence “Bud” Crawford (28-0, 20 KOs) and #2 WBO Ruslan Provodnikov (25-4, 18 KOs) that he’s working on for July 23 at the Forum in Inglewood, California.

Provodnikov’s management are interested in the fight, but they had one condition and that was for it not to take place in the 28-year-old Crawford’s hometown of Omaha, Nebraska. However, with the fight not taking place in that location, it’s unknown if they’ll be able to sell any tickets.

“Artie [Pelullo] said they would want to do the fight as long as it wasn’t in Omaha, which is fine with us,” Arum said to espn.com about Provodnikov’s promoter Artie Pulullo.

While the 32-year-old Provodnikov is ranked at #2 by the World Boxing Organization, his career isn’t exactly going smoothly right now. If you were to judge Provodnikov on his results in the last three years, you would say he doesn’t deserve to be ranked #2 by the WBO. That’s just an oddball ranking. Provodnikov has lost 2 out of his last 4 fights and 3 out of his last 6. In other words, Provodnikov’s record in his last six fights is 3-3.

That’s not too good, is it? The fact that Arum is eager to make a fight between Crawford and the struggling Provodnikov kind of gives you an indication of the shape Arum is in with not having any big names that he can match against Crawford. Ideally, Arum should be looking to match Crawford against fighters that will turn him into a star. That’s not what we’re seeing happening though.

In Crawford’s last three fights, he’s faced fringe contender Hank Lundy, fringe contender Derry Jean, and Thomas Dulorme. Those are not big names, and they definitely are not the type of guys you put your fighter in with if you want to turn them into stars. Those are what you call record-padding opponents and nothing more than that. Lundy was in the same boat that Provodnikov was in before his fight with Crawford.

Lundy had lost 2 out of his last 4 fights before being picked out to fight Crawford. Why a fighter with a record like that was picked for Crawford to defend his title against makes you wonder if Arum is able to match Crawford with the names that he needs to in order to turn him into a star.

You can make an argument that Crawford is the equivalent of being a fast race car that is capable of winning races. But instead of Arum putting Crawford in the races that would turn him into a star, he’s putting him in the equivalent of go-cart races with kiddies. Crawford is not even being tested by the poor opponents that Arum is matching up against him. Now we’re about to see Arum put Crawford in with an equally poor Provodnikov, who was torn to bits by Lucas Matthysse last year in taking a frightful beating from the Argentinian fighter. Provodnikov did rebound to win his last fight against little known Jesus Alvarez Rodriguez, but this was against an obscure fighter.

What’s sad is that Provodnikov is a step up for Crawford from the poor opponents that Arum has been matching him against. What’s sadder is that it wouldn’t be surprising if Arum winds up having Crawford and Provodnikov fight each other over and over again in rematch after rematch. I don’t think Arum has the bodies to put in with Crawford, so we may be enterting rematch city with the Crawford-Provodnikov fight.

It’s too bad Crawford and Tim Bradley are good friends, because both guys are with Top Rank and Arum could probably have them face each other three to four times over the next two years. It would make for interesting fights if Arum doesn’t find some talented fighters to match against these guys. Crawford shouldn’t hold his breath waiting for a fight against Manny Pacquiao because he’s retiring after his fight next month on April 9, and he’s not expected to come back. If Pacquiao does come back, it’s not probable that he’ll fight Crawford.

« Golovkin vs. Saunders possible for the summer

Spence: I want to make it one-sided against Algieri »