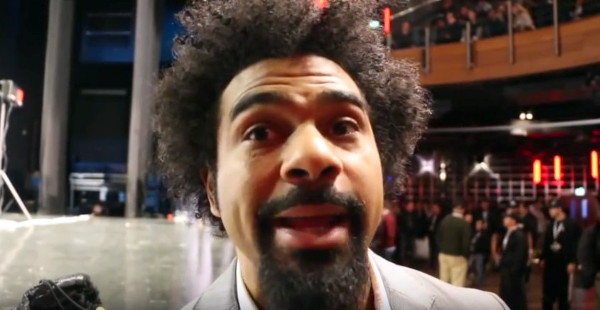 By Scott Gilfoid: David Haye (27-2, 25 KOs) says he hopes to have some news about his next opponent by next week for his May 21 fight at the O2 Arena in London, UK. Haye, 35, says he has four candidates he’s looking at for his next fight. However, it seems he’s got one guy that he’s focusing on more than the others. 44-year-old Shannon Briggs is one of the candidates.

Haye made a comeback last January after being out of the ring for close to four years. He defeated an obscure fringe contender in Mark De Mori that the World Boxing Association had surprisingly ranked in their 10.

They were the only sanctioning body that had him listed as a top tier contender. I had seen a ton of De Mori’s tweets in the past, but it was always him lifting huge amounts of weight and posing like a bodybuilder/weight lifter. I was surprised then when I saw De Mori ranked in the top 15 by the WBA.

“I’m trying to find someone who’s got a history of being tough and being in exciting fights,” said Haye to skysports.com. For me, that’s the key now so we are talking to a few people. Within a week or so, we should have something. We’re still over 12 weeks from the fight. I’m happy with where I am. I’m back in training, feeling good and tickets are selling well for May 21.”

I’d like to think that Haye will select someone good for his next fight, but given the news that Briggs is one of the candidates for his next fight, that kind of tells you the direction Haye is going in for his next fight on May 21. I’m just wondering who would be willing to pay to see Haye fight an old timer like Briggs? Who knows? Maybe the British fans would lap this fight up like it’s cavier or fine wine. Personally, it’s not my cup of tea. Haye needs to do a lot better than this to interest me in seeing his fight. If he could step up a couple of levels from his last gawd awful opponent to face someone like Carlos Takam or Kubrat Pulev, I would be interested in that. Heck, even someone like Chris Arreola would be a dramatic improvement over the likes of De Mori. But as far as Haye vs. Briggs, I’m not interested in that mismatch.

« When the best fought the best