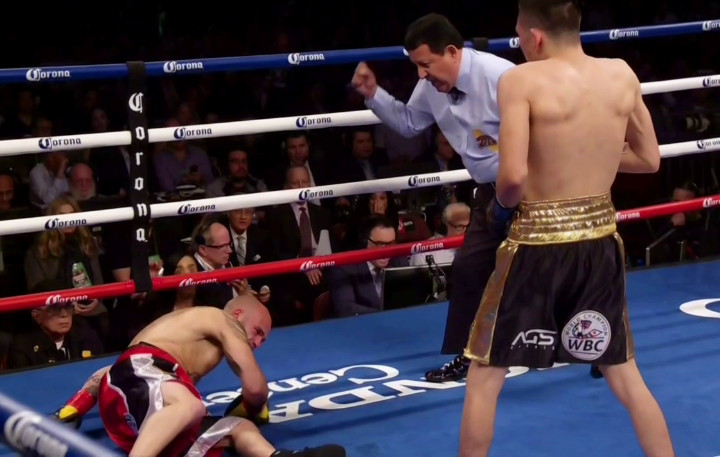 Santa Cruz dropped Martinez in the 1st round. Four rounds later, he finished him off with a blizzard of punches in the 5th round to get a stoppage. In between all this, the two fighters threw shots at close range in a phone booth type fight.

Martinez fought well enough to deserve to win the 4th, but Santa Cruz stepped up the pace in the 5th to get a stoppage. All Santa Cruz did was throw nonstop punches until the referee Raul Caiz Sr. was forced to step in and halt the fight at 2:09 of the round to protect Martinez from getting hurt.

“I’m up for anyone,” Santa Cruz said after the fight. “I want the rematch with [Abner] Mares. Since Frampton won, if he’s ready to go up in weight, I’m ready for him. I challenge him to a fight whenever he’s ready,” said Santa Cruz.

After Santa Cruz’s close call 12 round split decision win tonight against Scott Quigg, I think it’s safe to say that there won’t be a Frampton vs. Santa Cruz fight. I doubt that Frampton’s management are going to let him get anywhere near Santa Cruz. Frampton looked too small for Quigg at super bantamweight. No way will the promoters for Frampton let him move up top featherweight to face a big puncher like Santa Cruz. Santa Cruz needs to go in another direction. I doubt that fans will want to see him fight Mares again. What a terrible idea.

In an example of a paper champion getting obliterated, #6 WBC challenger Hugo Ruiz (36-3, 32 KOs) made easy work of WBC super bantamweight champion Julio Ceja (30-2, 27 KOs) in stopping him in the 1st round.

Ruiz dropped Ceja with a big right hand in the 1st round. Ceja was injured during the knockdown. When the action resumed, Ruiz flurried on Ceja until he fell into the ropes and was helpless as the referee Tom Taylor stepped in to halt the fight at 0:51 of the 1st round.

With the win, the 29-year-old Ruiz avenged his 5th round knockout loss to Ceja from last year in August. In that fight, Ceja was knocked down in the 3rd and Ruiz in the 5th. Neither of these guys have any defensive skills, and it’s surprising that the World Boxing Council had Ceja as their champion. The WBC has Guillermo Rigondeaux ranked at No.3 with their organization. I think Rigondeaux would beat Ceja and Ruiz on the same night. The WBC needs to get their ranking system worked out so that there are better fighters holding their titles. We just saw Danny Garcia win the WBC welterweight title recently in a fight against Robert Guerrero. An arguably much better fighter than either of those two, Errol Spence, is ranked only #6 by the WBC.

« Mosley: Khan is making a mistake in bulking up