Who can be the man to defeat Golovkin? Rating the contenders – Saul ‘Canelo’ Alvarez 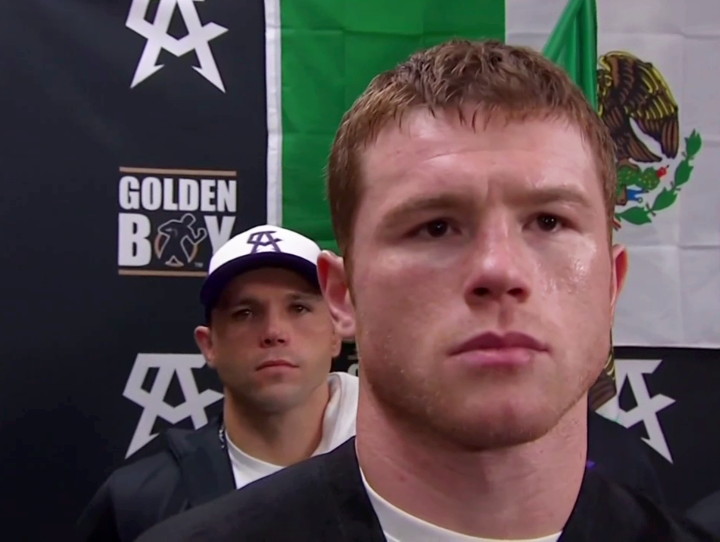 By Al Classico: The proposed mega fight earmarked for September 2016 between Saul ‘Canelo’ Alvarez (46-1-1, 32 KO’s) and Gennady ‘GGG’ Golovkin (34-0, 31) took a step backwards last week when it was announced that Canelo would opt to defend his ‘middleweight title’ against a welterweight fighter in Amir ‘King’ Khan.

While this announcement of Khan as an opponent for Canelo was a shock to the boxing world in itself, the bigger implication of this announcement is that the Canelo-GGG now looks less likely to happen anytime soon. Most fans and people in the know were expecting Canelo to defend his title in May against a lesser risk middleweight such as a Gabe Rosado in order to test the waters at the full 160 weight limit and to prepare for GGG in September.

With Khan as the opponent of choice for the May date, it appears that Canelo has been steered into a different direction with the preference on matching him up with ‘big name’ fighters rather than the ‘big game’ fighters. That’s not to say that the GGG fight won’t happen, it may still go ahead at some point but probably not as soon as most people would like. Canelo is a big draw at the moment so it makes business sense to keep matching him with low risk and high financial reward fighters while the going is still good.

If’s, should’s and but’s aside though, lets take a look at what Canelo could bring into the ring if he does eventually face the ‘Kazakh Killer’ and what chance he would stand of defeating him.

Canelo is a very talented fighter who has some fantastic boxing skills, however it is difficult to rate how good he really is since he has not fought at a proper weight class for quiet some time nor has he been dominant in his wins against quality opposition when the weights have been on a level playing field (e.g. Lara, Trout).

He certainly does posses some strengths though so let’s examine what they are and how they could cause problems for GGG in their fight, assuming that it does go ahead. Canelo has very fast hands and his trading in the pocket may be second to none. He is an expert combination puncher who throws powerful volume shots into the body and follows up with thunderous uppercuts and hooks to the head. The opponents who have stayed in the pocket with him and tried to exchange have always come out second best ( e.g. Kirkland, and Trout when he got dropped, just to name a couple). This fighting style is Canelo’s bread and butter and anyone who tries to engage in this way walks straight into his biggest strengths. Exchanging in the pocket or getting his opponent cornered or backing up against the ropes is where he does his best work and worst damage!

He is normally the aggressor in his fights and tends to either stay in the middle of the ring or attempts to walk his opponents down. It’s hard to say whether this is because he is almost always the bigger guy or whether this is part of his DNA but the answer would definitely be revealed if he ever fought GGG. He is physically strong and can push his opponents around, however again it is unclear if this is due to his real strength or relative strength against smaller opponents, another question that will be answered in a fight against a true middleweight.

Another strength that Canelo has which is underrated is his defense, especially his in-the-pocket defense where he is able to dodge and evade punches with his head and torso movement. He anticipates well and is able to counter from this position, something that he no doubt adopted from the Mayweather style. This was on display in his fight against the smaller Cotto where he was able to land big counters on the back of his defense. He also holds a responsible guard and doesn’t leave his chin exposed to counter hooks. He demonstrated this in his 3 round destruction of the big punching James Kirkland, where he went toe to toe but always maintained the integrity of his guard.

His other strength which may also be a weakness is his willingness to take on tough challenges and high risk opponents. Although he hasn’t faced many he has taken fights against high risk, low reward fighters in Erislandy Lara and Austin Trout, one of which was very close and the other which could have gone either way. But credit where it’s due and Canelo has personally demonstrated a willingness to fight the best, however a lot of the decision making is left to his advisers and managers on who he fights and for this he has received criticism for often fighting smaller opponents.

He doesn’t have too many weaknesses but the weaknesses that he does have are fundamental. His biggest weakness is his footwork which is a massive achilles heel. The most fundamental skill of boxing is footwork and this dictates a fighters ability to get into and out of position and utilize their strengths. His footwork has been exposed by mobile and technical fighters, none more brutally than Mayweather who absolutely schooled him in the art of boxing and to a lesser but equally effective degree in Lara and Trout. He has top class upper body skills but unfortunately without good footwork and an inability to cut the ring off,  these skills cannot be delivered.

His in-the-pocket defense will not be enough to evade GGG’s punches for a full 12 rounds and his footwork is nowhere near as proficient as that of Golovkin’s so it is likely that his defense will be penetrated often by the guile and power of the bigger man. ‘ You can’t start constructing a building from the first floor’ is  a saying which very much applies to the fight game. If you don’t have the fundamental footwork, nothing else matters and sooner or later you will get exposed by someone who does.

His other big weakness is lack of power which is not noticeable at the lower weight classes because of his size advantage and fast combination punching, however at middleweight he is not likely to be able to hurt many opponents and his defense is not good enough to be able to pot shot and outbox his way to victory as Mayweather has been able to against bigger opponents.

So, how is the fight likely to play out?

Initially it will be a slightly cagey affair as Canelo will be reluctant to press forward given his respect for GGG’s power. GGG and his trainer will have already figured out Canelo’s weaknesses from watching him and will probably waste no time in getting to work. At the first exchange they will both feel each others power and as soon as that happens Canelo will realize that he is way out of his depth and will probably start retreating. GGG will not be hurt at all by Canelo’s power and will simply walk him down over 5-6 rounds by utilizing that stiff jab and precision power punching. Although Canelo is a warrior at heart and will offer his best resistance through some definite counter and combination punching, it simply won’t be enough as GGG will systematically and brutally break him down with his superior tactical, technical and power attributes. The fight is likely to end in a TKO win for GGG or Canelo retiring on the stool somewhere around the 7th-9th rounds.

Let’s keep our fingers crossed that Canelo’s latest opponent of choice is not a sign that he will likely avoid GGG as this is a fight that boxing fans most want to see in 2016. Please leave your comments and thoughts below about this potential match up as I would love to hear your opinions on how the fight would play out if it eventually gets made!