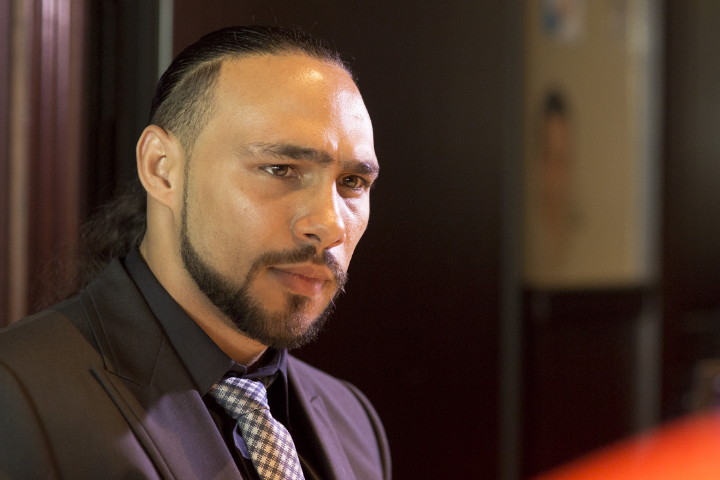 (Photo credit Esther Lin/Showtime) By Dan Ambrose: If WBA World welterweight champion Keith Thurman (27-0, 22 KOs) can get past his tough challenger Shawn Porter on March 12 in their fight on Showtime, Thurman says he’s going to be looking to get a unification fight against WBC welterweight champion Danny Garcia (32-0, 18 KOs).

Thurman wants to carve a legacy of his own and take over the welterweight division now that Floyd Mayweather Jr. has retired. Thurman also believes that the only way to get the super money that Mayweather was getting for his fights is to take the risky super fights against the likes of Danny Garcia.

Thurman believes that if he wins enough of the smaller super fights, he’ll eventually get the big money. Thurman isn’t afraid to lose his ‘O,’ he says. We’re going to find out whether Thurman is serious about that because after the Porter fight, he’s going to have guys like Errol Spence Jr. looking to take his scalp, and thus far, Thurman has been reluctant to take the fight with Spence.

“No disrespect to Team Garcia but he’s very vague when he talks about what’s next for himself and his career,” Thurman said to Fighthype. “No disrespect, Al Haymon manages all of us, and he does it in a tremendous fashion and he does have options. He’s just the kind of fighter that says ‘I have options and we’re going to see what’s next.’ He’s not outspoken like your boy. Easy money does not bring big fights. They don’t bring super fights. Super fights bring big money and then eventually super money. I am trying to take over the division. I want Shawn Porter.

Garcia is intentionally vague about his plans. Garcia and his father Angel appear to come from the old school of not naming names of guys they would like to fight, because once you start naming names, then they either raise their price or look to avoid the fight. Garcia and Angel likely have their eyes on someone. Whether it’s a good fighter or not is unknown. They haven’t taken too many risky fights lately where they weren’t considered the favorite going in. Now that Garcia is the WBC champion, it’s going to put a little more pressure on him to fight better opposition than he was fighting as the WBA/WBC light welterweight champion. Hopefully, Garcia doesn’t duck an opponent like he appeared to do when he opted to side step a fight against Viktor Postol by vacating his WBC 140lb title.

“I’ve been wanting Shawn Porter just like I wanted Robert Guerrero a year before I got Robert Guerrero,” Thurman said. “I wanted Shawn Porter a year before I got Shawn Porter. As soon as Danny Garcia stepped foot at 147, yeah, I got my eyes on you. Now you’re wearing the green belt [WBC welterweight belt]. Keith Thurman has a vision. It looks like two belts. 2016, we doing to get it in. With a victory [over Shawn Porter], we want Danny Garcia. Two welterweight, undefeated champions if it does down later this year. I got to get through Shawn Porter. I’m talking legacy. Floyd ain’t in the business no more. I can’t be a legend overnight. beating a legend, that’s one way of creating a legacy. That’s not an option right now. Now I have to pave my way and create my own legacy. That means getting through Shawn Porter. That means challenging Danny Garcia. Somebody is going to have two belts and somebody is going to have an O turned into a loss. You know my motto; I have an O and I’m not afraid to let it go. If you can beat me, beat me. I know you don’t think a slap upside the head is fun, but I do. I got a different colored blood. I’m a fighter. I’m a warrior. I’m ready to die,” Thurman said.

Thurman is talking like he’s a pretty fearless guy, but his talk doesn’t match his fighting style and the opposition has been facing. Thurman does not like to stand and trade with his opponents. He stands in the pocket even less than Floyd Mayweather Jr, which seems kind of odd because Thurman has a lot more power than Mayweather ever had.

Thurman had a chance to fight a dangerous opponent in Errol Spence, but instead fought an aging 34-year-old Luis Collazo in his last fight and was almost knocked down by him. Fighting Porter is a good fight for Thurman, but I don’t think it’s nearly as dangerous a fight as it would be if Garcia fought Spence.